Review: the Fenix TK20R tactical flashlight is a high-value target 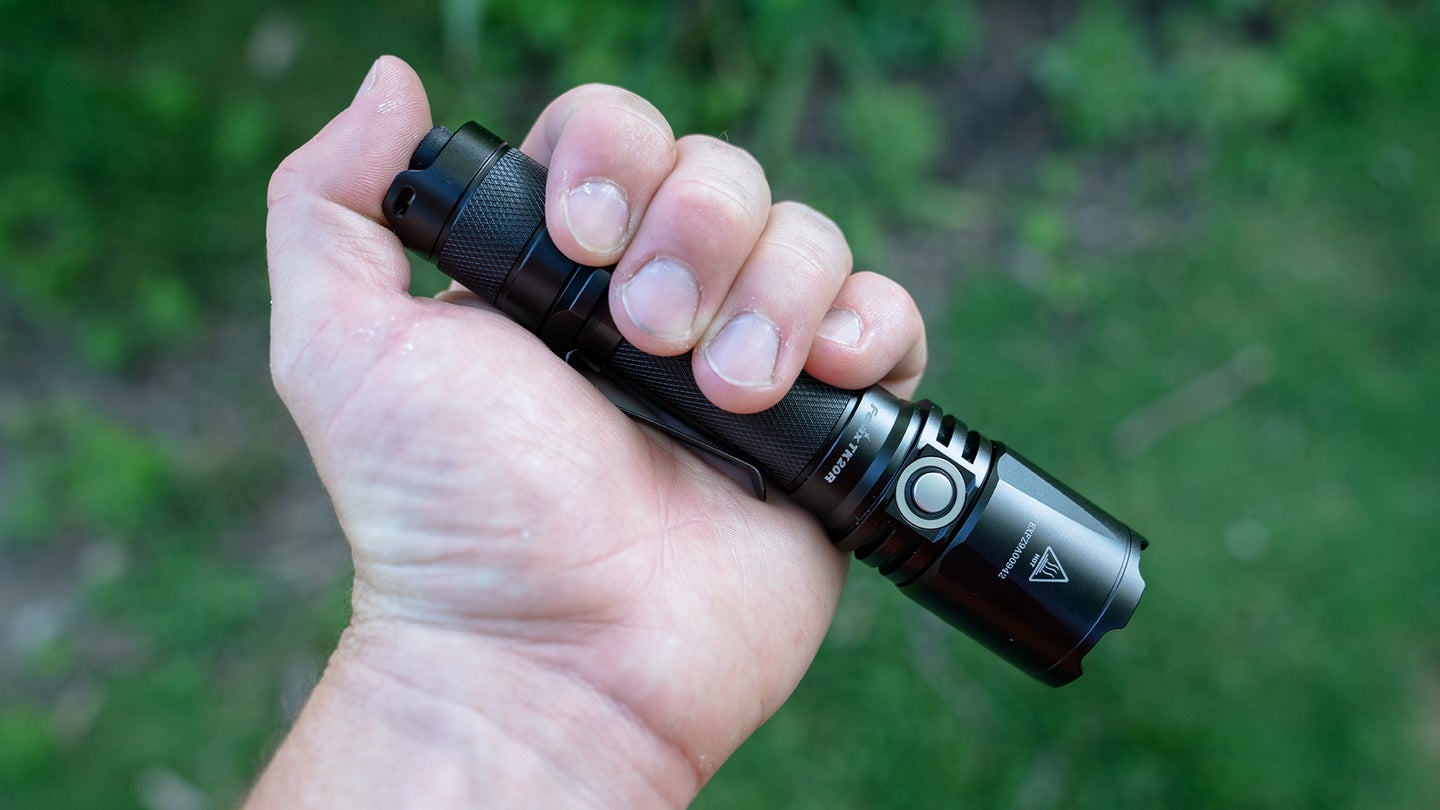 I enjoy well-built equipment, but I get extra excited when I find a quality item that can also save me money. The trouble is that it’s hard to know what’s a bargain and what’s just cheap. You can spend a lot of money trying to save a few bucks with gear that doesn’t cut it, so you better be able to tell the value items from the fakers.

This is especially important when buying tactical gear that you could end up relying on in a life-or-death situation. In the world of tactical lights, there are basically two categories: flashlights that are built to a truly rugged standard, and imitators that look the part but can’t back it up. You can find cheap options for less than $25 all day long, but I wouldn’t want one of those on my rifle in an after-hours ammunition exchange. Then again, I’m not too excited about dropping $200 or $300 on a flashlight.

That brings us to Fenix. You’ll generally find Fenix lights in the middle of the price spectrum, with the TK20R costing ​​around $100 on Amazon. They’re priced higher than the no-name brands, on par with Streamlight, and lower than Surefire. One reason Fenix is able to price its lights so competitively is outsourcing. Despite being marketed as a Colorado company, Fenix owns a factory in Shenzhen, China.

The immediate question, then, is this: is the Fenix TK20R tactical flashlight a bargain from a vertically integrated company that’s passing on the savings, or a wannabe whose best asset is its price tag? That’s exactly what I planned to find out.

The Fenix TK20R’s spec sheet is a promising start. The six-inch by 1.34-inch body is built from two layers of aircraft-grade aluminum, knurled for grip, and anodized in black. Weight comes in at just a shade under five ounces. The long-life LED is good for 50,000 hours and can produce an output of 10, 150, 350, or 1,000 lumens. There’s also a 1,000-lumen strobe function for tactical use. Battery life fluctuates based on output and external factors like temperature, but Fenix lists run times ranging from 160 hours at 10 lumens to two hours at 1,000 lumens. Rubber seals protect against dust and water to a claimed depth of two meters.

That’s all standard fare for tactical lights, but the TK20R goes further with several nice upgrades. Most notably, the flashlight remembers the last setting that was used when you turn it on. That makes a huge difference because you can set it up the way you want and not have to cycle through all four settings every time, allowing you to preserve your night vision when checking a map or be prepared to light up the night with a 1,000-lumen beam. Output settings are selected by clicking the side-mounted function button, and the strobe is activated by holding it regardless of the current setting. I like having that option readily available.

The rechargeable battery is another perk. The TK20R can use traditional batteries (and two are included), but being able to charge it with a micro USB cable means that you can basically take it off-grid forever with a small solar charger. A small indicator light keeps tabs on battery life, so you don’t have to wonder how much charge you have left.

How we tested the Fenix TK20R  tactical flashlight

In terms of performance, there were two main questions I wanted to answer about the Fenix TK20R. The first thing any flashlight needs to prove is its ability to light up the night, so I took the TK20R for a pre-dawn walk to a baseball field at my local park. On the way there, the 10-lumen low setting was perfect for seeing where I was going and letting drivers know I was in the crosswalk without impairing my night vision. At the field, the highest setting flooded the grass with an intense white light the length of the infield. The more reflective fence was clearly visible all the way to the tree line. The strobe setting works on the highest output, so I’d feel very good about using this as a weapon light.

Fenix also tout’s the TK20R’s water resistance, so I wanted to see how it would hold up to the unforgiving realities presented by mother nature. To do this, I turned on the light and submerged it in a Tupperware container for an hour. At the end of that time, I reached in and cycled through the power settings to test each function and the buttons’ seals before removing it. This wasn’t exactly a high-pressure test, but the TK20R is only rated as water-resistant to a depth of two meters. My results showed that it’s more than capable of handling rain and even shallow underwater operation. That’s good enough for field use.

What we like about the Fenix TK20R tactical flashlight

There’s a lot to like about this light, even in a segment with so many quality options. I honestly wouldn’t even consider putting any light in a bug-out bag or survival kit that doesn’t have a rechargeable battery. The last thing anyone needs in a crisis situation is a frantic search for AA batteries. It’s nice to have the backup batteries provided by Fenix, but I’d buy a small solar charger or battery bank and call it good.

Some flashlight manufacturers prioritize simplicity by programming one button to control every function. Tap once for power, twice for the low setting, twice then hold a third time for strobe––that kind of thing. It’s annoying at best and dangerous at worst. I appreciate that the TK20R has a separate button for power and output, with the strobe function activated by holding the function button so save-your-life mode is never more than one touch away.

Fenix takes an a-la-carte approach to accessories. This forces customers to select everything they want individually rather than buy a pre-assembled kit, but it also allows for personalization. Don’t pay for colored lens filters or a diffuser if you don’t need them. Want to add a pressure pad and reuse the existing light mount on your firearm? Go right ahead, everything is sold on its own.

What we don’t like about the Fenix TK20R tactical flashlight

The TK20R is so well-designed that it’s hard to find flaws. One gripe I have is that the power button isn’t tucked away as well as I’d like it to be. Small tabs on the outer ring provide a little bit of protection, but they’re so low that the light can be activated by allowing the button to contact a flat surface. I wish Fenix had built a taller, 360-degree ring around the base to prevent users from accidentally turning it on.

Size might be a concern for some, but that’s a matter of personal taste. The TK20R’s six-inch length is pretty standard for weapon lights intended for use on long guns, but it might be a bit much if you’re building a featherweight setup. At about five ounces, I’m not sure how much weight you could realistically save with a more compact light, but it’s possible. I think the TK20R is a usable size that fits the hand and rail well.

If the Fenix TK20R is a budget option, it’s only because some brands charge more for a similar product. The features on this light offer a huge amount of bang for the buck. Not only are the four output settings, one-touch strobe function, and rechargeable battery tactically sound, they’re well-executed. Double-walled aluminum and quality materials create a light that’s easy to use and reliable in the face of real-world challenges.

As a handheld tactical light, the TK20R gets my vote of confidence. I haven’t used its accessories so I can’t speak to its performance as a weapon light, but I have high expectations for the rail mount,  pressure pad, and lens filters. Since you can get the whole setup for less than some lights on their own, it’s probably worth giving Fenix a shot.

I’ve said it before and I’ll say it again: buying a piece of equipment is just the first step. If you don’t practice with your tactical light, you’re not much better off than if you hadn’t bought one at all. No matter what you choose, familiarize yourself with its functions until they become second nature. Use your light in different settings and take note of which output levels work best in each. Keep the battery topped off and use it regularly, even if you’re just walking the dog.

Q. How much does the Fenix TK20R cost?

A. Fenix charges $100 for the TK20R, and that’s the same price I found at multiple retailers. A comparable light from Surefire will run you more than twice that, so the TK20R is a seriously compelling bargain.

Q. How does Fenix compare to other tactical light manufacturers?

A. Shoppers looking for a tactical flashlight are spoiled for choice. Surefire, Streamlight, and Fenix are among the most popular brands, but they all make a range of lights for different uses, and making an apples-to-apples comparison usually comes down to personal preference.

Fenix tends to offer a lot of value with lights that perform on par with high-end manufacturers but cost significantly less. The TK20R offers more features and improved performance over a comparable Streamlight for about the same price. Surefire lights are the designer brand of the group, so expect to pay more for one of those.

Q. Is the TK20R waterproof?

A. The TK20R carries a waterproof rating of two meters. Rain and snow won’t be a problem, and it can handle being temporarily submerged. It’s not a dive light though, so don’t plan on raiding Alcatraz with it.

A. Absolutely. The TK20R is a solid tactical light on its own, but you can also upgrade your purchase with a pressure pad, rail mount system, and colored filters from Fenix. Check their compatibility chart to see which accessories are right for you.

Q. What’s the difference between the TK20R and an EDC-style flashlight?

A. EDC flashlights like the Streamlight ProTac I recently reviewed have a simple job: to perform better than the light on your cell phone. As long as they’re compact, relatively bright, and have some degree of water resistance, they can do the trick. Strobe features and rechargeable batteries are a bonus.

More advanced tactical lights like the TK20R are designed for combat. The TK20R is rechargeable, meaning you can keep it in the fight indefinitely if you have a small solar charger. Selectable output lets you read a map without destroying your night vision or blast a 1,000-lumen beam more than 300 meters into the night. With the available attachments, you can mount it to a weapon, control it with a pressure pad, and filter light in different colors. It’s also built to a more demanding standard and is better protected against water.