Review: the Gerber 06 FAST is the unofficial knife of Operation Enduring Freedom

You don’t need deployment goggles to appreciate this knife. 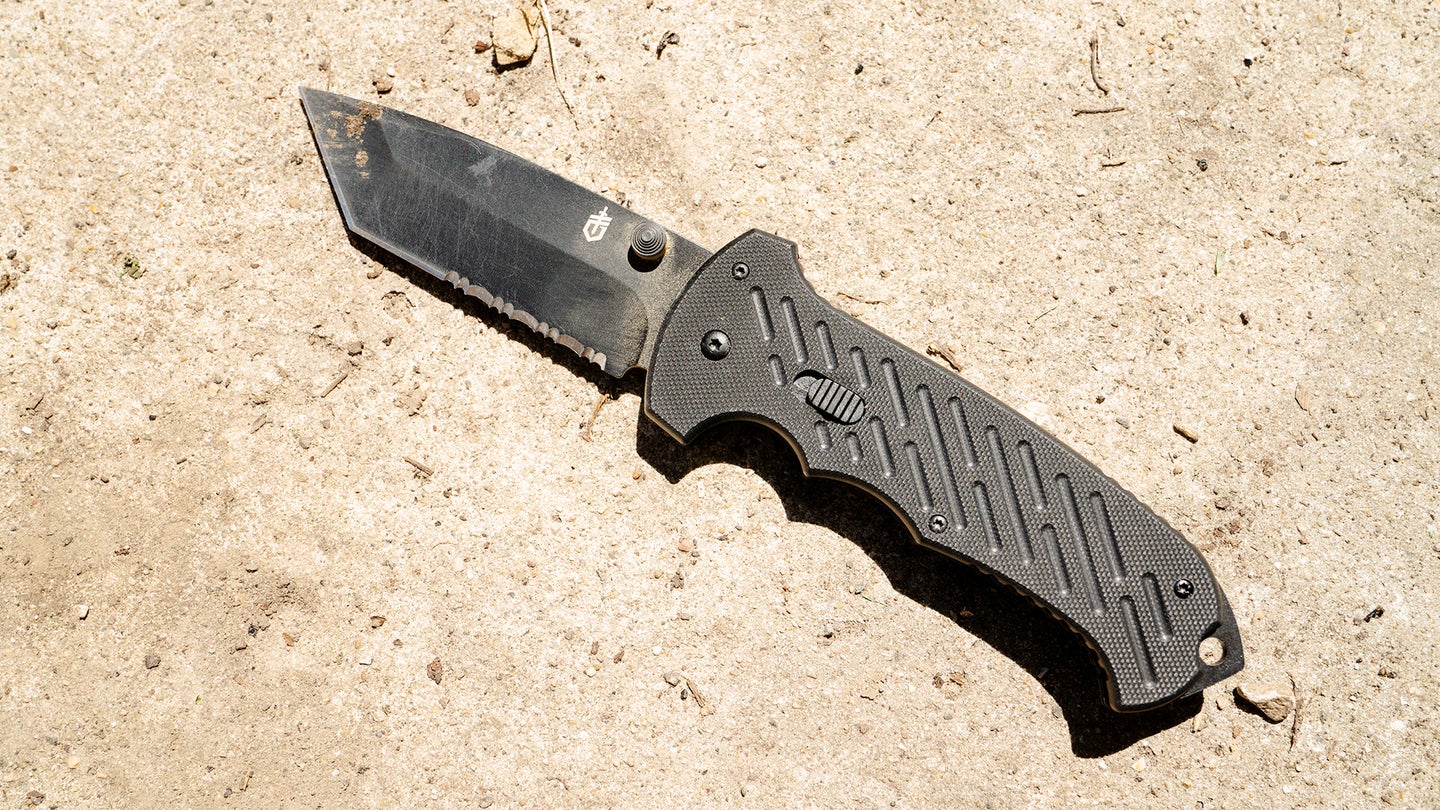 When I was on active duty, I noticed that supply Marines always had the best gear. So did their friends. One item I noticed fairly often was a tricked-out folding knife. The all-black Gerber 06 Auto looked mean as hell, with a partially serrated blade, tanto point, and push-button automatic opening mechanism. I had the opportunity to score one for myself, but (like an idiot) I took a multitool instead because I already had my deployment knife. The same multitool is affordable and can be found everywhere, whereas the $170 automatic Gerber is now much harder to obtain.

Fortunately for me — and active-duty personnel on a budget — there’s another option. The 06 also comes in a spring-assisted configuration that’s easier on the wallet and available to the public. The Gerber 06 FAST (which stands for “forward action spring technology”) is available for purchase for less than $70 if you catch the sales at the right time. It still fits the bill as a tactical knife that’s easy to carry, tough enough for field use, and quick to open with a single gloved hand.

Editor’s note: the Gerber 06 FAST also made Task & Purpose’s list of the best folding knives of the year.

At that price, there are several other options from brands like Ka-Bar, Benchmade, and Spyderco to consider. What makes the Gerber appealing is the battlefield functionality that led to its popularity among U.S. service members. The folding blade is just large enough to make it a viable hand-to-hand backup to your primary weapon and sidearm. Snappy deployment makes it easy to access with one hand, and the tanto point is strong enough to take a beating. There’s a tendency to view the past through rose-colored glasses, though, so I decided to revisit the old Gerber to see if it’s as good as I remember.

I know better than to judge a book by its cover, but if appearances were all that mattered the 06 FAST would score high marks. The blacked-out blade, handle, and pocket clip are bound to be a hit with anyone concerned about avoiding reflective gear. The only parts of the knife that aren’t matte black are the exposed steel edge, gray branding, and red dot on the safety switch.

The knife’s closed length of 4.8 inches is portable enough to take anywhere cammies are worn, but the 8.6-inch open length is large enough to serve as a utility tool or fighting knife when called upon. Combat functionality is increased by the integrated hilt, which keeps the hand from sliding forward when thrusting into a target. Since the handle is made from G10 fiberglass laminate, it should hold up to extreme weather and remain grippy in wet conditions. This material is popular among knife manufacturers and I’m a fan, as well. The base features a glass-breaker — a nice touch on a knife in this segment.

The 3.8-inch tanto blade is partially serrated and built from 7Cr17MoV steel. This Chinese-made alloy is considered mid-range steel that’s not too different from Japanese AUS8. It’s popular among survivalists and budget-minded buyers for its resilience and ease of sharpening. Though not quite up to snuff with the S30V stainless steel used in the 06 Auto, 7Cr17MoV is certainly capable of serving as a working blade. Edge retention isn’t ideal but corrosion resistance is better than average.

How we tested the Gerber 06 FAST

I gave the Gerber 06 FAST the usual rundown of cutting rope, dropping it onto concrete, and daily carry. I also used it for mundane tasks like cutting zip ties and opening packages. This style of knife is definitely overkill for EDC duty, but that’s pretty apparent from its size.

Cutting rope and wood was no problem. In fact, the 06 FAST stuck about a quarter-inch deeper into my test plank than blades with other types of points. The partially serrated edge made things a little tricky at times; every now and then I would have preferred an edge that was either all serrated or all plain. Around the house, that’s a luxury I can afford. In a combat zone, I suppose it’s good to have one knife that’s more versatile.

The biggest surprise came when I tested the 06’s durability against our old enemy, the sandbag. Stabbing into the sandbag was no problem (as expected), but the sand took a toll on the blade’s forward-facing edge. After about a dozen thrusts and some digging into packed earth, the blade’s leading edge was noticeably dull. Upon closer examination under a light, I could see the edge folding and rounding in places. Sand that worked its way into the knife’s handle didn’t impede the lock or opening mechanism, but seeing that amount of edge wear so quickly was unfortunate.

The Gerber 06 FAST has been a hit with the military crowd for years. The devil’s in the details, and this knife was clearly built for use on the battlefield.

The opening mechanism could be better, but the safety is a nice touch. It can be activated to lock the blade in either the open or closed position. Why would you want to prevent the blade from opening, you ask? Spring-assisted knives can be touchy and are much more likely to accidentally deploy than a traditional folding blade. Having a physical safety is a nice level of security. Besides, it has a red dot like the safety on a firearm, which makes it more tactical, right?

In terms of size, the 06 hits a sweet spot. Most EDC-style knives aren’t cut out for combat because they’re simply too small. On the other hand, fixed-blade knives and even some folders are bulkier than many people want to deal with. This Gerber is about as small a blade as I’d want to use in a kinetic environment, and as large as I’d want to carry in my pocket. It’s also thin enough to mount on a plate carrier without getting in the way.

Tanto points seem to be one of those love-it-or-hate-it features, but I’m glad we at least have the option. It’s true that in most situations a more traditional blade shape will perform better, but there’s a reason samurais used tanto points on their fighting knives: they were great at puncturing heavy armor. The textile material found in the modern body armor used by militaries and paramilitary groups around the world isn’t that different, so the tanto point is absolutely relevant today.

As good as this knife is, it isn’t perfect. There are a few tweaks I’d like Gerber to make, even if it results in a higher price.

Most of us prefer to carry our folding knives tip-up in our front right pocket — I get that. But that’s not everybody every time, and the pocket clip on the 06 FAST can’t be repositioned. While it can be removed, it would be nice to have the option to mount it in different ways. Everyone likes to set up their gear differently, and being boxed into carrying your knife a certain way is a limitation I’d rather not have.

I don’t have a problem with 7Cr17MoV steel in general, but it’s not what I would have chosen for this particular knife. The 06 FAST is marketed as a combat knife, and that’s not an environment where I want to rely on cost-cutting materials (issued gear from the lowest bidder is bad enough). To add insult to injury, the automatic version of the 06 gets superior S30V steel. Automatic and assisted opening mechanisms are enough to differentiate the two knives, so I wish Gerber had used the same steel for both blades.

The Gerber 06 FAST is a tool, first and foremost. It’s probably not your next EDC unless you’re wearing cammies or just prefer a larger knife, and it’s not exactly artisanal build quality. It’s built to a price point with the goal of retaining the tactical qualities that made the 06 a classic.

So, would I carry an 06 FAST during field exercises or deployments? There are a lot of times when that would make sense; especially at a sale price of around $70. I wouldn’t pay MSRP for this knife, though, and I’d upgrade to the 06 Auto if I could. The added convenience of the automatic variant is nice and the improved steel is absolutely worth the extra money. That being said, this isn’t a bad knife. There’s a lot to like about the 06 FAST and there’s a reason it sells so well––even if it’s not the world-beater I remember.

Choosing a knife for duty is no different than any other kind of knife; it’s all about priorities. The Gerber 06 FAST is built for thrusting rather than slicing, easy to sharpen, and doesn’t have to break the bank. The glass-breaker and safety switch are likely to be strong selling points. If you want a forceful opening action, customizable pocket clip placement, and long edge life, I’d point you elsewhere.

Spring-assisted knives are an interesting segment. You could argue that the whole point is to get as close to automatic opening as possible without legally qualifying for the extra restrictions placed on automatic knives. The surprisingly affordable Kershaw Clash is one example of that philosophy. It seems that Gerber wasn’t interested in pushing boundaries with the 06 FAST, because its spring mechanism is fairly light. It’s still much easier than a traditional folding knife, but I was expecting a little more snap and pop from this one.

FAQs about the Gerber 06 FAST

Q. How much does the Gerber 06 Fast cost?

A. Gerber lists an MSRP of $83 for the spring-assisted 06 Fast, but it can be yours for $60-70 from multiple retailers at the time of writing.

Q. Do Gerber knives come with a lifetime warranty?

A. Yes. Read up on Gerber’s lifetime warranty or submit a request on their website.

Q. What happened to the push-button 06 FAST?

A. Gerber still produces automatic knives for use in the military and law enforcement. They’re significantly more expensive than assisted knives and might involve jumping through a few hoops. The assisted version of the 06 retains much of the automatic’s functionality and is easier to get your hands on.

A. I don’t do legal advice. Check your local laws to see what kinds of knives are allowed where you live. Keep in mind that the 06 FAST is not a switchblade; it features assisted opening, which is an important distinction.

Q. What is a tanto blade built for?

A. Tanto blades were originally used by Japanese warriors who needed a close-quarters backup to the katana. Because heavy armor was widely used at the time, knives used in combat needed to be particularly strong and good at piercing, rather than slicing.

Tanto blades aren’t as versatile as other shapes and might not be ideal for an EDC, but they’re well-suited to tactical use and take abuse relatively well.