The best gifts for someone who ‘almost joined the military, but…’

"I wanted to enlist, but I totally would've punched out a drill instructor." 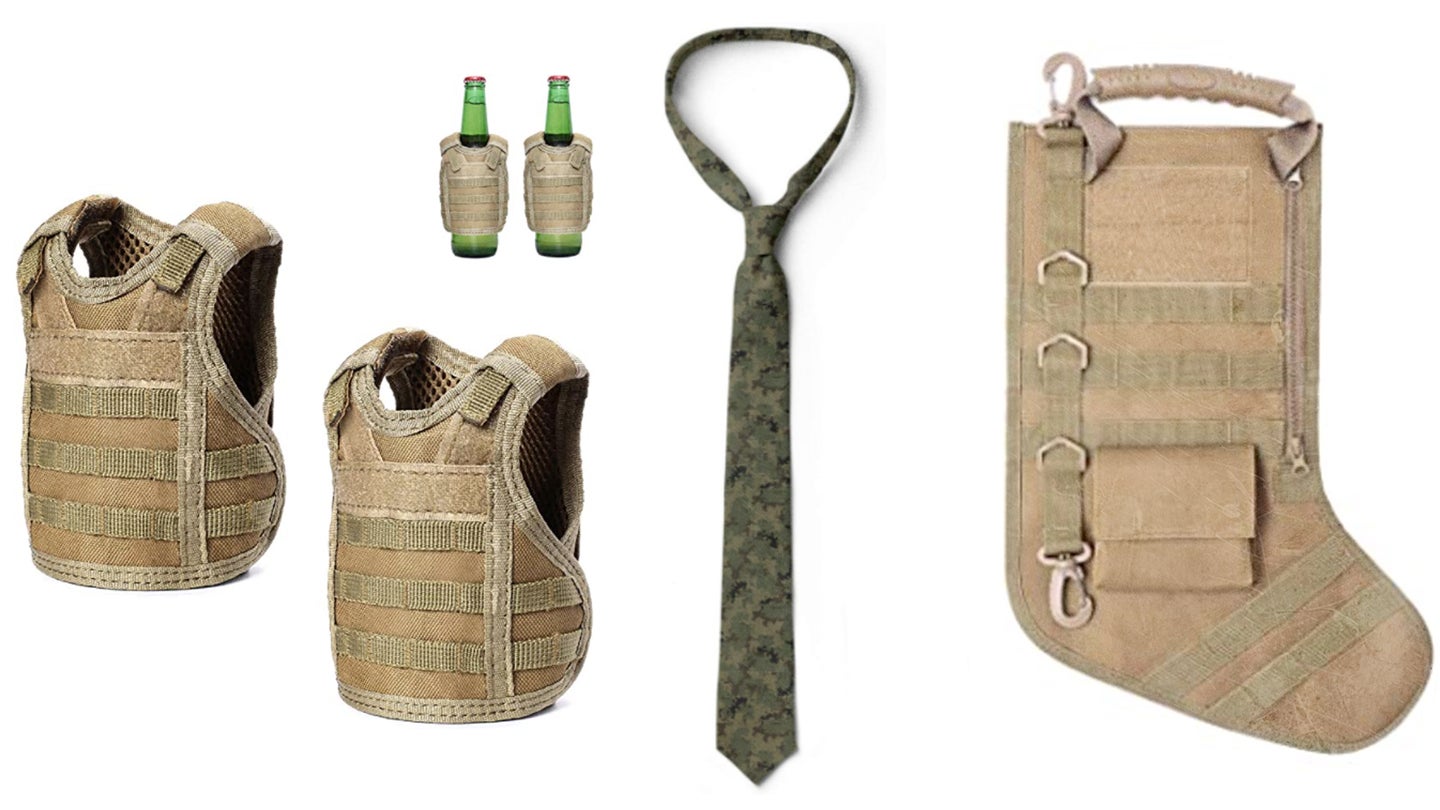 It’s the holiday season, and while most people will be wrapping up their seasonal shopping, there’s always that one holdout, that one family member or friend who’s impossible to shop for.

And then there’s that one guy that nobody ever wants to buy presents for. It’s the dude — it is almost always a dude — who rolls up for a 1-mile “hike” in a camo-painted lifted pickup truck, and hops out wearing ballistic sunglasses, a tan ballcap, and a shemagh. He’s got a scraggly operator beard to go with his combat boots, not to mention his cargo pants stuffed with multiple knives, MRE toilet paper, and chem lights. He looks like he’s about to invade Baghdad. Or, more likely, he’s dressed the way he thinks people who invaded Baghdad dress.

Despite his outward presentation, he never served. Now, nobody cares — not about the lack of service of this caricature, or his real-life counterpart — nobody except him. And he cares a lot.

This is the guy who uses “we” to talk about very specific military operations the way that baseball fans talk about their team winning the World Series, except nobody thinks they’re suggesting they were on the field when they do it.

He’s the kind of guy who watches this “Almost Veterans Day” skit and sees a self-portrait, not parody:

Yes, it is apparent to all that he really wanted to join the military, but [Insert reason, which may or may not be reasonable, but goes out the window when he feigns outrage over a change in Army, Navy, Marine Corps or Air Force policy and decries it as a blight on a beloved branch he never served in.]

It is understandably difficult to shop for someone like that. So, we here at Task & Purpose decided to put together a handy list. Enjoy.

The world’s most tactical mug

The in-your-face military grade Battle Mug is perfect for the guy who orders coffee like he’s calling in a fire mission. The mugs come in a variety of sizes and prices, from the slightly affordable Polymer version, to the much more expensive Classic and Dog Tag Edition mugs. However, they all feature the same signature concept: slapping a picatinny rail system on a coffee cup so you can make it “modular.”

The loudest tie for the quiet professional

It wouldn’t be the holidays if someone wasn’t given a tie they didn’t want, though in the case of the guy who “almost enlisted,” this might help them loudly suggest to the outside world that they did actually serve. This ‘so moto it makes my eyes bleed’ tie is clearly modelled off of the Marine Corps woodland digital camo pattern, so much so that it should probably be renamed: Semper Tie.

For those who dig into a bowl of ice cream with the mission-focused intensity of a soldier establishing a defensive fighting position, there’s the KA-BAR Destroyer Ice Cream Scooper. Why you’d need a tactical ice cream scooper, I have no idea.

For veterans of the War on Christmas — and nothing else — here’s a bunch of tactical Christmas stockings in black, olive drag and tan. Why is it tactical, you ask? Just look at all that MOLLE! And hey, there’s finally something you can do with that KA-BAR ice cream scooper: Drop it in the stocking.

All jokes aside, this one might actually make a decent gag gift for any loved ones serving overseas during the holidays. Though, I’m sure they’d prefer you just send them a hard drive of movies, or smuggle them some booze in a care package. Yeah, actually you should do that instead.

Tactical beer koozie because protecting your beer is mission essential

On the topic of booze, here’s a flak jacket for your beer — or a very very small dog. And hey, more MOLLE! The “tactical” beer vests are waterproof and made of nylon, and should fit most beer bottles and cans. If there’s one thing that screams “I love military(ish) gear, because I have no idea what it’s like to wear it all the time!” it’s modeling products off of body armor. Which leads us to…

Honestly, just don’t. Breezing past the question of why you’d ever need to make a baby carrier tactical, it’s hard to imagine something like this being comfortable for either the wearer, or the child being carried in it. But, this list isn’t for things anyone needs, it’s for things the “guy who wants everyone to think he served” wants. And he’s probably the only one who wants this. That kid in the photo sure doesn’t.

If there’s one surefire way to help our “almost veteran” understand what they missed out on, and why they might want to rethink their obsession, it’s the pure unadulterated agony that comes from wiping one’s ass with barely even half-ply toilet paper. Fortunately, you can help them understand by gifting a 50-pack of the toilet paper typically found in military Meals-Ready-to-Eat. They’re small enough to make a good stocking stuffer, to boot.