This Mancrate Got Me Drunk Before Noon On A Workday

If you’re a drinker, then you’re intimately familiar with hangovers, but if you’re a pro, then you also know the... 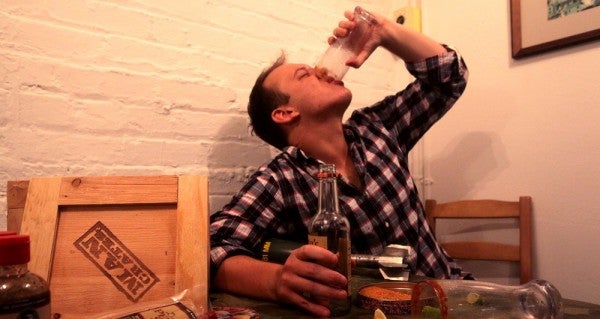 If you’re a drinker, then you’re intimately familiar with hangovers, but if you’re a pro, then you also know the cure: hair of the dog.

No drink does it better than the Bloody Mary. A tomato and vodka-based cocktail, the Bloody Mary has gone through a bit of a renaissance in recent years. What used to be a sad and underwhelming mixed drink served in a plastic cup at the local dive bar and made with V8 and vodka has been transformed. These days, the Bloody Mary is an artisanal cocktail that tastes good, kills your hangover, and puts some food in your empty stomach.

To that end, the Bloody Mary Crate from Mancrates has everything you need to make a delicious morning cocktail. Mancrates is an online catalog geared toward guys who love the idea of prying open a wooden box with nothing more than a crowbar, some muscle, and a little leverage.

Related: The Perfect ‘Shot’ Glass For The Modern Warfighter »

Delivered in a wooden crate with a small crowbar, this gift box will put hair on your chest in addition to giving you a nice buzz, though you’ll need to supply the booze. It’s easy to open, but if you need instructions on how to use a crowbar, they have some helpful advice on their site.

The Bloody Mary Crate from Mancrates comes with three mixes, two pilsner glasses, seasoning for the rim, a six-pack of clamato tomato juice, and pepperoni straws.

Inside the box, which comes in at $74.99, you’ll find a six-pack of clamato tomato juice; a host of ingredients from Demitri’s: pepperoni straws; horseradish, chili and peppers and classic seasoning; bacon rimshot, which is a fancy way of saying chili powder, salt, and bacon bits for the rim; and two plastic pilsner glasses.

For my Bloody Mary, I used Tito’s vodka and added a few kalamata olives. Personally, I prefer the classic seasoning, which adds a nice peppery aftertaste without being too spicey. The chilis and peppers mix is on the hotter side, so you’ll want to add a little to start, then adjust to fit your palate. The horseradish mix was saltier, but tastes great with the clamato, which is made with clam juice and already salty. One can of clamato, a double shot of vodka, and a quarter shot of seasoning poured over ice fills one of these pilsner glasses, with room left over for a slice of lime and a pepperoni straw.

After spending my weekend at the bottom of a Bloody Mary glass, or several, I realized a few things. First, I prefer Demitri’s classic seasoning over the other two, which override your tastebuds if you don’t mix it perfectly. Second, while clamato juice makes a good base, it’s a bit on the salty side and gives your Bloody Mary a briney flavor. If you’re not a fan of seafood, I suggest ditching the clamato for some cheap and bland Bloody Mary mix, which you can then spice up with one of the three seasoning sauces from the crate. Finally, it’s never a bad idea to fry up some bacon to toss in as a garnish, especially if you’re like me, and get a little uneasy slurping your drink through a meat straw, but still want food in your cocktail.

Caption: The Bloody Mary Crate from Mancrates comes with bacon rimshot from Demitri’s, which is applied to the rim of one of the crate’s two plastic pilsner glasses.

If nothing else, it’s worth buying the crate for the classic mix and the rimshot, which are excellent together and make every sip taste like a Southern-style breakfast — think hashbrowns, bacon, and Heinz 57. In any case, all three mixes and the crate’s fixings do their job of getting you drunk before noon really well. So, if you’re on the hunt for a Bloody Mary starter kit for the weekend, or Friday morning, look no further.