Review: Smith’s DRET knife sharpener is a diamond for smoothing the rough

Who knew that sharpening a knife could be so easy? 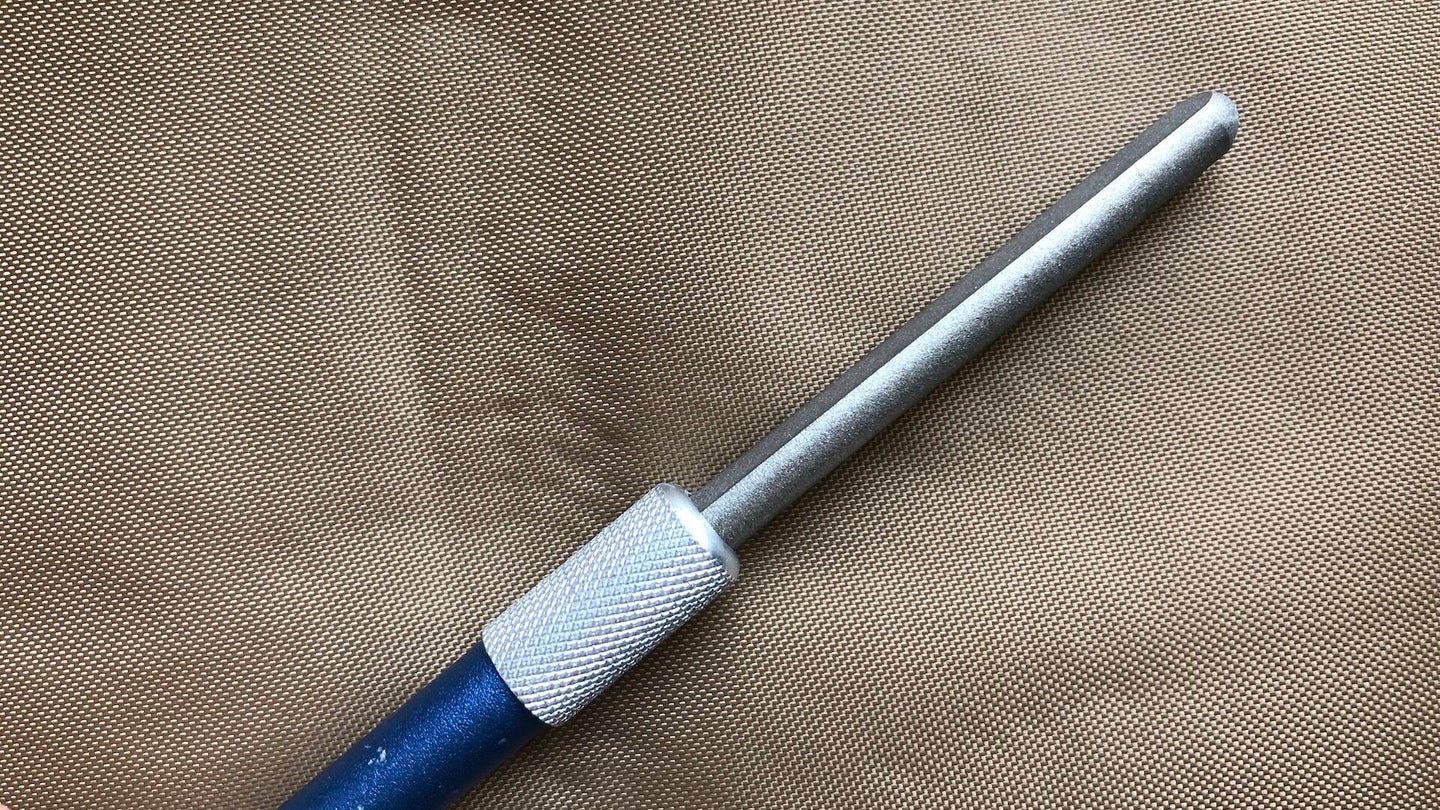 For many, knife ownership serves as a rite of passage, an entry into adulthood. Of course, just like your first car, your first blade comes with its own share of responsibilities. Most first knives are made with lower-quality steel that resists corrosion well, but fails to maintain an edge for very long. When this happens, we all begin to wonder what our next steps should be. If you’re like I was, then the Smith’s DRET Diamond Retractable Sharpener can’t come into your life soon enough.

For years, I collected cheap pocket knives and multitools with dull blades in a dresser drawer. Eventually, I learned about whetstones but found them too inconvenient, mostly because 15-year-old kids rarely seem to have patience for learning new, “uncool” skills. Eventually, I ditched many of those cheap blades in favor of better ones, but my interest in knife sharpening only saw a minimal increase. The Smith’s DRET Diamond Retractable Sharpener changed all of that.

Today, my knives always get the diamond treatment after any kind of hard use, regaining a sharp edge with a mere handful of strokes. That alone should be reason enough to snag one of your own. Keep reading, and you’ll find a few other reasons for picking up a DRET of your own.

The Smith’s DRET is a rather unassuming little tool, coming in a humble carded blister pack with a Smith’s logo and the typical marketing print plastered on the package’s front and back. Of course, opening the packaging was pretty straightforward, and the knife sharpener I found myself holding looked much like a ballpoint pen with a few noteworthy exceptions.

The DRET weighs a good bit more than your average pen, but it tips the scales at a mere 1.6 ounces, plenty lightweight to slip into a pack or a pocket. While slightly thicker than a typical ballpoint, the entire sharpener is noticeably shorter. The aluminum body uses mild texturing to provide a good grip, and the removable pocket clip easily secures the DRET inside a shirt pocket or similar location. At the opposite end of the sharpener is a knurled aluminum retention ring which allows you to secure the sharpening rod into place at your desired length.

The rod is double-sided and easily removable with a simple loosening of the retention ring. One end is mostly round with a flat surface on one side for sharpening your flat edge of choice and a groove on the underside specifically designed for sharpening fish hooks and similar objects. The flip side of the rod is tapered nicely, providing the perfect surface for putting some bite back into tired serrated blades. It sticks out roughly half an inch from the end of the aluminum housing but in no way causes any problems from a storage or durability standpoint. The DRET’s sharpening rod consists of a steel core coated with multiple, medium-grit layers of monocrystalline diamonds designed to put a good, quick edge on virtually any type of blade in about the time it takes to sing the first verse of The Star Spangled Banner. Maybe faster.

How we tested the Smith’s DRET Diamond Retractable Sharpener

When I first received my Smith’s DRET, I needed a test subject or two to determine its effectiveness. Thankfully, I had a good collection of dulled knife blades just begging for some TLC. I picked up my well-loved Gerber Paraframe and started slipping the edge along the DRET’s sharpening rod. Within just a few strokes, my Gerber transformed from a less-than-practical collection of steel parts to a very usable blade. Color me impressed.

Over the past few years, the Smith’s DRET in my possession has sharpened and resharpened numerous blades, such as my Buck 110 and my (very blunted) Old Timer Mighty Mite. Each time, it has performed well, leaving me smiling as yet another knife becomes serviceable again. Within the first few sharpening sessions, the rough texture of the sharpening surface wore smooth, but even after years of use, the DRET continues to do its job and do it well.

What we like about the Smith’s DRET Diamond Retractable Sharpener

More than anything else, the DRET performs very well. After only a handful of strokes with one of my worst blades, I was blown away by how quickly it turned a dull blade into a sharp instrument of cutting precision. Even after the initial rough finish on the knife sharpening surface wore smooth, it continues to do its job very well — time after time, year after year. This thing just flat out works.

The Smith’s DRET boasts plenty of other features worthy of praise. At around $10, the DRET is quite a bargain, especially if you use your knives often. The vast majority of whetstones and knife sharpeners start out around $15, but often reside in the $30 to $50 range. Those that cost less tend to be bulkier and less versatile than the DRET, turning the Diamond Retractable Sharpener into a solid value purchase.

This Smith’s sharpener is easy to use for all but the greenest of greenhorns. The instructions on the packaging I received were clear and straightforward, so getting started shouldn’t present an issue. The sharpening rod is very easy to access, and securing it in place is about as easy as slicing your finger with your brand new Spyderco.

The DRET’s design also gives it the advantages of versatility, portability, and convenience. The sharpening rod can accommodate virtually any blade type without breaking a sweat. The unit’s size and weight make it incredibly portable, making it an excellent candidate for carrying in your pocket, EDC bag, or bug out bag. Of course, with such a low price tag, you could easily buy one for each carry option. After all, you never know when you’ll need to sharpen a blade.

Of course, something I look for in virtually every piece of gear I buy is durability. Thanks to its all-metal construction, the Diamond Retractable Sharpener was built to last. The diamond-coated sharpening rod can also take a licking and keep on ticking. Due to the tough, hard nature of diamond, I imagine this thing could outlast me. It may not be the fanciest heirloom I could pass on, but it’ll certainly be one of the most practical.

They say to leave the best for last, and in my book, the DRET’s best feature may just be its lack of need for lubrication. Sharpening knives often require some kind of lubricant, whether that be water or honing oil. Whetstones have a tendency to collect metal shavings in their pores, thus diminishing their effectiveness (at least for their original grit) and can scratch your blade. The advantage with diamond sharpeners is that lubrication is usually unnecessary, and such is the case with the Diamond Retractable Sharpener. This means all you need to sharpen an edge is the DRET and the blade in question.

As much as I love my Smith’s DRET Diamond Retractable Sharpener, I do realize that even it has its limits. Due to its medium grit, this sharpener specializes in making dull knives sharp, but if you want to create an edge from nothing or turn a sharpened edge into a razor, you’ll need a dedicated whetstone (or three).

The DRET’s sharpening surface is quite small, making it better suited for smaller, single-handed blades. Any blade that requires two hands to sharpen will exclude the Diamond Retractable Sharpener from its list of friends. This means the DRET won’t be inviting your Ka-Bar or that samurai sword mounted over your fireplace to any parties either.

While this sharpener’s small stature is incredibly convenient for a variety of reasons, it can be somewhat difficult for some people to hone an edge well. Traditional whetstones and other sharpeners work best when placed on a flat, firm surface, but the DRET was clearly designed as a handheld tool. While this certainly increases its convenience factor, maintaining your blade angle during a sharpening session takes a little bit of concentration.

Due to the sharpening rod’s shape, this Smith’s sharpener may not play well with scissors, depending on the opening angle of the pair in question. That said, my DRET worked nicely enough on my Gerber Dime Travel’s mini shears. I enhanced the factory’s “edge” in two to four strokes despite a narrow opening between the edges.

While the DRET is very easy to use for anyone with some knife sharpening experience, it may not be the best tool for someone who’s never done the job before. Much of Smith’s whetstone collection includes a blade angle guide designed to help newbies from blunting or destroying the integrity of their knife’s edge while sharpening. Unfortunately, the DRET lacks such a guide, which means users must eyeball their blade angle while sharpening in order to do the job well. While some people can pick this up on the fly, others will not, and this means potentially ruining their blade’s edge in the process. (If you do ruin your edge, please DO NOT try to fix things with your buddy’s grinder. You’ll only make things worse. Instead, learn how to sharpen your knife properly, and invest in a good whetstone kit and the education to go with it.)

Lastly, I’m not a huge fan of the removable nature of the pocket clip. While it has a good, solid purchase on the aluminum body of the sharpener, the clip could pop off. While admittedly this is unlikely to happen, I’d prefer not to mess with the possibility. Sure, a replacement is only $10, but I hate having to spend money. I also hate having to wait for new gear.

When all is said and done, the Smith’s DRET is an excellent investment for the average knife owner. Despite the longer list of cons in this review, this sharpener’s performance and convenience easily outweigh these drawbacks. The DRET’s size and design, coupled with its impressive performance, make it a standout blade and hook sharpener. Throw in its toughness, durability, and ease of use, along with its affordability and convenience, and you’ll have trouble choosing to pass on this sharpener.

The Smith’s Diamond Retractable Sharpener may not turn a screwdriver into a razor, but for active soldiers, hunters, campers, anglers, and others, it outshines any other sharpener on the market. If you only plan to buy one knife sharpener, you’ll be hard pressed to not buy the Smith’s DRET. Stick one in your pack, keep one in your pocket, and throw one in your glove compartment. Honestly, you can’t go wrong.

Q. How much does the Smith’s DRET cost?

A. The Smith’s Diamond Retractable Sharpener usually goes for around $10 a pop. That said, finding one for less than that is far from impossible.

Q. Do you push or pull when sharpening a knife?

Q. What is the proper angle for sharpening a knife?

A. Generally speaking, a proper sharpening angle is somewhere in the neighborhood of 15 to 25 degrees, depending on the blade’s thickness and intended purpose.