We may earn revenue from the products available on this page and participate in affiliate programs.   Ah, rubber-band fights:... 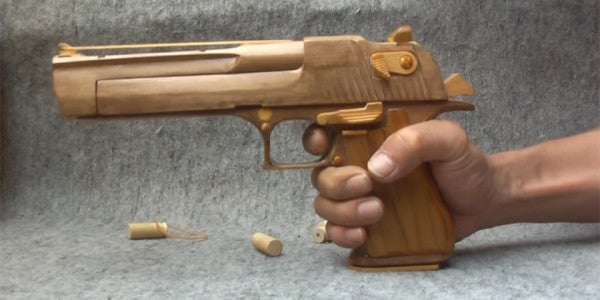 Ah, rubber-band fights: a schoolkid’s rite of passage. Let us fondly recall those heady days of desperately trying to nail our friends in the eyeballs — totally an accident, honest! — with a Mark 1 Mod 0 finger pistol, or the advanced delivery technology provided by a No. 2 pencil.

For a select few, the rubber-band war continues well into adulthood, and this has led to quite an arms race. From Gatling-style rotary blasters to stretch-powered shotguns, these are the five most badass rubber-band cannons the internet has to offer.

Perfected after 100 revisions and Mythbuster-approved, this is actually a fun thing for the kids: a kit gun that you lovingly piece together yourself before using its crazy power to break shit. The reasonably priced, Kansas City-crafted monster fires in three modes — single-shot, rapid-fire, and “shotgun blast” — because sometimes you just want to bury the housecat in a stretchy world of hurt.

You know what would be metal as hell? An actual metal rubber-band shooter. Looking like the type of firearm your local steampunk club might keep on hand, this “CQB” pistol has the heft and features of a real handgun — and frankly, a more menacing look. It swings like a stapler to reload, features a trigger safety, and toggles between semi- and full-automatic fire. Plus, if you just want to take your rubber-band fight to Mad Max levels, you can definitely win by pistol-whipping someone.

3. The freaking mother of all miniguns.

Outnumbered? Not for long, thanks to OGG Craft’s P503 Gatling gun — one of the Japanese maker’s 61 rubber-band shooter designs. It runs on a screw-gun motor and is legitimately terrifying… not just to potential targets, but to your rubber-band budgeting. Just be sure all the bad guys are down or fleeing in terror before you stop to reload, because you’re going to be there for a while.

Remember that line about hitting your friend in the eye? This kit gun will probably let you do that, or at least let you geek out over latent fantasies of being a Navy SEAL sniper. It’s an actual bolt-action rubber-band sniper rifle, complete with a bipod, a dummy scope, and a magazine (it doesn’t feed the action, but it’s a convenient place to stash your stretchy ammo). Every time you cycle the bolt, another rubber band is, uh, “chambered.” So, have at it — just don’t ask us how to figure out windage on a rubber-band shooter. And if it’s not your thing, manufacturer RB Guns also makes M9, lever-action Winchester, Colt Army, and MP40 band guns. Every thing a rubbery regiment could need!

Shoot at the king, you best not miss. And the Desert Eagle .50 is an undisputed king of hand cannons, so it deserves one hell of an homage. What it lacks in firepower, relative to some of its peers on this list, this Desert Eagle makes up in style. Wood finish, with a magazine, and a slide that cycles as you pull the trigger — it even has individual wooden “shells” that eject as you fire.

Does that add anything to the effectiveness of the weapon? What “effectiveness”? It’s a rubber-band gun. It does look really cool though. Want to buy one? So do thousands of YouTube commenters. But the anonymous builder of this behemoth is hobbying, not selling. So you’ll have to settle for salivating over it… and his MAC 10, and his top-break S&W; revolver, and his his Colt Walker. Can we be this guy’s friend?