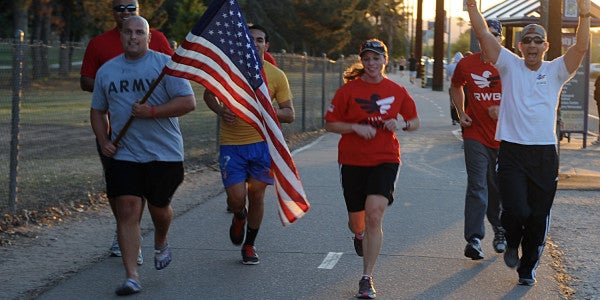 In December, the disaster recovery charity racing team Race2Rebuild partnered with nonprofit Team Red, White, & Blue in New York City for a joint-holiday social. We went ice skating and then over to a bar for some snacks and a pint. Race2Rebuild offered a free raffle just for showing up offering prizes like a t-shirt or socks. That was pretty cool.

What wasn’t cool was the grand prize: entry into an Olympic-length triathlon in Connecticut this month put on by Challenge Family, a long-distance triathlon series. For those unfamiliar, that’s nearly a one-mile swim, 25 miles on a very hilly bike course, and then a 10-kilometer run on more hills.

This is where my friends get terrible. They pulled my name out of the bin.

The athletic director for Team RWB, when she stopped laughing at my terrified expression, pointed at me and said, “You are doing this. No excuses.”

Related: How Long Does It Actually Take To Get Out Of Shape? »

So for the last six months, I’ve been training for a triathlon I “won.” Swim, bike, run, strength training — every day a little something. And as awful as these friends of mine are, I still have to admit that even though I still dislike running, hate swimming, and despise biking, this experience has shown me how exercise can benefit all of us veterans. Here are five of those benefits.

Without mandatory physical activity after the military, the pounds just kind of sneak up on you. The real problem is you know what it feels like to be in shape, and you start to miss that. It’s not body shaming, it’s being health conscious, and you know it. Plus, you now live in a fourth floor, walk-up apartment. That lady you just brought home isn’t going to be wooed by your wheezing at the top of the stairs after you only convinced her to follow you home with stories of all those babies you saved back in your war days by running three miles in under 19 minutes. Liar.

The military was also very good at cloaking “bonus” PT. You are no longer running around in the woods all day doing stupid “I’m up, he sees me, I’m down” drills as part of your job. Additionally, units typically never had a kitchen stocked with Ted from accounting’s leftover birthday cake. The civilian world has a million opportunities for us to start eating and stop moving (I’m looking at you, Netflix), while the military world was the opposite. The laws of physics apply: Without outside force, an object at rest stays at rest, an object in motion stays in motion. Being lazy in one aspect of your life can easily leak over into other aspects, like searching for a job or school, or even washing the dishes. Meanwhile, just getting up and working out for a little bit every day can get you into a routine that even helps ward off some of the transition depression we all go through. It’s science!

Exercising on your time in your own way.

The first day you realize that you don’t have to get to PT at some stupid hour (really, 10 minutes before the 10 minutes before stupid hour), feels like Christmakwanzakuh came early. You don’t have to do push-ups in a field to a cadence before the sun comes up. You can hit the gym at lunch or after work if you like. You can take a boxing class. If you’re an awful human who likes climbing up ropes and jumping on boxes, you can give CrossFit a try. No one is telling you what to do, so it’s a chance to try something fun.

I was hit by an IED in 2005. I needed some pretty crazy surgery, and the doctors said I wouldn’t ride a bike again because of my balance. I thought that would save me from the weird cult of triathletes forever. But one firefighter on Team RWB overheard me trying to bail on the race. Next thing I knew, the New York Fire Department had donated a folding (NYC apartment-friendly) trike — a bike with three wheels for extra balance. Other Team RWB members, mostly veterans, showed up for the donation celebration at a Bronx firehouse. Everyone had cake, and friendships were made. Since I don’t intend to make triathlons a habit, those friends connected me with other groups, so I could offer use of the trike to others troubled by the lingering effects of traumatic brain injury. Then I made a business connection because those people also have day jobs, including a random runner I met who was looking for a consultant in my field, and I landed a new contract. Networking as a transitioning vet, wounded or not, is important, and I haven’t found a common ground quite like physical fitness for expanding one’s network into serendipitous sectors.

Making new friends who appreciate the same things as you.

We miss our military friends. You eat, sleep, and poop right next to someone for a length of time and you are going to bond with them. When you get out, you miss that bond. Fitness activities can help replace it. Participating in a local running club or a singles dodgeball league (yes, this exists) lets you share in the miseries and the victories, and purpose, again. Your team is terrible? Everyone goes out afterward and commiserates. Your team is awesome? Everyone goes out afterward and celebrates. Unified purpose builds bonds.

So yeah, I hang out with terrible people who enter me in races and forced me to do things that make my bad shoulder hurt and my bad ankle pop. But every week, usually more, at least one of those terrible people check in on my training and offer solutions to my Army-induced maladies, or offer to pick up the race as a relay when my doctor has apprehensions. Plus I made connections in my network. And most importantly, those things that still send me to therapy once a week seem more under control as I keep myself moving.

So get up and go get yourself some terrible friends like mine.