A former Army drill sergeant leader has a belly button again — and a new life — thanks to a... 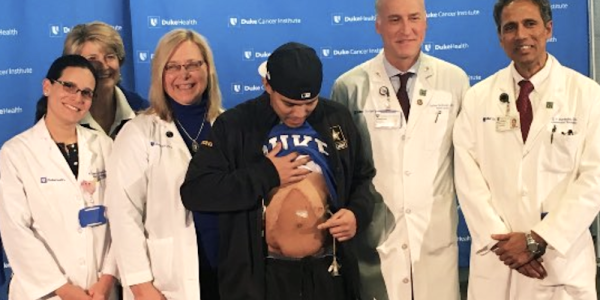 A former Army drill sergeant leader has a belly button again — and a new life — thanks to a teenage organ donor and a team of doctors at Duke University Hospital.

Johnathan Nauta, 37, of Fayetteville, received a simultaneous abdominal wall and bowel transplant on Oct. 12 at Duke that lasted 14 hours and involved a team of 25 doctors, nurses and staff. It was the first abdominal wall transplant in the Carolinas.

The organ donor was Marcus Scales, 13, a middle school student from Rockingham County who died on Oct. 10.

Nauta was an Army drill sergeant leader stationed at Fort Jackson, S.C., in 2014 when he felt dehydrated and started throwing up.

“I tried to be hardcore, but I couldn’t keep anything down, so I checked myself into the hospital,” Nauta said Thursday at a news conference at Duke.

Nauta’s appendix had burst when he was 6 years old and the resulting scar tissue caused intestinal blockages when he was 11 and then again in 2010 and 2014. His doctors before Duke recommended hospice because they didn’t think he would survive.

He said he remembers being in the operating room in South Carolina on Sept. 24, 2014 and waking up 10 days later at Duke hospital to Dr. Debra Sudan, chief of Duke University School of Medicine’s Division of Abdominal Transplant Surgery.

“He came to us desperately ill,” Sudan said.

They couldn’t restore his ability to eat so decided an intestinal transplant was the way to go, but there was too much scarring to do it without an abdominal transplant, too. Nauta lived with tubes and waste bags for four years, until this last surgery. He also almost died again in 2017 from an infection.

Dr. Detlev Erdmann, professor of surgery at Duke’s Division of Plastic, Maxillofacial, and Oral Surgery, said the abdominal wall is “the entire tummy, so to speak.” It’s what protects your organs, he said, and is connected to muscles, skin and blood supply.

Kadiyala Ravindra, program director of Duke’s Abdominal Transplant Surgical Fellowship, said the abdominal wall is like the shell for the body, and Nauta’s shell was damaged.

The donor and the surgery

Several things had to come together to make the transplants happen, from the surgical teams to the donations.

Ravindra said it was truly teamwork, with five different medical teams, and “all possible because of Marcus.”

Marcus Scales’ parents donated eight of his organs, which have since saved the lives of six people. The organ donations were all arranged through Carolina Donor Services, except the abdominal wall because that is a rare surgery. The Scales family approved that one separately.

“Marcus was a very loving and caring person,” said Sherry Scales, his mother, who declined to discuss the circumstances of her son’s death.

She said he would be very pleased with the donation of his heart, liver, pancreas, kidneys, lungs and other organs that extended the lives of others.

“If it weren’t for their generosity in a time of grief, this wouldn’t have been possible,” Sudan said. “He and his parents are heroes.”

Nauta’s new abdominal wall includes a new belly button, too. He hasn’t had one since he was 11.

“It’s a blessing. I would have never thought this was possible,” he said.

Nauta, who now lives in Fayetteville, said that while Duke is known for its men’s basketball team, he’d rather be on this team.

“Dr. Sudan is the Zion Williamson of the team,” he said.

“There are other patients out there like Johnathan, and sent to hospice. It’s really a shame,” Sudan said. She hopes this will help other physicians know that abdominal wall transplants are possible.

Nauta will soon leave Duke and go home. He can eat again unassisted. He was medically discharged from the Army in 2017.

Nauta’s transplant cost hundreds of thousands of dollars, Erdmann said. His insurance — Tricare, which is military insurance — and Medicaid covered most of it.

This isn’t Duke’s last abdominal transplant. Sudan said that they are in the process of beginning an evaluation of another patient.