The U.S. Army Public Health Center has issued a warning to users of e-cigarettes and other vaping products after approximately … Continued 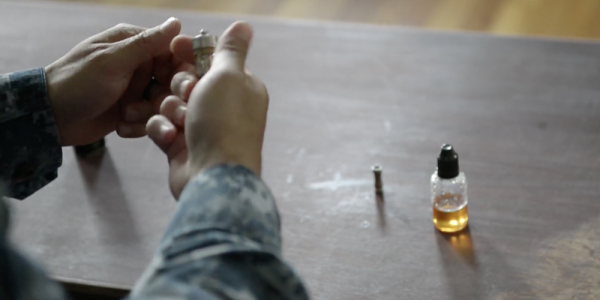 The U.S. Army Public Health Center has issued a warning to users of e-cigarettes and other vaping products after approximately 60 troops in North Carolina experienced serious medical issues.

A public health alert was issued by the center on Monday. According to officials, soldiers from Fort Bragg and Marines from Camp Lejeune have reported adverse health effects believed to be caused by vaping products that are marketed as containing cannabidiol, or CBD, oil.

Womack Army Medical Center on Fort Bragg and the Naval Medical Center at Camp Lejeune have treated dozens of troops, according to the alert. Officials did not specify specific numbers for each hospital, nor did they release the time span during which the troops were treated.

“Complications from the seizures may have resulted in significant neurologic damage in one soldier and falls/accidents resulting from seizures are blamed for the deaths of two Marines,” officials said.

They attribute the adverse health effects to man-made chemicals that are meant to replicate those found in marijuana. Army regulations prohibit soldiers from using such products.

“Although pure CBD oil has not yet been associated with adverse health effects, CBD vape oils most likely contain synthetic cannabinoids, concentrated tetrahydrocannabinol (THC) and/or other hazardous compounds in addition to, or in place of, CBD oil,” officials said.

The alert cautioned troops to make sure that vaping products they purchase do not contain CBD oil, THC or synthetic cannabinoids.