Burn Pits Saddled Him With 2 Double-Lung Transplants. Now He Wants To Ensure No One Suffers How He Has

Editor’s Note: This article by Richard Sisk originally appeared onMilitary.com, the premier source of information for the military and veteran... 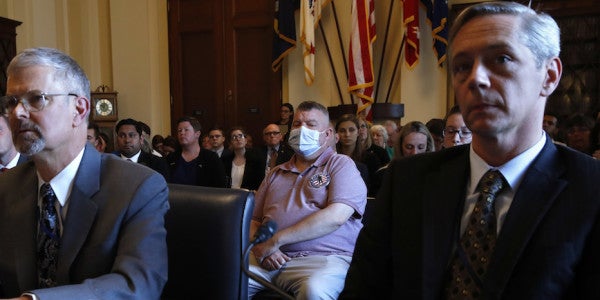 Editor’s Note: This article by Richard Sisk originally appeared onMilitary.com, the premier source of information for the military and veteran community.

“You smelled it every day, and then you'd get these dust storms that just pushed it all around,” former Army Staff Sgt. William Thompson said of the fumes and clouds of muck that came off the big burn pit at Camp Victory and other U.S. bases in Iraq.

Thompson has had two double-lung transplants since returning from two tours in Iraq. He attributes them to his exposure to the toxic brew of medical waste, human waste, plastics, tires, electronics, paint cans, routine garbage and the occasional entire Humvee that would be laced with jet fuel and set ablaze at hundreds of sites in Iraq and Afghanistan.

Thompson said he was having coughing fits before he left Camp Stryker for the last time. At Fort Stewart in Georgia, they said he had pneumonia, then it was pulmonary fibrosis. In June 2012, he had his first lung transplant, but there were signs of rejection.

“Had to do the whole thing all over again,” said Thompson, 47, of Princeton, West Virginia. In March 2016, he had his second double-lung transplant, but there are again signs of rejection.

He has to go in for more tests, he said Thursday in front of the U.S. Capitol, where he joined other vets from the Burn Pits 360 advocacy group.

The group has pressed for burn pit exposure to be recognized as a “presumptive” illness, much like Agent Orange, to give veterans access to care and benefits, but the Department of Veterans Affairs and the Department of Defense maintain that there is no proof of correlation or causality.

Thompson asked if it was OK to take a break to get into the shade. It's not good for him to be out in the sun. Sitting on a curb, he said, “We just need them to help. If you're going to send us, take care of us when we get back. I'm here because I want to help the next person.”

Erickson was testifying Thursday at the first congressional hearing ever held on assessing the “Potential Effects of Burn Pit Exposure Among Veterans” before the House Veterans Affairs Committee's subcommittee on health.

Despite the lack of correlation by VA's standards, Erickson said the department had received “a little over 9,000” claims for disability benefits from burn pit exposure. He said he didn't know offhand how many had been accepted or rejected and would have to get back to the subcommittee.

Rep. Neal Dunn, R-Florida, the subcommittee's chairman and a former Army surgeon, said veterans can get care, “but the thing that is in limbo is the disability.”

“There's a lot we still need to learn” about the effect of burn pit exposure on veterans, Erickson said, adding that several government studies are underway on a possible link between burn pits and a range of illnesses. But he had no estimate on when they might be completed.

“I don't see why we can't have any outside research” to speed up a determination on burn pit causality, he said.

In his prepared testimony, Erickson said that exposure to burn pits “and airborne hazards during deployment may be associated with adverse health consequences.”

He said the VA is working with the DoD and academic partners “to identify veterans who may be at risk and to investigate and quantify potential short-term or long-term adverse health effects that may be associated with their exposure to contaminants or toxic substances from open-air burn pits and other airborne hazards.”

Any evidence turned up by the studies will come too late for Stacy Pennington, whose brother, Army Staff Sgt. Steven Ochs, a member of the 82nd Airborne Division, died at age 32.

Ochs served two tours in Iraq and one in Afghanistan. He became ill in April 2008 and went to the Womack Medical Center at Fort Bragg, North Carolina.

Pennington said doctors thought it was a lung infection at first, later diagnosing him with acute myeloid leukemia. She said doctors told him it appeared to be “chemically induced leukemia.”

Ochs believed it was from the burn pits, she said.

“Sis, you just don't know how bad it was,” she said he told her.

“Ten months from diagnosis, and he was gone,” leaving a wife and a three-year-old child, Pennington said.

The VA's website states that “burn pits were a common way to get rid of waste at military sites in Iraq and Afghanistan. At this time, research does not show evidence of long-term health problems from exposure to burn pits. VA continues to study the health of deployed veterans.”

The VA also maintains an Airborne Hazards and Open Burn Pit Registry. Veterans and service members can go online to fill out a questionnaire for the registry on their military service, potential exposures and health history to aid in research.

The registry “can give us ideas of what we should be looking at, and what we need to prioritize,” Erickson said.

More than 143,000 veterans have filed with the registry but only about three percent have signed up for a free follow-up medical evaluation by a local VA or DoD provider, according to the VA. It noted that the “registries are not used for disability compensation or pension purposes.”

Information on the registry is available here.

Rep. Joaquin Castro, D-Texas, cited DoD officials as stating there were 63 major burn pits in Iraq and 167 in Afghanistan at the height of the conflicts.

Burn Pits 360 said the one at Balad in Iraq was a massive 22-acre site that burned up to 200 tons of waste daily.

The burn pits mostly went out of use when “incinerators or other alternate waste disposal processes became available,” according to Terry Rauch, acting deputy assistant secretary for Health Readiness Policy and Oversight at the Pentagon.

“In addition to emissions from open-air burn pit operations, other deployment-associated environmental hazards could include indigenous ambient particulate matter; exhaust from military vehicles, machinery and generators; and pollutants from local industry,” he said.

Rauch cited a 2011 Institute of Medicine report on the “Long-Term Health Consequences of Exposure to Burn Pits In Iraq and Afghanistan.”

He said the report “concluded there was insufficient evidence of long-term health risks associated with burn pit exposure,” but the report also found that “negative health effects were plausible due to the particulate matter, albeit burn pits were likely one of many factors.”

Rauch said the report also concluded there was “insufficient evidence of an association between exposure to combustion products and cancer, respiratory disease, circulatory disease, neurological disease or adverse reproductive and developmental outcomes in the populations studied.”

He submitted a written statement to the hearing and did not appear to take questions, drawing criticism from both sides of the aisle.

He said the committee is attempting to gather all input possible on the burn pits, but currently “we cannot determine one way or the other” whether burn pit exposure should be listed as a presumptive.

Rep. Clay Higgins, R-Louisiana, said it was “quite disturbing” that the DoD was a no-show. He charged that the use of burn pits in Iraq and Afghanistan amounted to “essentially deploying chemical and biological weapons against our own troops.”

Rep. Brian Mast, R-Florida, who lost both legs in Afghanistan as an Army staff sergeant, said, “The chemical attacks we really had to fear were the ones coming from inside our own camps.”

Mast engaged in a colloquy with Tom Porter, legislative director of Iraq and Afghanistan Veterans of America, on the various materials that went into the burn pits, from hazardous waste to the possibility that dioxins — the destructive compound in Agent Orange — were present.

“Year after year, we have seen an upward trend in the number of our members reporting symptoms associated with burn pit exposure,” Porter said.

Another veteran, Rep. Tulsi Gabbard, D-Hawaii, who served with the Hawaii Army National Guard in Iraq, said, “These burn pits are the Agent Orange of the post-9/11 generation.”

Around the burn pits in Iraq, “people got sick with what we knew as 'the crud.' You'd be hacking every day.”

Much of the back and forth between the House members and the witnesses focused on the need to take action now, without waiting for more studies.

Rep. Raul Ruiz, D-California, said he was “outraged by the inaction of DoD and the VA” thus far.

“We already have a high enough suspicion, and we have high enough of severe outcomes” to act before the studies are complete to “give our veterans the treatments and benefits they have earned and deserve, Ruiz, a doctor and former public health physician, said.

Former Army Capt. LeRoy Torres, founder of the Burn Pits 360 organization, did not testify at the hearing but submitted a thick statement that included photos and dates of death for 13 troops that group attributes to burn pit exposure.

Torres, a former Texas state trooper who was medically retired from the Army after 23 years, said he served near the big burn pit in Balad in 2007 and 2008.

In 2010, Torres said, he was diagnosed with a lung condition called constrictive bronchiolitis. “My medical doctors determined last month that I have toxic brain injury due to exposure to toxins, likely resulting from my burn pits exposure in Iraq.”

At a news conference with the Burn Pits 360 group earlier, Carlos Fuentes, legislative director for the Veterans of Foreign Wars, told of his own experiences with burn pits as a Marine lance corporal in Iraq.

“My sergeant said go up to that post and you're going to stay there for five hours, and that's exactly what I did,” Fuentes said.

“Well, there's a burn pit right in front of me and I wasn't able to just get off when the fumes came over or, you know, tell my sergeant, 'No, I can't go up there because there's a burn pit there.' No, I had to do my job,” he said.

When he returned from Iraq, he went to see a doctor about chest pains. “She told me, 'Well, you're too young to have any type of chest complications,' ” he said.

“We can't wait decades like our Vietnam vets waited when it comes to Agent Orange conditions. Congress and VA and DoD must improve research,” Fuentes said.

“This is not about, you know, how much is this going to cost,” he said. “Veterans have paid it forward with blood, sweat and tears. We need to make sure that if there's a link, we document it and act on it.”