Just months after federal inspectors found dead rats and rotting frogs in the reservoir system at Camp Pendleton in California,... 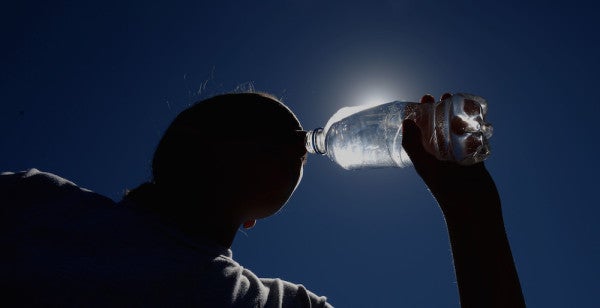 After signing a federal consent decree with the Environmental Protection Agency to address the horrifying water contamination detailed by devastating state and EPA reports in September, base officials now claim that not only is Pendleton water safe to consume, but service members were never in danger despite the “rats rotting on a reservoir gate, a desiccated frog clinging to a reservoir ladder and another rodent carcass floating in treated water” observed during inspections back in June.

“[Chlorine levels] were all at a level that would kill anything there,” John Simpson, the director of the Camp Pendleton Water Resources Department, told the San Diego Union-Tribune on Oct. 1.

But Camp Pendleton is just one of hundreds of bases under investigation by state and federal authorities for potentially hazardous water contamination — a problem experts say will affect service members and their families stationed there for generations.

As of 2016, the Department of Defense and the EPA were testing 664 closed and operational military facilities in the U.S. for water contamination. Some sites are apparently so toxic that they have been prioritized for cleanup under the EPA’s “superfund sites” list. Of the 174 federal facilities on the EPA’s National Priorities List — the department’s list of hazardous waste locations that require cleanup — 140 fall under the Pentagon’s purview, an EPA spokesperson told Task & Purpose, although “the contaminants and contaminated media (soil, groundwater, surface water, etc.) vary by site as do the types of investigation and remediation.”

That many bases are slowly poisoning their service members has been extensively documented. A Sept. 26 report by ProPublica revealed that the military is one of the country’s biggest polluters: At one point, the Department of Defense alone maintained around 39,000 toxic sites out of the nearly 300,000 nationwide — more than any other U.S. government institution.

Even worse, the Department of Defense has a lot of work to do in the way of clean-up. An in-depth investigation on water contamination on U.S. military bases conducted by Carnegie-KnightNews21 found that the Pentagon has dropped $11.5 billion to determine the scope of the problem on closed bases alone as of September 2015; the DoD will likely need to do an additional $3.4 billion worth of work, according to a Government Accountability Office report released in January 2017.

Even though the DoD has shelled out tons of cash to identify the scope of the problem instead of actually addressing it, the federal government still doesn't totally know how bad the problem is. An EPA spokesperson told Task & Purpose that Formerly Used Defense Sites (FUDS) and Base Realignment and Closure Sites (BRACS) are not included on on the EPA’s National Priorities List because the department is simply not involved in the investigations of or cleanup processes. Even if Pentagon officials were to identify an issue on those sites, it’s up to the EPA to actually address it.

It’s not just animal carcasses that are polluting the water like at Camp Pendleton: At other facilities, the chemicals that seeped into groundwater and reservoirs are from unexploded ordnance, aircraft maintenance materials, and fuel, with some of the contaminants being introduced as far back as the 1950s. Camp Lejeune in North Carolina is one such location. Labeled a superfund site by the EPA, its water is so dirty that CBS anchor Dan Rather once said it is “the worst example of water contamination this country has ever seen.” And some surmise that the drinking water is responsible for spreading carcinogens to residents.

“In the early 1980s contaminants were found in several wells that provided water at Camp Lejeune,” according to the Department of Veterans Affairs claims site. “The contaminants included the volatile organic compounds trichloroethylene (TCE), a metal degreaser, and perchloroethylene (PCE), a dry cleaning agent, and vinyl chloride, as well as benzene, and other compounds. It is estimated that the contaminants were in the water supply from the mid-1950’s until February 1985 when the wells were shut down.”

As a result, anyone who inhabited the base between 1951 and 1897 is eligible for disability compensation for “adult leukemia, aplastic anemia and other myelodysplastic syndromes, bladder cancer, kidney cancer, liver cancer, multiple myeloma, non-Hodgkin’s lymphoma, and Parkinson’s disease.”

While Camp Lejeune may be considered one of the worst sites, there are plenty more like it across the country. Instances of water pollution on military bases are not rare, as former Michigan Congressman John Dingell told Newsweek in 2014, “almost every military site in this country is seriously contaminated.”

Camp Pendleton’s battle to restore potability may be considered a win, but in the military’s war against water contamination, victory is nowhere in sight.