How To Get Ripped Like Tom Hardy, Hollywood’s Best Big-Screen Warrior

If there’s one thing actor Tom Hardy does well, it’s go to war — or, at least, acting like he’s... 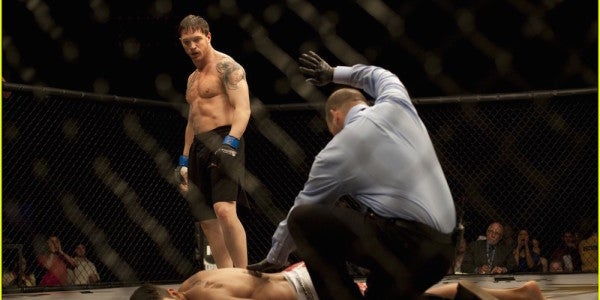 If there’s one thing actor Tom Hardy does well, it’s go to war — or, at least, acting like he’s going to war. From his role as Twombly in “Black Hawk Down” to his upcoming performances in “Dunkirk” and Navy SEAL TV series “War Party,” Hardy’s put himself through the ringer to accurately capture what it's like to throw yourself headfirst into battle.

But it’s not just his acting chops that leave moviegoers in awe of his warrior roles on the silver screen: for most of his roles, Hardy gets jacked AF. Between playing Bane in “The Dark Knight Rises,” Max Rockatansky in “Mad Max: Fury Road,” and Twombly in “Black Hawk Down,” it’s obvious that Hardy knows what he’s doing in the gym.

But he really outdid himself in preparing for the 2011 movie “Warrior,” a story about two estranged brothers who enter into a mixed-martial arts tournament that forces them to confront each other and their own demons. And it clearly takes a lot of strength to sell a performance like that.

To reach peak chiseled macho man shape, Hardy took on an insane workout regimen focusing heavily on core and upper body strength. It’s a workout so intense that it can take your dad bod and transform it into a mad, bad bod.

When Hardy auditioned for the movie back in 2009, he weighed 162 pounds, but in order to sell the character as an MMA fighter, he needed to bulk up by 30 more pounds.

“The hardest part about the training was not having enough time,” fight coordinator J.J. Perry said.

In all, Hardy went through an intensive 10-week training program with a high protein diet.

“We were eating chicken and broccoli all day, nothing else,” Hardy said. “It was horrible.”

So if you have eight hours a day to kill and enjoy a chicken and broccoli diet, you too could have Tom Hardy’s “Warrior” physique. For the enterprising, Hardy’s chest and back workout alone sounds intense. Add 100 press ups to 10 dips, and then throw in 10 bridges. You can then take the count down to seven, and then five, and then three. For the full circuit check out Men’s Health.