Why Hasn’t The Government Learned Anything From The Agent Orange Health Crisis?

In 1961, South Vietnamese president Ngo Dinh Diem asked the United States to help defoliate the lush jungle that was … Continued 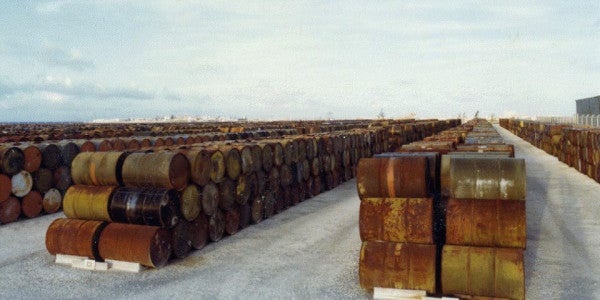 In 1961, South Vietnamese president Ngo Dinh Diem asked the United States to help defoliate the lush jungle that was providing cover to his Communist enemies. President John Kennedy acquiesced and formally launched Operation Ranch Hand, the United States Air Force’s program of systemic defoliation with the chemical compound Agent Orange. So many years later, we’re still coming to grips with the devastating effects of Agent Orange on troops and civilians alike. Decades of the government dragging its feet on dealing with the Agent Orange issue in any comprehensive way has delayed a full reckoning. New information about diseases caused by the defoliant trickle in year by year while clean-up efforts continue in Vietnam itself. The entire Agent Orange saga provides a casebook study in how not to deal with the health and environmental fallout of combat.

Agent Orange use was revolutionary in scope, not concept. During and after the Second World War, Allied forces collaborated in exploring the potential of using defoliating agents in Southeast Asia. The British put those experiments to practical use when they used pesticides and poisons to clear brush and kill crops in a counterinsurgency campaign against Communist guerrillas during Operation Malayan Emergency in the 1950s. American leaders then, in a leap of playground logic, made the dangerous assumption that such a close, English-speaking ally using defoliating agents in war meant that it was morally and legally justified for us to do the same.

According to The New York Times, “From 1962 to 1971, American C-123 transport planes sprayed roughly 20 million gallons of herbicides on an area of South Vietnam about the size of Massachusetts.” This ecocide, as some have called it, wasn’t meant to just clear jungle space for patrols and reconnaissance; it was also part of the larger strategic goal of forced urbanization.

Related: When it comes to burn pits, veterans might be on their own »

Of course, now we know how horrible Agent Orange is. According to the Red Cross, over 3 million Vietnamese were exposed to Agent Orange, and over 1 million are permanently disabled or have lingering health effects due to exposure. Those health effects include cleft palates, hernias, extra digits on fingers and toes, developmental disabilities, and birth defects such as spina bifida. The Department of Veterans Affairs recognizes the following diseases as correlating with Agent Orange exposure in veterans: diabetes mellitus, Hodgkin’s disease, Ischemic heart disease, prostate cancer, respiratory cancers, soft-tissue sarcoma, AL amyloidosis, Non-Hodgkin’s lymphoma, and early onset peripheral neuropathy, among others. The diseases caused by Agent Orange, passed on through generations and manifesting in our children, is a terrible shared legacy of the war.

But it was a massive endeavor to get any of these issues considered on a national stage. For years, the government’s official position was that the severe health issues of veterans exposed to Agent Orange were only “presumptive” or tentatively connected, usually using language that was less than conclusive when discussing the issue. Veterans had to wage a long, difficult fight in order to be recognized. There were a series of class action lawsuits in the early 1980s against Monsanto and Dow, the manufacturers of Agent Orange. The first state-run investigatory panel launched in 1980 in New Jersey and came up with some interesting new ways to test dioxin levels in the blood, but the project, which was run in conjunction with Rutgers University, was disbanded in 1996. It wasn’t until Congress passed the Agent Orange Act in 1991 that the VA was given authority to recognize and treat Agent Orange exposure — and to give compensation for veterans as well. The act isn’t perfect, but it’s something.

The only study conducted right after the war, the Air Force Health Study, reached the dubious conclusion that Agent Orange didn’t cause ill health effects. It’s a conclusion that’s been since repudiated by myriad independently conducted studies (including one linking Agent Orange to bone cancer) and anecdotal testimony from people suffering from Agent Orange-related illnesses in places where the defoliant was buried. In the latest news, the list of Agent Orange-caused diseases is actually expanding to include bladder cancer, hyperthyroidism, and “Parkinson’s-like” symptoms. Meanwhile, the United States has been gradually increasing its funding for clean-up efforts of dioxin hotspots in Vietnam over the past few decades, with the latest effort having a price tag of $100 million.

So how do we avoid another Agent Orange issue in the future? The most obvious answer seems to be conducting a comprehensive and honest study of the health effects of our wars, and to not wait 50 years to do so. Realizing that the military and its private contractors aren’t omniscient, having a list of known health effects expanding almost 60 years after the fact isn’t a sign of an honest mistake. It’s a sign of not wanting to actually know the truth from the outset. An unwillingness to approach the full consequences of our wars with complete candor is unfortunately being echoed in the VA, and larger government, response to burn pits.

Let’s not make the same mistake here that we did with Agent Orange. There’s no reason why the list of known health effects of burn pit exposure should be expanding in 2060. Veterans and our children simply can’t wait that long.