The Health Expert’s Guide To Boozing Like A Pro

Editor’s Note: This article written by Nicole Brender was originally published on Greatist, a digital publication committed to happy and … Continued 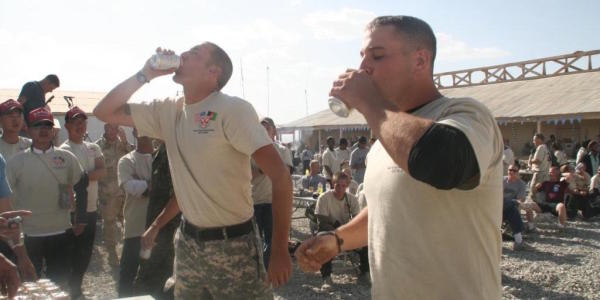 Editor’s Note: This article written by Nicole Brender was originally published on Greatist, a digital publication committed to happy and healthy lifestyle choices.

What’s the healthiest way to drink? Sadly, the answer is not to. But, since that wouldn’t be too fun, it’s essential to learn what to do before, during, and after drinking to prevent hangovers and beer bellies.

Our bodies interpret alcohol as toxic and the liver needs both time and water to get rid of it. And often our livers simply cannot keep up with our fast drinking pace. To process the toxin, the liver pulls water from all the organs, including the brain, leaving us dehydrated. When pairing alcohol with sugary mixers, our stomachs pull in extra water from around the body adding more fuel onto the dehydration fire and causing alcohol related runs, which are never too fun.

The good news is that some research indicated drinking in moderation can be heart healthy by lowering blood pressure, increasing blood flow, and increasing the HDL, or “good” cholesterol. The bad news is that “moderation” means one drink per day for women, two per day for men. One drink includes 12 ounces of beer, five ounces of wine or a 1.5-ounce shot of hard liquor.

Drinking poses a triple threat to weight gain because alcohol itself, what it’s mixed with, and what is eaten after all have calories. Alcohol is calorically dense, meaning it has a lot of calories for a little amount. To compare, carbs and protein have four calories per gram, fat has nine calories per gram and alcohol has seven calories per gram. The calories in hard liquor depends on the proof, which refers to the percent alcohol by volume. So, higher proofs mean more alcohol and more calories. On average a 1.5-ounce shot of hard liquor has about 60–80 calories depending on the proof. And that’s before downing any chasers.

The key to preventing a hangover is hydration. Drink plenty of water the day of your big party. If plans are an after work happy hour, drink an extra 8 ounces of water at lunch and right before heading out.

Eating before regulates blood sugar levels, helping to avoid a large spike and drop, which is common while drinking. A perfect meal would be rich in lean protein (think turkey, chicken breast, fish) and whole grains and low on fat and salt (keep the fries and soy sauce in check). Fatty meals can lead to bloating and diarrhea, which alcohol does not help. Salty foods will make you thirsty, tempting you to drink quicker to quench your thirst.

After the night out

Oh boy, this is where a day’s worth of food is eaten in one sitting. When sloppily coming home, first thing is drink 8 to 10 ounces of water. Leave a glass of water waiting for you. This may fight overeating because our bodies often misinterpret thirst for hunger. Don’t leave tempting foods staring you in the face. If you happened to bake a batch of cookies that morning, don’t keep them on the front table. Try to stock up on healthier snacks, like whole grain cereal, popcorn (kettle or lightly salted), pretzels, grapes, berries, rice cakes, frozen yogurt/sorbet, hummus and peanut butter. We often avoid lean leftovers, like a turkey sandwich or chicken to avoid the guilt of eating a whole other meal. But, it’s usually a way better choice than downing a bag of chips or tub of ice cream.

This article, “The Health Expert's Guide to Boozing Like a Pro,” originally appeared on Greatist.