A lot of changes hit the Marine Corps’ annual physical fitness test this year: a sliding point scale based on... 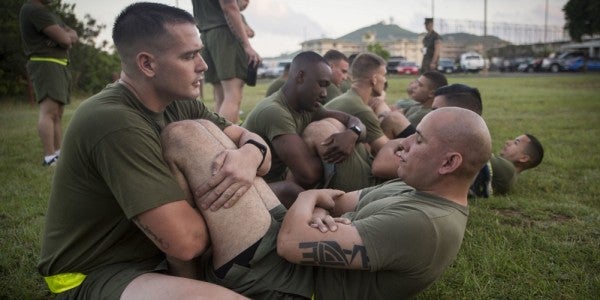 A lot of changes hit the Marine Corps’ annual physical fitness test this year: a sliding point scale based on age; pull-ups for female Marines; a rowing option for those over 46; swap push-ups for pull-ups; and the chance to take the test more than once. Task & Purpose reached out to some of the devil dogs who recently took the PFT to find out how the changes are impacting their performances.

Perhaps the biggest change to the PFT was the implementation of pull-ups for female Marines, which was implemented in January. Previously, women had to do a flexed-arm hang. The Corps has stated that the changes to the tent were centered around raising the overall fitness standards for all Marines, but some in the service aren’t buying it.

“Training females to do pull-ups is not necessarily the greatest idea,” Gunnery Sgt. Candace Burgess, a 38-year-old motor transport operations chief with Headquarters and Support Battalion at Camp Lejeune, North Carolina, told Task & Purpose. Burgess, who ran the PFT on June 13, started training for it back in January when word of the changes first dropped.

“With the new PFT changes, we’re trying to appease the political view because for years people have been crying that female Marines have it easy,” Burgess said, referring to the different set of PFT events and scoring standards for male and female Marines.

Under the old PFT standards, male and female Marines performed two different sets of exercises on the pull-up bar with different scoring methods. Now, even though both men and women have to do pull-ups, the underlying problem — that they’re scored differently — still remains, Burgess said.

Related:What You Need To Know About The New Marine PFT »

“I think these changes feed the stereotype,” Burgess said. She maxed out her pull-ups and scored a 295, five short of a perfect score. “If you think about it, a male Marine my age is not doing eight pull-ups, he still has to do 21 pull-ups to get his full points and I have to do eight.”

Others argue that the new standards — in particular, pull-ups for female Marines — are a good thing.

“I like the change,” Sgt. Kesz Wesley, a water support technician with Weapons and Field Training Battalion at Recruit Depot San Diego, California, told Task & Purpose. Wesley took the test earlier this month and knocked out her max pull-ups for score, which was nine, and then proceeded to pump out six more for kicks.

Those who score a high first class, 285 and above, on both the PFT and the Corps’ combat fitness test are given a pass on the service’s notoriously strict height and body weight standards. Marines with a score of 250 to 284 on both tests will be allowed an additional 1% body fat — good news for those PT studs who are built big and strong, rather than lean and quick.

“As far as the pull-ups go, I’ve been training for it beforehand, so I was pretty prepared for that part,” she said. “I know a lot of females that were stoked about doing pull-ups because they feel like we have a lot to prove. I might only have to do nine, but I’ll still do 15.”

Beyond pull-ups for females, there are a whole slew of changes which affect all Marines, and the biggest challenge?

“Crunches,” Staff Sgt. Don Valdez, a 36-year-old infantry platoon sergeant with Kilo Company, 3rd Battalion, 25th Marines told Task & Purpose, adding that with the new standards a part of the test that used to be the easiest is now a bit more difficult. (Valdez is also sales director at Task & Purpose.)

“I think they changed the standards on crunches because everybody gets 100 crunches every time,” Sgt. Gunnar Naughton, a 24-year-old chemical, biological, radiological, and nuclear specialist, told Task & Purpose. “People take that as a given. It’s never really questioned whether someone is gonna have to work on that portion.”

Others think the new standards necessitate a change in how Marines treat all aspects of the PFT, not just crunches.

“If people were running it the right way — like if you do 100 crunches the way you’re supposed to — it’s pretty challenging,” Sgt. Marco Mancha, a 26-year-old Marine with 1st Marine Raider Battalion, told Task & Purpose. “I think there’s a reason they changed the pull-ups and crunches, and not the run. With the run, the time you get is the time you get.”

The option for Marines to swap out pull-ups for push-ups, a significant departure for the pull-up centric Marine Corps, comes with a catch: You can’t score the full 100 points for push-ups, only 70, and not many Marines seem to be going for it.

“During this PFT, I’d say 95% of the Marines just did pull-ups, crunches and the run,” Staff Sgt. Charles Frangis, an infantry platoon sergeant with Kilo Company, 3/25 told Task & Purpose.

“If you can’t do pull-ups, chances are you won’t do well in push-ups,” Frangis, who is 46, said. His sentiment was mirrored by other Marines Task & Purpose spoke to.

“Nobody does the push-ups,” Naughton said. “The only reason why it would be good for you to do the push-ups would be if you did less than 15 pull-ups, but could do 70 push-ups.”

For those straddling that line between a first and second class PFT, the test was a wake-up call, Naughton said.

“Everybody was terrified they would get a second class,” Naughton, who scored a first class on the new PFT in June, said that the high first class PFT he had last year would have been a low first class under the new standards. “It was a wake-up call for me to train harder for the new PFT, because everyone was talking about it every day.”

That may not be entirely bad news, though, especially for a service that prides itself on physical fitness.

“To me doing the minimum standards on a PFT or a CFT, that shouldn’t be what you’re shooting for,” Mancha said. “You join the Marines for a reason: Physical fitness. It’s what we do.”