How do you explain combat related post-traumatic stress disorder to your children? It’s hard enough to rationalize the anger, confusion... 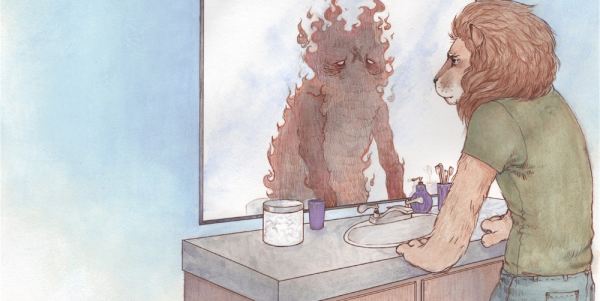 How do you explain combat related post-traumatic stress disorder to your children? It’s hard enough to rationalize the anger, confusion or self-doubt with oneself — or convey how you feel to your spouse or family — but how do you get it across to your son or daughter that what you’re feeling stems from an event long since passed? The answer may lie in the title of Seth Kastle’s children’s book, “Why is Dad so Mad?”

The question is simple, honest and innocent, and maybe the response should be too.

Kastle, an Army Reserve veteran who served in Iraq and Afghanistan, came up with the idea as a way to explain his struggles with PTSD to his daughters, ages two and six.

“This is basically my story,” 33-year-old Kastle told Task & Purpose in an interview. “That’s why I wrote about it. This is something I struggled with for over 10 years when I came home. It was one thing when it was just me and my wife, but after you have kids everything changes.”

Kastle, who is now an instructor of leadership studies at Fort Hays State University in Kansas, said that he looked for resources to help him explain to his kids what he was going through, and why he felt the way he did, but there was nothing there.

“I wrote the book ‘Why is Dad So Mad?’ to try to help them understand why I am the way I am now,” reads Kastle’s biography on his website. “This is not who I used to be, but it is who I am now; this is reality. More than anything I want my daughters as well as the children of other services members to know that no matter what we, as fathers love them more than anything.”

Kastle told Task & Purpose that he used to explain his struggles with PTSD by telling his daughters that it was like a fire growing in his chest, and after the book was published, he read it to his older daughter.

“She told me she was sorry I had a fire in my chest now,” Kastle explained. “The whole purpose of all of this, is for parents to be able to communicate with their kids that the reason dad or mom is mad, isn’t because of you.”

“That’s why I did this,” said Kastle. “This was something that was in the back of my head for a couple of years. I just never actually sat down and did it.”

But, after a bad day at work, Kastle said he came home, sat down and “knocked it out in about 30 minutes.”

“I’m at the perfect point in my life to write a children’s book because I’ve read about a million of them,” said Kastle. “I knew what I needed to communicate in this book. I guess it was just inspiration from God to make me put this out and make it relatable. I’m not that good of a writer.”

And that might have been it, said Kastle, but a co-worker prompted him to make good on what he started, and he did. After meeting with illustrator Karissa Gonzalez-Othon, Kastle told her he wanted the characters to be animals because he didn’t want the people to be associated with any race, “because soldiers, we come from everywhere.”

Gonzalez-Othon decided to use lions because the male was easily distinguishable from the female.

After starting a crowdfunding campaign on Kickstarter, Kastle met his goal of $3,000 in just eight hours, raising more than $6,000 total. He said he will use the extra money to help pay the production costs for future children's books.

The book was published March 24 by Tall Tale Publishing, and Kastle already has another story scheduled to come out this summer for mothers struggling with combat-related PTSD called “Why Is Mom So Mad?”

“I consulted with female combat veterans on this to make this as true to life as possible, and we’re hoping that book will be released the end of July early August,” he said, adding that he hopes to start a “Why?” series aimed at tackling significant social issues within the military and veterans communities.

“The book isn’t the end all be all, or the magic solution, everyone experiences this differently,” Kastle added. “But, my hope is that it’s enough to start a conversation.”

army reserve
PTSD
seth kastle
why is dad so mad