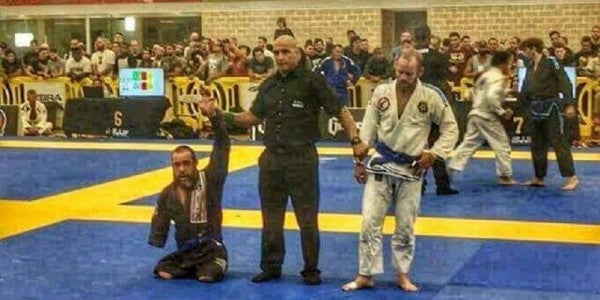 With seconds left on the clock, Army veteran Joey Bozik landed a wrist lock and secured his first competitive win at the International Brazilian Jiu-Jitsu Federation Austin Open on July 22 in Texas. And he did it with just one arm.

A triple-amputee, Bozik lost his legs and his right arm below the elbow in October 2004 when his Humvee rolled over a roadside bomb in Iraq. As part of his recovery process, Bozik turned to jiu-jitsu and began training five to six days a week.

“It started off as just something to do physically, to keep myself active, something to do with my kids,” Bozik said in an interview with WFAA, an ABC News affiliate in McKinney, Texas. “But in the end, it became a personal focus as well, getting better both physically and mentally.”

The cofounder and president of the We Defy Foundation, which uses martial-arts training to rehab vets with PTSD or other war wounds, Bozik has been training and competing for the last three years.

But last Saturday’s match marked his first competitive win — against an able-bodied opponent, no less.

“This single experience has been years in the making,” Bozik wrote in a July 24 Instagram post. “One loss after another. One disappointment after another. Although showing up and competing is a victory in itself; showing everyone (including myself) that all the hours of sweat, blood, and yes sometimes tears have a purpose, is something not many get to taste in their time.”

The We Defy Foundation offers courses and training in jiu-jitsu for combat veterans suffering from disabling injuries and post-traumatic stress, according to the group’s website. There are now 70 veterans across the country learning the martial art through We Defy, with another 40 waiting for an opening, according to WFAA.

“Jiu-jitsu has literally saved my life,” Bozik wrote in a testimonial on We Defy’s website. “After a good night of rolling, when I go home at night I am a better father, husband, and person. Through my experience, I have seen this type of therapy change lives for the better.”