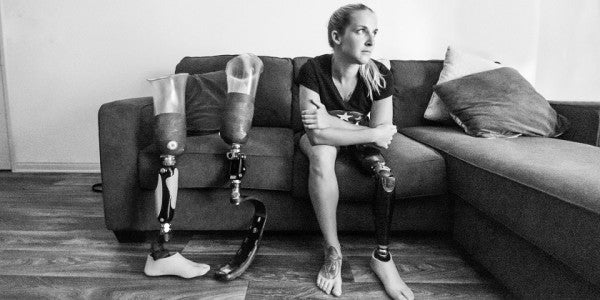 Marine veteran, mountain climber, amputee athlete, and all-around badass Kirstie Ennis recently made the cover of ESPN The Magazine’s annual Body Issue, the first veteran to grace its cover. The yearly spread features nude and semi-nude photos of male and female athletes from all sports and vocations, both on and off the field, as a testament to the perseverance of both the human body and will — something Ennis captures perfectly.

“Find your passion, and let it consume you,” Ennis wrote on Instagram, where she posted a photo of the new cover on June 30 . “If a little one-legged lady can climb rocks and chase mountains, I promise you, you can do whatever it is your heart desires.”

For Ennis, her decision to pose for the magazine came down to one thing: Don’t set any limits for yourself.

“I really thought about it and thought about the demographic and the people that would see it and I really realized that it wasn’t about me anymore,” she told People magazine. “Any man, woman, or child facing some sort of adversity has a potential to be inspired by these pictures and seeing somebody who only has been missing their leg for a few years go out and do things that she wasn’t doing with two legs.”

On June 23, 2012, Ennis was critically injured in a helicopter crash while serving as an aerial door gunner in Afghanistan’s Helmand province, suffering a traumatic brain injury that resulted in memory loss, as well as severe damage to her face, spine, left leg and shoulders.

“I was kind of ripped apart,” Ennis said of her injuries in a previous interview with The Veterans Project. “The last thing I remember was the screaming I heard. I was kind of in-and-out from there. My leg was mangled and snapped, my right shoulder was destroyed, I could fit my fist through my face and my jaw was completely destroyed. … From that moment on, I was just fighting to stay awake.”

After years of surgeries and physical rehabilitation, Ennis’ left leg was amputated below the knee in November 2015, but an infection resulted in a second amputation above the knee. A lifelong athlete, Ennis returned to sports as part of her recovery, competing in the 2016 Invictus Games and climbing Mount Kilimanjaro this past April, and is believed to be one of the first female above-the-knee amputee to do so.

“It’s the six inches between your ears and what’s behind your ribcage that really makes the difference,” Ennis said in her interview with ESPN. “Forty-four surgeries, years of therapies, years of learning how to use my brain and body again, but I’ve yet to let it beat me down.”