It looks like a submerged version of the Thunder Dome, or a very rowdy game of water polo, but with... 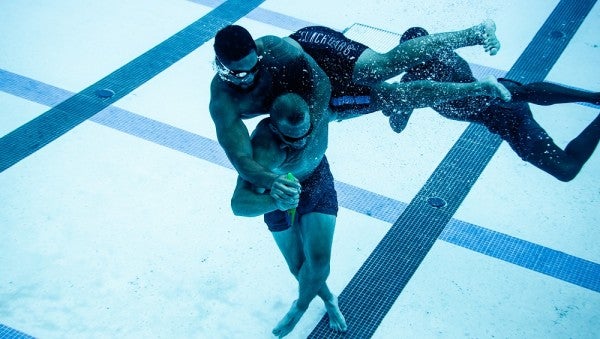 It looks like a submerged version of the Thunder Dome, or a very rowdy game of water polo, but with more moto-tats. Pioneered by some of America’s most elite warfighters, it requires extreme stamina, athleticism, and confidence. And it’s gaining traction far beyond the special operations community where it began.

Called Underwater Torpedo, the sport was developed by a group of Marine Raiders as a swim-training tool to help them remain calm underwater. But if you’ve watched any of the gameplay footage, or seen the photos, it’s hard to imagine this has a calming effect on anyone:

Underwater torpedo was pioneered by a group of Marine special operators as a way to practice remaining calm and controlled while diving.Courtesy of Prime Hall/Underwater Torpedo League

“In training sometimes you get these instructors that are strictly sink or swim, and there’s definitely times you need that, but in pool training — a lot of people have had bad experiences in the pool — it’s best to have a ‘calm breeds calm’ training approach,” Prime Hall, a former Marine Raider and the game’s creator, told Task & Purpose.

The genesis for the sport began simply enough: Tossing a torpedo underwater and watching it zip across the pool gives you something else to focus on. You’re less concerned with your air, and more interested in making precise passes — one, two, five, ten, and so on.

“The reason why the torpedo is effective is that everybody has anxiety as soon as they go under the water,” Hall said. “They think, ‘where’s my air source.’ But if you have a focus, something that takes your mind off that, it eases that anxiety. It almost blocks it.”

The next logical step was to make a game out of it, one that would replicate the some of the rigorous training Hall underwent as a water survival instructor, and that would prepare him for the training he’d face as a Raider. In 2009, that’s precisely what Hall and his fellow instructors did at Camp Horno, San Diego, California while awaiting Raider selection.

Here’s how it works: Two teams of five square off on either side of the deep end of a pool, with substitutes waiting on sidelines. The aim is to get the torpedo into the other team’s goal in order to score. Each game is broken down into three matches, with five rounds each — the team that wins the most matches wins the game.

But that’s easier said than done: The sport takes place almost entirely underwater. Players can surface to catch a breath, but they can’t surface with the torpedo — otherwise, there’ll be a penalty drop and the torpedo will go to the other team. What this means in terms of actual gameplay is that players need to precisely time when they’ll surface for air with everything that’s taking place on the “field.”

As for what’s happening in the water, it comes out looking like a darting, diving, free-for-all, with any player in possession of the torpedo fair game to be tackled, or grappled with.

“We played it every day, and we got really proficient at it, and built the framework of the game,” Hall told T&P.; “It was obviously my passion, and I was the one who was making deals with my captain so I could get all the guys in the pool so we were ready for dive school, but really, I wanted to play the game.”

In the years after the game was created, it spread from Hall’s team, to other Raider units, and to the wider SOF community. When Hall was medically discharged in 2017, he kept playing, eventually founding the Underwater Torpedo League, which runs one and two-month camps at a number of Southern California pools. The UTL includes more than 100 vets, professional athletes, and service members — including some of Hall’s former teammates, Rick Briere, Derek Herrera, and Don Tranand — and has even earned a bit of limelight, appearing on ESPN during this year’s championship game, called the Aqua Bowl.

But for all the underwater acrobatics, the game has a pretty good track record on injuries Hall said. Since it’s played without fins, a player’s momentum builds slowly, and the blows are softened.

“We’re only down there with our natural swimming ability,” Hall explained. “I only have so much force coming at you even swimming at full speed, so you’re coming from zero to one arm action under water toward your opponent, and there’s so much weight you have to pull through under water to impact with them, that we don’t really see anyone hurt.”

Plus, each match has a dedicated referee in the pool to keep an eye out. “The water keeps everybody honest,” Hall said. “We played with Raiders, SEALs, everyone for ten years, and we haven’t had anyone get significantly hurt, to my memory.”

Beyond the physical stamina required for the game itself, Hall puts his players through some rigorous fitness, both in and out of the water:

“At the end of it,” Hall said, “you drive away in your car and you’re like, ‘holy shit I just scored over these guys,’ or ‘I never thought I’d be walking a kettlebell underwater with three people riding on my shoulders for 45 seconds,’ or ‘I felt like I was Superman when I was riding on that guy’s shoulders.’”