Not all heroes wear capes, and not all athletes play sports. Some of them, like retired U.S. Marine officer George … Continued 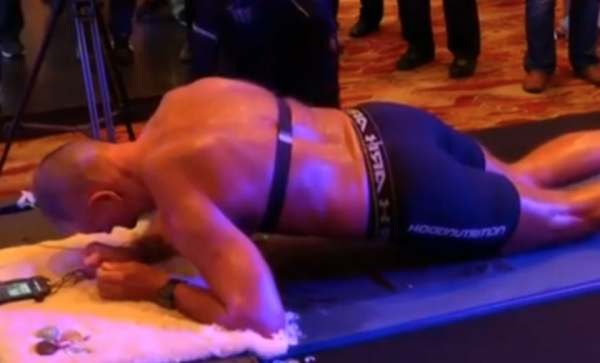 Not all heroes wear capes, and not all athletes play sports. Some of them, like retired U.S. Marine officer George Hood just exercise very, very intensely. In 2015, Hood set the Guinness World Record for “planking,” a competitive exercise that entails using one’s forearms and toes to keep the legs and torso elevated several inches above the ground, straight like a wooden plank.

This year, on May 14, during an international competition in Beijing, Hood not only broke his record of five hours, 15 minutes, and 15 seconds. He shattered it. His time: 7:04:05 — an extraordinary feat considering that planking is generally regarded as one of the toughest exercises a person can perform, but not extraordinary enough to maintain his world champion status.

That distinction now belongs to a Chinese police officer named Mao Weidong, who beat Hood’s time by nearly an hour, setting a new world record of 8:01:01. “He was up against the best,” said a defeated Hood, his body dripping with sweat. “Tremendous respect here for this man. I mean that, truly.” Meanwhile, Weidong, who seems to be something of a show off, celebrated his victory by knocking out seven extraneous pushups.

Correction: An earlier version of this article misspelled the name of an athlete. His name is George Hood, not George Wood.