Earlier this month, I found myself on the verge of throwing up from exhaustion as I did jumping jacks in... 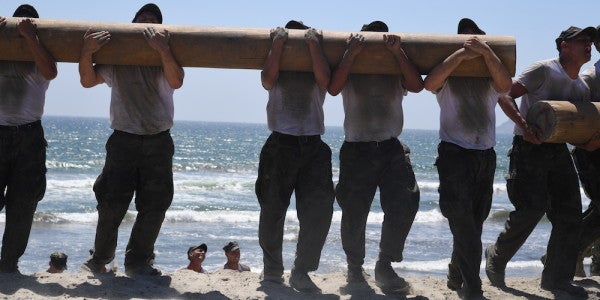 Earlier this month, I found myself on the verge of throwing up from exhaustion as I did jumping jacks in the middle of Bryant Park in Manhattan. It was sometime after 5:00 a.m. and the sun had yet to rise.

I had woken up at 3:15 that morning to prepare for the start of “Muster,” a two-day leadership conference led by former Navy SEAL commanders Jocko Willink and Leif Babin.

Willink and Babin are the cofounders of management consulting firm Echelon Front and the coauthors of New York Times bestseller “Extreme Ownership.” They waived Muster's roughly $2,500 fee for me and Business Insider video producer Joe Avella.

That's me with the red shorts, getting in some pre-dawn flutter kicks.

That first morning, 300 Muster participants and I gathered at 4:45 to spend an hour going through a gauntlet of six exercises: flutter kicks, push-ups, squats, jumping jacks, sit-ups, and burpees. We performed each exercise for two minutes and then ran to the next station, repeating the cycle twice and then ending with 48 burpees.

I'm not going to lie and tell you that since this workout I've jumped out of bed at 4:30, or even 5:30, to go run five miles followed by 50 pushups. But this experience did teach me a lesson about discipline.

The night before the workout, I dreaded getting up at such an ungodly hour. From the moment I opened my eyes at 3:15 through the last burpee I did in the park, a voice somewhere in my consciousness was trying to tell me I should give in and rest. And though there were times when my form was dreadful, I made it through the workout despite the lack of sleep, and made it through the conference and some time back at the office.

I've been reminding myself of that ever since, whether it's pushing myself working out after work, getting up early to go for a run when I'd rather get more sleep, or focusing more intently on a project.

Babin told me later on that they didn't get their Muster group up for an early morning workout just to “kick their pants in,” but to make a point about self-discipline. He said they also wanted everyone to feel the power of how we can both motivate and be motivated by our peers.

Willink has made a habit of tweeting a photo of his wristwatch every morning around 4:30 to hold himself accountable for a pre-dawn workout.

He's made it a habit for three primary reasons: Starting your day with physical activity “puts you in a state of mind where you can crush things, which is where you want to be,” it gives you your entire morning to get things done, and it builds a habit of self-discipline.

Even if you're in great shape, it can be difficult to force yourself to get out of bed and work out, and that's the point. It connects to their general point about taking ownership of yourself and your responsibilities.

“That's why we like to do that early morning PT, physical training, because it is the root of the discipline that you need as a leader,” Willink said.