People Doubted This Army Amputee In A Bodybuilding Competition, Until He Took His Shirt Off 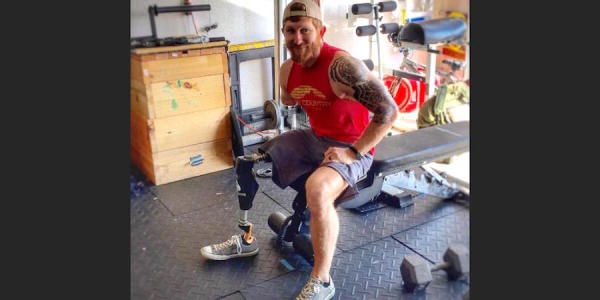 After enlisting in 2003 and serving two tours in Iraq, Bullock decided to take on the elite Army Special Forces training and become a Green Beret. After a number of tours in South America, he returned to the Middle East, until the IED explosion cost him two limbs and his military career.

“I’ve had my bad days, but my family and my friends have always been there for me,” he told Task & Purpose in an interview.

For Bullock, who has had 30 surgeries since being injured, it may have been the end of his Army service, but it was the beginning of something new.

To aid in his recovery process, Bullock turned to fitness. Once fitted for his prosthetic leg, he began racing. And although he hadn’t been a competitive runner before, he found that challenges helped him not just get stronger physically, but mentally.

Soon after, Bullock began lifting, too. And on Oct. 2, he took fifth place at his first bodybuilding competition.

“That was my first show, and everyone was pretty quiet and reserved,” he said. “You could tell that they had those kind of doubts in their eyes, like, ‘I don’t know why this dude is here.’”

Bullock said that it was funny, adding, “When I took my shirt off, they were just like, ‘okay.’”

Though he felt like there was skepticism about his ability to perform in the beginning, by the end, no one doubted he deserved to be there, and the rowdy crowd was cheering him on.

“I had beaten like seven other guys with four limbs,” Bullock said.

This day was a win for Bullock, and he is optimistic for the future. Right now, he is working on his degree, and making up for lost time with his wife and son.

“One of the things I started doing in the hospital was setting goals for myself … and they kept growing,” he said. “Who knows, maybe I’ll be skydiving one day.”