More Than Half Of Wounded, Sick, And Injured Post-9/11 Veterans Are Rated Obese

Editor’s Note: This article by Richard Sisk originally appeared on Military.com, a leading source of news for the military and veteran community. A new... 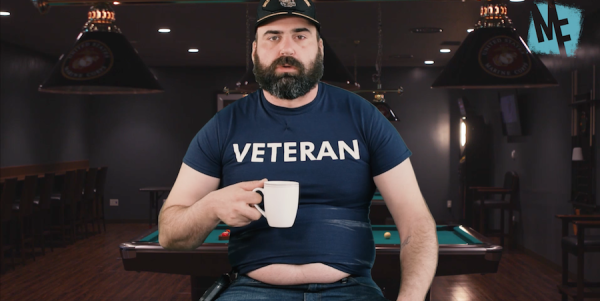 A new survey by the Wounded Warrior Project finds that more post-9/11 veterans are using the GI Bill, receiving disability benefits, are homeowners and have jobs. But the same poll noted another rising trend that may affect these veterans' overall future well-being: more than half are rated as obese.

“Warriors are not as healthy as we would like,” said Dr. Melanie Mousseau, Wounded Warrior Project (WWP) director of metrics, of the finding that 51.7 percent of the more than 33,000 survey respondents were obese, according to their body max index, or BMI, and of that total, 6.2 percent were rated as “morbidly obese.”

The 2018 survey showed that 43.8 percent of female veterans had BMIs in the obesity range compared with 53.2 percent of males.

In addition, just 12.8 percent of the respondents in 2018 had BMI measures in the healthy weight or underweight range, according to the survey.

“Unfortunately, weight issues continue to be a major challenge for warriors and the trend is not improving,” the survey noted.

The survey of more than 33,000 veterans registered with WWP helps guide the organization in “our internal decisions on where we put our money,” said retired Army Lt. Gen. Michael Linnington, chief executive officer of WWP.

It also is intended to “inform and prepare our troops and their families for future conflict while improving the support we provide when they return home,” he added.

Throughout the survey and in the comments of veterans who participated, the importance of focusing on the transition from military to civilian life was stressed as the key factor in rehabilitation.

But the standout statistics were the ones on weight.

In a panel discussion Tuesday on the survey sponsored by the Brookings Institution, Mousseau and others noted that the survey respondents included wounded and injured veterans — and those suffering from post-traumatic stress disorder (PTSD) and sleep disorders — that can limit their ability to exercise or adopt healthy eating habits.

About two-thirds of the respondents reported they are limited in even moderate activities, such as moving a table, pushing a vacuum cleaner or going bowling, the survey said. More than seven in 10 reported that pain limited them to some degree in their work inside and outside the home.

Mousseau added that lingering effects of stress from combat experiences and the transition to civilian life could also affect the ability and willingness of veterans to engage in physical activity.

“I think with any type of uncertainty and/or change, there is a heightened sense of stress,” Mousseau said. “With stress comes a myriad of other challenges.”

Wounds that won't go away

One of the key findings of the survey was on the long-term psychological effects of combat, the so-called “invisible wounds” of war that can be as disabling as physical wounds.

According to the survey, “two thirds to three-quarters of warriors have had a military experience that was so frightening, horrible, or upsetting that in the past month they have not been able to escape from the memories or effects of it.”

More than 77 percent of participants reported feeling the need to be constantly on guard or watchful, and they were easily startled. Roughly 75 percent said they felt “numb or detached from others, activities, or surroundings,” the survey said. Nearly 66 percent reported having nightmares about their experiences..

The comments veterans attached to their survey responses reflected their inner struggles: “I feel like no one really understands anything about me anymore. I want to be involved but it feels like people are afraid of me,” said one.

“Learning how to adapt is the most challenging — how to be social, just so friends and family don't jump to conclusions that something is wrong, learning how to keep your mind so busy that there is no opportunity for intrusive things. There is no alleviating this challenge,” another wrote.

The comments also reflected the “stigma,” real or imagined, that many veterans feel is attached to military-related mental health conditions — even among veterans.

“It seems people assume that having PTSD makes you a psychopath that wants to harm people. In reality, I just want to be left alone,” one veteran said.

Another spoke to his discomfort at being in a group with combat veterans, when his experiences were not related to actual combat.

“It's hard for a member of the Coast Guard to sit in at a PTSD group of combat veterans when your experiences were non-combat related but involved such events as decapitated children, boating accident deaths, suicides of fellow service members and the stress of being overworked for years,” the veteran said. “Most just can't understand where you've been.”

The survey showed a slight decrease in the percentage of respondents who said they had difficulty getting mental health care, put off getting such care, or did not get the care they needed (33 percent in 2018, compared with 35 percent in 2014).

About 78 percent of respondents said they experienced PTSD during their military service and were still dealing with the effects, compared to 75 percent in WWP's 2014 survey.

WWP began doing the surveys in 2010, and the 2018 version, done with Westat, an employee-owned research services firm, provided the “nation's largest and most comprehensive survey of wounded, injured and ill veterans who have served post 9/11,” Mousseau said.

The demographics showed that 83.5 percent of respondents were male, with a mean age of about 40. About two-thirds were married (66.5 percent), and more than half were from the South (53.1 percent).

The four most common injuries or health problems reported by the respondents were: PTSD, 78.2 percent; sleep problems. 75.4 percent; back, neck and shoulder problems, 73.7 percent; and depression, 70.3 percent.

For post-9/11 veterans, classified as “Gulf War-era II veterans” by the federal Bureau of Labor Statistics (BLS), the unemployment rate was 3.1 percent in October, compared with 3.9 percent September, according to BLS. But the WWP survey showed that respondents had an unemployment rate of 11 percent, lower than the 14 percent determined by the 2014 survey but still higher than the federal statistics.

The main reasons given by the respondents for not being in the labor force were: mental health problems (37.4 percent); physical injury (24.3 percent); retirement (15.6 percent); and enrollment in school or a training program (13.8 percent).

The survey also showed that more veterans were using the VA for primary and mental health care, and more were taking advantage of the GI Bill for education. About 36 percent had attained a bachelor's degree or higher in 2018, compared with 25 percent in 2014, the survey showed.

About 90 percent of the respondents reported receiving VA disability benefits in 2018, compared with 72 percent in 2014, and 62 percent had disability ratings of 80 percent or higher.

The main reasons given for not using the VA as the primary health care provider were difficulty of accessing (45.2 percent), problems with the bureaucracy (43.0 percent), and bad prior experiences (44.5 percent).

The survey concluded that there were more similarities than differences in the surveys conducted in the past three years, but all reflected “continued challenges with physical and mental health problems” and “modest economic improvements” in an aging veterans population.

“The transition to civilian life continues to remain challenging for many,” the survey said, and those challenges “extend to their family members and other caregivers.”