EXCLUSIVE: Preliminary Results For The PFT Are In. Here’s What They Say About The Corps’ Youngest Marines 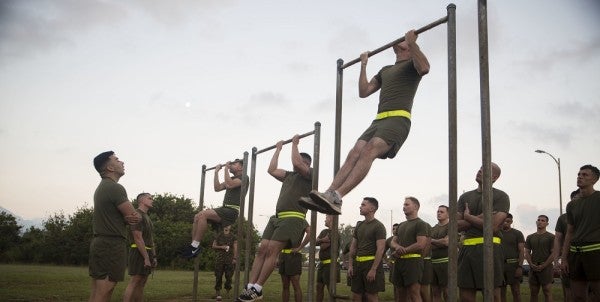 An analysis of the service’s most recent PFT scores, provided to Task & Purpose under a Freedom of Information Act request, shows that among the youngest devil dogs, the share of Marines who received a first class PFT score has gone down for the first time in recent years. The share of second and third class PFTs rose slightly.

The news isn't all bad, though. Even as overall PFT excellence is growing harder to achieve, Marines on average are improving significantly on individual events. And the share of PFT failures is way down so far.

“We are expecting at least initially there will be fewer Marines in the first classification, but that doesn’t mean necessarily that their physical performance has dropped,” Brian McGuire, the deputy director of the Corps’ Force Fitness Division, told Task & Purpose.

The Marines rolled out a number of sweeping PFT changes this year, including tougher requirements for individual events; a sliding point scale for events based on age; the implementation of pull-ups for female Marines; and new standards for a first class score. The PFT changes, implemented in January at the behest of the commandant, Gen. Robert Neller, is part of a broader overhaul of the Corps’ fitness programs.

The data obtained by T&P are preliminary and limited to Marines ages 17 to 26. The annual PFT season began in January and ends this month, so it will take the service time to collect and crunch numbers across the Fleet Marine Force. This is the first in a series of stories about the Corps’ changes to its physical fitness test.

The 2017 data cited here are based on the PFT scores of 46,668 male and 2,990 female Marines between the ages of 17 and 26 who took the annual test between January and April this year.

Male Marines experienced less dramatic changes, but similar trends. However, failures have nearly halved for both men and women, suggesting that while the test is tougher to ace, fitness levels aren’t decreasing — they’re on the rise.

That data point is reinforced by the fact that average performances on individual PFT events continue to improve. Women and men’s run times have dropped significantly as their numbers on crunches have risen. Men, too, are getting better at pull-ups, averaging 17. And women, who switched to pull-ups from a flexed-arm hang, averaged seven trips above the bar.

Nevertheless, higher standards for a top score, the switch from flexed-arm hangs to pull-ups for females, and the increased reps for individual events, are expected to keep first class PFT numbers lower until Marines adapt to the new standards, McGuire said.

If a 21-year-old male Marine scored a perfect 300 on his PFT last year — which means 20 pull-ups, an 18-minute three-mile run, and 100 crunches — he’d walk away with a 275 this year, since the maximums increased to 23 pull-ups and 110 crunches for his age group. Last year, that Marine was a stud. This year, he’s still near the top, but not the peak.

“Everybody was terrified they would get a second class,” Sgt. Gunnar Naughton, a 24-year-old chemical, biological, radiological, and nuclear specialist, who recently scored a first class on the new PFT, told Task & Purpose earlier this month. “It was a wake-up call for me to train harder for the new PFT, because everyone was talking about it every day.”

Nevertheless, as Marines adjust to the new standards, first class scores are expected to bounce back as they did in the 1990s, when the service instituted a three-mile run for female Marines and more stringent requirements for pull-ups, McGuire told Task & Purpose.

“What we saw at that time was a drop in PFT scores, but over time the scores went up, and we are expecting the same to happen here,” McGuire said. “There’s no evidence to suggest that the same sort of adaptation will not occur.”

Quite a few Marines were already well-prepared for the changes.

“As far as the pull-ups go, I’ve been training for it beforehand, so I was pretty prepared for that part,” Sgt. Kesz Wesley, a water support technician, said in a previous interview with Task & Purpose. “I know a lot of females that were stoked about doing pull-ups because they feel like we have a lot to prove. I might only have to do nine, but I’ll still do 15.”