Imagine getting body-slammed by a man who weighs as much as a grand piano. Think about what that would do … Continued 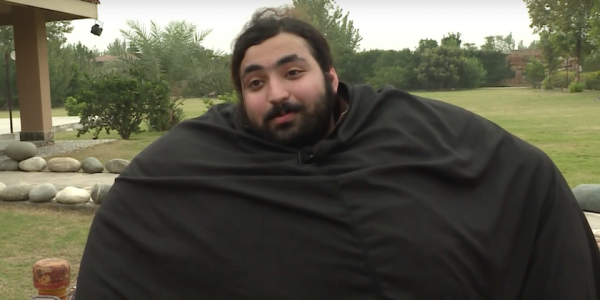 Imagine getting body-slammed by a man who weighs as much as a grand piano. Think about what that would do to your skeleton (shatter it), and your organs (they’d explode). Your final moments on Earth would be spent gasping for breath beneath a sweaty, heaving mass of human blubber and bone.

Terrible as that sounds, if 25-year-old Arbab Khizer Hayat of Pakistan realizes his ultimate dream of competing in the WWE, someone — a professional wrestler, presumably — might suffer such a fate.

Dubbed “Hulk Man,” Hayat weighs a whopping 960 pounds. That’s more than 400 pounds heavier than the late, great Andre the Giant, who was so enormous he wasn’t allowed to serve in the French army, and who tossed his opponents around the ring like Harambe in a daycare.

Of course, you don’t earn a cool nickname like Hulk Man by just being extraordinarily obese. There’s muscle under that fat. Tons of it.

Hayat is a powerlifter. Not only can he beat a farm tractor in a game of tug-of-war, he can also hold a full-grown man over his head with one arm. These incredible feats of strength and more can be seen on YouTube, which has helped him achieve celebrity status in his hometown. Now, he has his sights set on becoming a global superstar.

“My aim is to become the champion,” Hayat, who also dreams of earning the title of World’s Strongest Man, says in one video. “I am thankful to God for giving me this body. It is a matter of time before I get into the world weightlifting arena.”

But God isn’t the only one to thank for Hayat’s superhuman physique. In addition to weight training, Hayat’s stays in fighting shape by consuming a daily diet of 36 eggs, seven pounds of meat, and five liters of milk, among other things. He’s like a human landfill. Forget his capacity for violence. Think about those farts.