Vet ‘Dumbfounded’ After VA Fails To Diagnose His Brain Tumor 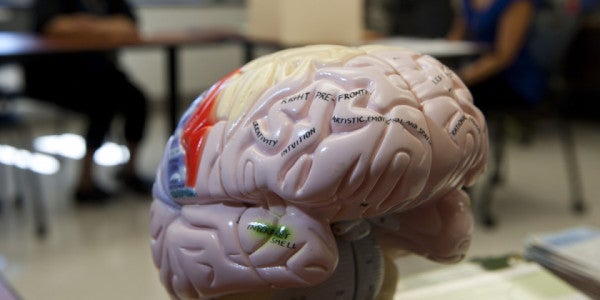 U.S. Marine combat vet Brian Callahan sat in stunned silence. A doctor at Massachusetts General Hospital had just asked him what the VA thought about a brain mass he spotted on Callahan’s MRIs.

“I looked at him and I said, ‘Excuse me?’ ” said Callahan, who was seeing the growth for the first time on the neuroendocrinologist’s screen. “He just kept pointing at it with a mouse on all the scans. He just kept looking at me going, ‘And the VA’s never said anything?’ He was dumbfounded.”

Callahan felt a moment of vindication, then fear, then anger.

“The VA kept telling me that, you know, there’s really nothing wrong,” he said. “I was like, finally, I’m not crazy. This is something that’s really going on … I was horrified.”

The 30-year-old former lance corporal from Dracut had been a machine gunner with 3/8 Marines in Iraq and Afghanistan. He had been rattled by several improvised explosive device blasts, and got a concussion from one. His November 2016 visit to Mass General was the first time the VA’s images of his brain were reviewed by a non-VA doctor.

In the six years Callahan had been going to VA hospitals in Jamaica Plain and West Roxbury for treatment of debilitating seizures, he had never been told anything about the mass, which is benign and located between his pituitary gland and ocular nerve. He said the VA docs always chalked up his symptoms to stress, migraines or vertigo, and told him they couldn’t see anything amiss on his brain.

Callahan — with a faulty diagnosis and a low disability rating — continued to struggle with the seizures, lost his job at a diesel trucking company and went on Mass Health, through which he ended up at Mass General.

Doctors there told him the mass was causing a growth hormone deficiency. They put him on hormone injection and an anti-seizure medication that the VA had never prescribed. Since then, he said his seizures have been much less severe and less frequent, and he’s feeling less irritable and less depressed.

“I can’t believe that if I hadn’t gone to Mass General,” Callahan said, “I would have just kept living my life like this.”

Callahan’s story comes on the heels of a Herald report yesterday on how the Boston VA’s benefits office has been repeatedly criticized by the VA Inspector General’s office for mishandling TBI evaluations over the past six years, failing to assign the proper degree of disability, and in some cases stiffing vets thousands of dollars in benefits.

Callahan’s frustrations echo those of thousands of vets who suffered traumatic brain injuries in Iraq and Afghanistan, said Benjamin Krause, a Minnesota attorney whose work prompted the VA to offer retests to 20,000 vets last year for faulty TBI evaluations.

“VA tends to under-evaluate and under-utilize diagnostic testing, and just happens to miss all of these things, like the tumor, and fails to examine medical evidence that supports that,” said Krause, who is not involved with Callahan.

“The connection between brain tumors and traumatic brain injury is something the VA doesn’t like to talk about,” Krause added. “It’s very expensive to treat somebody with that condition, when it’s connected with a brain tumor that’s operable.”

Pallas Wahl, a spokeswoman for the Boston VA, told the Herald the VA has no record of finding a mass on Callahan’s brain.

“Mr. Callahan’s imaging performed at VA Boston detected no presence of a mass,” Wahl said. “We will review the MGH findings and work with the veteran on a course of care.”

Callahan said he has ample documentation on the mass and its effects, most notably an April 6 assessment from the War Related Illness and Injury Study Center, a VA-affiliated clinic in New Jersey he visited in March.

That letter says Callahan’s MRIs dating back to 2010 “definitely show you have an abnormal brain mass above the pituitary gland,” and that his symptoms — muscle stiffness, nausea, forgetfulness, excessive sleepiness — are “more likely than not linked to the brain mass.” The letter concludes that the mass and “any related symptoms/complications would be expected to be service connected conditions.”

Callahan, a father of two, has a 10 percent disability rating for his brain injury from the VA, on the far low end. He’s deemed 50 percent disabled for post traumatic stress disorder. He and his family receive $1,839 a month in VA disability benefits.

His seizures start with a vision change like blurriness, followed by nausea, intense muscle rigidity and fatigue so drastic he has to sleep immediately for a few hours. He tried to work upon returning from his third deployment in 2009, but the seizures caused him to fall asleep at his desk, and he was worried about having one while driving. He first noticed the symptoms when he became disoriented and didn’t know where he was while grocery shopping with his kids.

Callahan was close to several IED explosions, most severely in 2006 while driving a Humvee in Ramadi, Iraq. The vehicle struck an IED, ripping a hole in the fuel tank and leaving him with a concussion.

“I remember it hit on my left side, and after I looked to my right, and I just remember seeing mouths move, but I couldn’t hear at all,” he said.

Callahan had joined the Marines the year before. After Iraq, he was deployed to Afghanistan’s Helmand Province from 2008 to 2009.

His wife, Alisha, recalls Callahan giving up on the VA doctors after meds they gave him didn’t help, and his frustration over having to recount his entire medical history to a revolving door of doctors.

“The military and the government broke you, they need to fix you, or at least help,” she said. “Why can’t we get outside care? If you want to go see a specific doctor for a thing, why do they make it so difficult to make that happen?”

Even more infuriating, Callahan said, was the reaction of VA doctors after he presented them with Mass General’s findings.

“We would ask why they hadn’t told us about the mass, and they would be like, ‘Well, you know, it wasn’t really life-threatening,’ or, ‘It wasn’t growing, it was benign, we didn’t think it was necessary to report it to you,’ ” Callahan said. “If there’s a mass or anything that I wasn’t born with on my brain, I would like to know.”

Wahl, the Boston VA spokeswoman, said she “can’t confirm or deny what was said” to Callahan, but reiterated that the VA’s records “show no finding of a mass.”

“We inform our patients of all of the findings regarding their care,” she said.

Callahan said he worries about comrades who have never visited a hospital outside of the VA.

“It’s painful to think of the veterans that only know the VA system,” he said. That’s the only health care that they’ve ever been exposed to.”