What Is A Traumatic Brain Injury?

In the last 15 years, the wars in Iraq and Afghanistan have dramatically changed the way we recognize and treat... 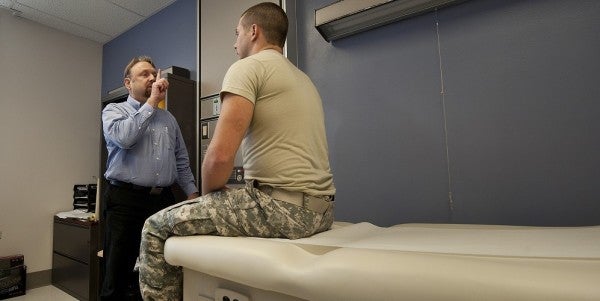 In the last 15 years, the wars in Iraq and Afghanistan have dramatically changed the way we recognize and treat wounds like traumatic brain injuries, or TBIs.

In 2007, the Department of Defense mandated that diagnosing traumatic brain injuries needed to change from being symptom driven, to incident driven, explained Dr. Scott Livingston, the director of education at the Defense and Veterans Brain Injury Center.

Livingston spoke with Task & Purpose about the different types of traumatic brain injuries, their symptoms, and how diagnosing these injuries has changed.

Prior to 2007, a service member had to self-report a traumatic brain injury, said Livingston. This meant that troops had to know what the symptoms were and be able to recognize whether or not they were suffering from one or more of them.

Now the reporting is incident driven, which means that if an individual is in a vehicle collision, rollover accident, or suffers a blast injury, he or she is required to get checked out by a health care provider.

While this new policy has helped many service members receive the care they need, the symptoms of traumatic brain injuries sometimes appear similar to those of post-traumatic stress disorder, which can lead to one injury being misdiagnosed for the other.

When it comes to traumatic brain injuries, Livingston explained that they fall into three categories: mild, moderate, and severe.

Traumatic brain injuries run along “a continuum of injury from mild to moderate to severe,” said Livingston, who noted that a mild TBI is commonly called a concussion.

While blast exposure from improvised explosive devices, indirect or direct fire, can result in traumatic brain injuries, they are not the most common cause of TBIs among troops.

“Most people think, ‘Well, service members in combat, most of their injuries are going to occur from blast exposure or gunshot wounds,’ when in reality most TBIs among active-duty service members are not diagnosed from a combat environment, and most of their causes are motor vehicle collisions, falls, and sports-related activity,” explained Livingston.

The symptoms of traumatic brain injuries vary as well, said Livingston, who broke the injuries and their symptoms down into two groups: mild and moderate to severe.

However, Livingston stressed that mild TBIs can be particularly troubling because a patient is more likely to suffer subsequent concussions after already sustaining one.

“There is definitely an association between sustaining one mild traumatic brain injury or concussion and your risk of sustaining a subsequent one,” explained Livingston, who noted that it’s been well documented in both the military and sports communities. “An unfortunate consequence of the recent conflicts overseas, is the Defense Department learned that same key lesson: that when service members sustain concussions, they’re also at increased risk for subsequent injuries.”

There are a variety of symptoms that can face an individual with a mild TBI, said Livingston, who added that two patients might experience significantly different symptoms, which fall into three categories.

In the case of moderate-to-severe TBIs, Livingston explained that they tend to be more obvious injuries and that it’s not typically a matter of asking a patient if he or she is dizzy or experiencing a headache.

“They’re much easier to diagnose, but require a longer road to recovery and management,” Livingston said. “They’re usually very easy to identify because they typically involve the person either losing consciousness or having a significant alteration in their consciousness where they can’t communicate or their speech is slurred.”

Someone suffering from a mild-to-severe TBI may find their ability to carry out daily functions like walking, eating, or driving severely limited. Because moderate and severe TBIs are easier to diagnose, medical professionals are sometimes more concerned about mild TBIs, as they’re much harder to detect.

The challenge with mild TBIs.

Diagnosing a mild TBI is largely based on the mechanism of injury, meaning how someone was hurt.

If you’re ever in doubt or think that you sustained a concussion, Livingston stressed that you should immediately consult your health care provider.

“If you even remotely suspect that you sustained a TBI don’t second guess it, go seek medical treatment to get it checked out by someone who’s qualified.”

Additionally, for those seeking to learn more about traumatic brain injuries, the Defense and Veterans Brain Injury Center's initiative, A Head For The Future, includes a detailed breakdown of TBI symptoms, common causes, and preventative measures, as well as video testimonials from veterans and service members.