10 Brutal Punishments That Used To Be Legal In The Military

Laws were looser back in the olden days of the U.S. military. If you were a soldier during the Civil … Continued 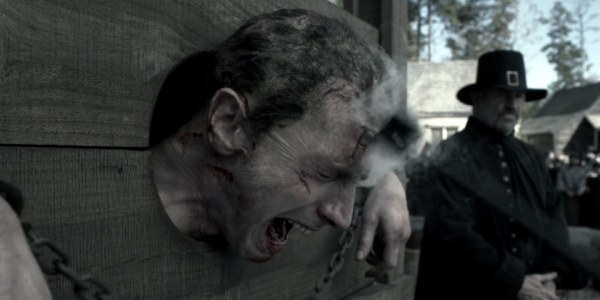 Laws were looser back in the olden days of the U.S. military. If you were a soldier during the Civil War and you screwed up big time, you were looking at a truly painful consequence. It wasn’t uncommon to be flogged or tied up by the thumbs for your misdeeds back then — and it took our country nearly a century to realize that corporal punishment was probably bad for troops and morale. Here are 10 crazy punishments that used to be legal in the U.S. armed forces.

During the Civil War, discipline was a huge problem among the soldiers on both sides of the Mason-Dixon. In order to set unruly soldiers straight, some commanding officers chose the humiliating and painful route of “bucking and gagging.” Under this penalty, the mischief maker would have to sit for long periods bent forward with his hands tied at his shins, his feet tied together at the ankles, and to top it all off — a rod or stick was shoved over the arms and under the knees, and he was gagged with a cloth. The worst part? Minor offenses — like insubordination — earned a troop this unusual punishment.

Log-carrying to the point of exhaustion.

To this day, many branches perform log carries during PT to train strength, endurance, and teamwork. But during the Civil War, log carrying was a form of punishment. Those in breach of minor regulations would be forced to carry a large log around camp until they physically couldn’t stand anymore.

RELATED: 8 Military Punishments That Wouldn’t Fly In The Civilian World »

Civil War commanders didn’t mess around. Minor offenses like straggling, fighting, or drunkenness could earn you an intensely painful ride on the wooden mule. The wooden mule — a narrow rail elevated just high enough so that the victim’s feet couldn’t touch the ground — is considered one of the most cruel torture devices of all time. The accused would have to sit atop the wooden mule with weights attached to his legs until he passed out. Sometimes, the wedge would actually slice through its victim.

During the Civil War, those who messed up were sometimes branded with the first letter of their crime on various parts of the body — usually the forehead — using a red-hot iron, according to American Civil War Society. The letter “C” was given to those showing cowardice under fire, “T” was reserved for thieves, “D” for deserters, and “W” for worthlessness. Painful, embarrassing, and permanent, this punishment probably acted as a deterrent for many troops.

Saunas are nice, but imagine being stuck in a sweatbox for hours without food or water. The U.S. Naval Institute states that during the 1850s a stint in the sweatbox was a punishment used for insubordination and “serious irregularities” among military members.

Outlawed in 1861, flagellation or “flogging” is the beating of the human body with whips, lashes, rods, and similar objects. Troublesome troops were generally flogged on the backs and the bottoms of the feet for minor crimes.

Tying on the spare wheel.

If you were convicted of theft, sleeping on duty, or cowardice during the Civil War, you may face a punishment involving your body being spread-eagle tied to a large wooden wheel. According to the descriptions of Frank Wilkeson, a Civil War soldier, a piece of cloth would be placed around your head so that you couldn’t talk — and sometimes the wheel would be spun so you’d get sick. For moderate punishments, soldiers faced five to six hours tied to the wheel in upright position. If the punishment was severe, the victim would be tied to the wheel horizontally — and he’d have to use all of his strength to keep his weight from pulling hard on the rope.

Tying on the rack.

A crippling punishment involving bondage, Wilkeson says men would beg for death over being tied to the rack. The accused would have all of his weight focused on chest, and his chest would be pressed into the edge of a piece of iron. The victim was gagged because there was always screaming involved. Major ouch.

Tying up by the thumbs.

Another Civil War-era classic punishment was the tying up by both thumbs to a strong tree branch. Soldiers would be left hanging for hours to repent for the minor offences they committed — a punishment that seems to defy both human rights laws and the laws of physics.

According to the U.S. Naval Institute, dousing someone continuously with sea water was used on delinquents and those who showed insubordination as an alternative to flogging. Sounds a bit like waterboarding.