In the fall of 1917, draftees from around the country came together at Camp Greene, North Carolina to form the... 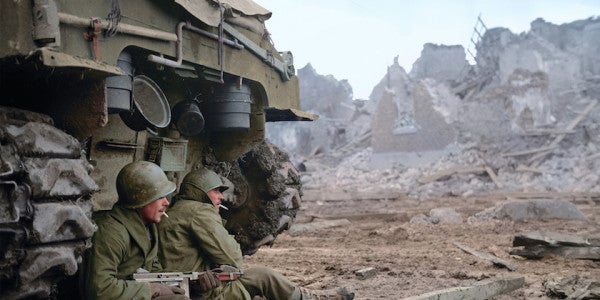 In the fall of 1917, draftees from around the country came together at Camp Greene, North Carolina to form the newly activated 4th Division. These men went on to fight in the trenches of France for the remainder of the First World War. At the time, they were fighting for their country and each other. What they did not know was that they were the founders of an organization whose lineage would span several more wars, and would continue to serve the country 100 years later.

“To War With The 4th” by Martin King , Mike Collins, and Jason Nulton, traces the lineage of the division from its activation in November 1917 to their recent deployments to Iraq and Afghanistan. The book is a mixture of a bird’s eye view of the wars from historians and oral history from veterans of the different battles. The authors say in the introduction that their goal is to “depict the details of some of the battles that the 4th Infantry Division were involved in and then leave it to the veterans to tell you what is was really like for those in the field.”

The authors do a wonderful job of mixing the narrative and the stories of veterans. For instance James Platt, a veteran of World War I, recounts his first experience being on the receiving end of an artillery barrage. He writes:

The advance stopped and everyone hunted for a hole. It is an awful experience to lie with only a bit of ground to protect you and hear those shells coming in, and exploding all around. Each shell sounded as if it were aimed at your person. It is a mystery to me how so many shells can fall all around a bunch of men and yet hit so few.

Many of the stories show how these men were able, in true soldierly fashion, to find humor in some of the worst of circumstances. World War I veteran, John Luedke recounted the time his lieutenant lost his right arm to enemy fire, and remarked, “The Boches haven’t got me — I write with my left hand!”

Two 4th Infantry Division Soldiers move deeper into the woods during the Battle of Huertgen Forest. The division fought in the battle from Nov. 6 – Dec. 3, 1944. The Ivy Division suffered more than 4,000 battle casualties during that time.U.S. Army photo by Sgt. William Smith.

During the Battle of Bulge in World War II, John Capell remembered carrying his Christmas dinner back to his foxhole, and having to chisel out the cranberries that had frozen on his short walk.

In Vietnam, Bill French recounted being told that he was going to be stationed at an overseas base with a tennis court so he purchased a tennis racket. His orders were changed at the last minute, and the 4th Infantry Division sent him to a remote outpost instead. He said that he sometimes still hears, “Hey, lieutenant, what are you going to do with that tennis racket?” ringing in his ears. (In case you were wondering, he still has that tennis racket.)

Readers will walk away from “To War With The 4th” with a greater appreciation for the level of sacrifices that our sons and daughters have made over the years for our nation. For instance, even before the division reached Europe to fight in 1918, it suffered losses. A German submarine torpedoed and sunk a troopship carrying 56 men.

From July to August 1918, the division took 6,923 casualties. During the Meuse-Argonne offensive, Ivy Soldiers had a one-in-three chance of surviving the conflict. In World War II, their odds were not much better.

Related: How The War Overlooked In History Books Changed The Course Of America »

The chapters covering World War II recount the division’s participation in D-Day, the breakout, in the horrible fighting that took place in the Hurtgen Forest, and the Battle of the Bulge. As the authors recount the causality figures for these battles, one cannot help but think about the intensity of fighting that took place, and what would be required of our country if we experienced another war on the level of World War I and World War II.

The majority of the book is dedicated to the world wars, with only 50 pages covering Vietnam, Iraq, and Afghanistan. While the coverage of these three conflicts is a little light, the appreciation of the continued sacrifices made more recently by America’s sons and daughters still comes across clearly.

Finally, this book is the perfect read for those serving today, in the 4th Infantry Division or in other infantry units. The accounts retold in “To War With The 4th” of the soldiers who once wore the Ivy patch, help those of us serving now connect with our past. As a current member of the 4th, I know their stories can inspire us to train harder, sweat more, and push ourselves a little bit farther to keep alive a 100-year tradition of being steadfast and loyal.