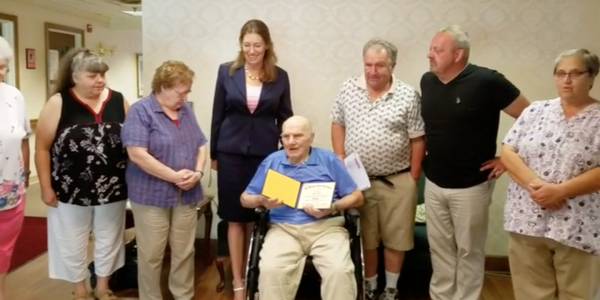 Sgt. Long, who would have graduated from Trevorton High School in 1940, dropped out of school at age 16 to start working during the Great Depression and then join the U.S. Army at age 21 to fight in World War II.

“I feel wonderful,” said Long, during a ceremony at Serenity Gardens outside Kulpmont where he has lived for the last eight years. “I never expected this would ever happen.”

The diploma was made possible by Operation Recognition, which allows Pennsylvania schools to award diplomas to veterans whose high school careers were interrupted by military service during World War II, the Korean War or the Vietnam War. Melissa Blair, of state Rep. Kurt Masser, R-107, presented a citation from the House of Representatives, and Line Mountain Superintendent Dave Campbell presented the diploma.

“I’m very proud,” Long Jr. said. “I looked into getting his diploma because I knew he didn’t get it. He saw a lot of action.”

Long left high school to work in the coal mines and then was inducted into the military in October 1942. He served in the European-African-Middle Eastern Theater during World War II with the 83rd Chemical Mortar Battalion, and sustained injuries in October 1943 and again in January 1944.

Long survived the sinking of British-crewed ship LST-422 at Anzio beachhead off the Italian coast. On Jan. 26, 1944, the ship drifted into a German minefield, hit one of the explosives and sunk, killing more than 450 men.

Long was honorably discharged in October 1945. During his military service, he received the Purple Heart with one oak leaf cluster, the Good Conduct Medal, six bronze stars and one Bronze arrowhead.

Long Jr. said his father rarely talked about his time in the service.

Blair also presented Long with an American flag that flew over the Harrisburg State Capital Building on June 20 in his honor.

Campbell said the the diploma was “long overdue.”

“What an honor and priveledge to give this to a fine young man,” he said.

Long is the last surviving member of 12 siblings. In addition to Ralph Long Jr., he has a daughter, Debra Dressler, of Danville, and three grandchildren.