An Air Force Mechanic Came Up With A Lifesaving System. The Service Paid Him $20

While a “two striper” in the Air Force 60 years ago, Robert Carpenter invented a color-coded system for attaching tractor … Continued 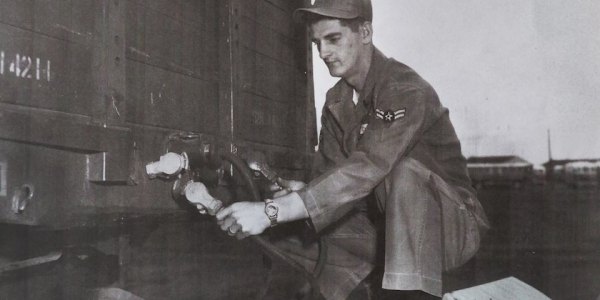 While a “two striper” in the Air Force 60 years ago, Robert Carpenter invented a color-coded system for attaching tractor trailer air-brake connections that's now mandatory equipment for every truck on every American road.

“That's it?” asked long-haul trucker Richard Meade, while stopped Monday at the Travel Center of America in Greenland, where he met Carpenter. “You didn't get any royalties for it?”

Carpenter said he was 22 when he invented the color-coded system for the tractor-to-trailer air brake connections.

Carpenter said his father, Ben Carpenter, was the foreman for Fogg's Express trucking company in Gloucester, Mass., when he told him a story about a boy killed when a truck jackknifed in neighboring Essex, during an accident in which a boy was killed. He said he was 14 when his father told him about the accident and it was caused by the air brake hoses being crossed.

Carpenter said he remembered that tragedy in 1958 while stationed in Japan with the Air Force in the transportation division, with about 100 vehicles in the fleet. One of his jobs was driving visiting dignitaries, who included Bob Hope, Jayne Mansfield, Hedda Hopper, and Gen. Douglas MacArthur, he recalled. He also worked as a military driving instructor and said he was constantly reminding his students that the brake connections had to be crossed or the brakes would lock up.

Carpenter started marking the coils and connections with crayons and reminding the air men to connect red to red, and blue to blue.

“That way you knew you had it right,” he said.

The 43-year Portsmouth resident said he then suggested to Air Force brass that the parts be made color coded, the suggestion was implemented and Air Force contractor Wright Paterson was given the job of making the color-coded parts.

“They enacted it for the Air Force and it's nationwide now,” Carpenter said. “Every tractor trailer on the highway has to have it installed now, it's mandatory.”

He was awarded the $20 and still has a typewritten letter from June 4, 1959 noting the payment as for a “military suggestion award.”

When Carpenter now drives past a truck and sees the coiled color-coded connectors on trucks, his wife Sylvia said she tells him, “Hey hon, there goes your suggestion.”

At the travel center truck stop Monday, Carpenter introduced himself to Texan trucker Michael Lovvorn, who was making a pit stop on his way to Maine. Lovvorn commended Carpenter for his 60-year-old invention, saying if the connectors are all black, “You don't know which is which.”

“I think that's the best thing that ever happened,” he said.

Long-haul driver Richard Meade stopped in Greenland while hauling scrap metal for Shoun Trucking from North Carolina to New Hampshire. He shook Carpenter's hand and said, “It's very important to have color-coded” brake coils, because it's too easy otherwise to connect them improperly.

Carpenter's daughter, Jackie, called the invention “pretty cool” and laughed while joking that if her dad had secured a patent, “We could've had a bigger house.”

Carpenter said he and Sylvia have another daughter Andrea Trout and a son Robert. He said “every now and then” he thinks of another possible invention and, “I know now, if get a better idea, it's going to be patented.”