Before World War II, the Army Air Corps wanted to prove it could contribute to any war effort the United States might encounter — so future Air Force legend Curtis LeMay challenged the Navy to a military exercise to prove to it that airpower was a game changer 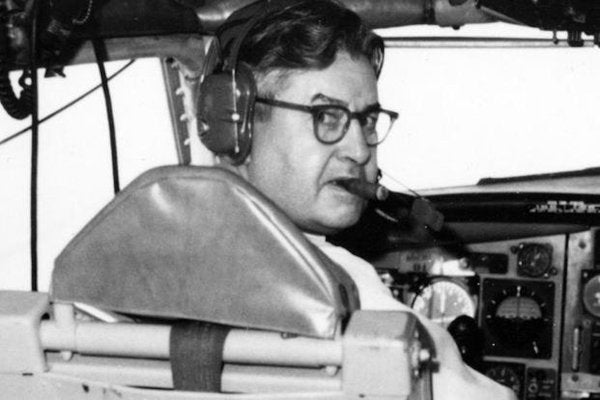 Before World War II, the Army Air Corps wanted to prove it could contribute to any war effort the United States might encounter. So future Air Force legend Curtis LeMay challenged the Navy to a military exercise to prove to it that airpower was a game changer.

The exercise did not go the way anyone — except possibly LeMay — had planned.

In one of the latest episodes of his podcast “Revisionist History,” journalist Malcolm Gladwell takes an in-depth look at the life and legacy of Air Force Gen. Curtis LeMay. Gladwell's show is “about things overlooked and misunderstood,” and a character as complex as LeMay is deserving of the four-episode series “Revisionist History” afforded him.

In the third episode of the series, Gladwell discusses the way LeMay saw the world and the problems within, especially the looming second World War. While today the Air Force legend is best remembered as a terse, cigar-chomping “bomb them back to the stone age” Cold Warrior, it wasn't always so.

By the end of World War II, Gladwell says, everyone in America knew who LeMay was, even if they didn't know their own congressman. But he says the man himself was much further away from the Silver Screen depictions of LeMay-type characters such as Jack D. Ripper in “Dr. Strangelove.”

LeMay had an analytical mind that saw solving a problem as more important than how you solved it — even if the method was morally ambiguous.

Gladwell recalls a story of LeMay's time during the interwar years, around 1937. The Air Corps wanted to practice bombing in a more practical way, far from targets in the desert. It wanted to bomb a target it might have to destroy in the coming years.

In a 1971 speech to the U.S. Air Force Academy, LeMay recounted the story of an exercise that pitted his nascent bomber corps against one of the Navy's battleships, the USS Utah. The Navy would hide the Utah out at sea, and the Air Corps bombers would come find and engage it.

From the start, the Navy didn't exactly adhere to the spirit of the exercise, agreeing to it but determining it would take place in August off the West Coast of the United States.

“In August off the West Coast, there's nothing but fog for a thousand miles out there, and they deliberately picked it for this time, I'm sure,” LeMay told the Academy cadets.

For 24 hours, the Air Corps and Navy would square off. At a random time, the Navy would give the airmen the coordinates of the ship. The airmen would then use dummy, 50-pound bombs filled with water, not high explosives.

But the Navy didn't give out the ship's coordinates until late in the afternoon on the first day and, when it did, the Utah wasn't there. So the YB-17 bombers had to find the ship before they could hit it, all while flying fast and high above the Earth.

Ten minutes before the exercise was due to end, LeMay found the Utah. The Navy believed the airmen would not be able to find the ship in the fog, 60 miles from where it was supposed to be, in the given time frame. As a result, the crew of the Utah made no effort to respond to a bombing exercise.

They were still out on the decks of the battleship, going about their day as if LeMay weren't hovering over them with 50-pound water bombs.

“The Navy was so sure they wouldn't be found that the men were all over the decks!” LeMay said. “Everyone was diving for the gangplanks and hatches.”

They were diving for the gangplanks because LeMay, one of the Air Corps' best navigators, bombed the Utah anyway — from an altitude of 400 feet.

“Revisionist History” doesn't cover the end result of the joint air exercise. The Navy cried foul, saying it could have evaded the bomber attack. So the exercise was repeated the next day. That time, Army Air Corps bombers not only hit the Utah, they were more accurate and hit the ship from 18,000 feet.