Does A Newly Discovered Photo Prove Amelia Earhart Survived Her Plane Crash In The Pacific?

A lost photo may shed new light on the mysterious death of famous aviator Amelia Earhart. The photo, which will be... 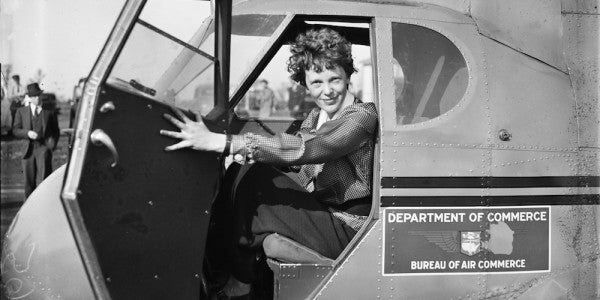 A lost photo may shed new light on the mysterious death of famous aviator Amelia Earhart.

The photo, which will be featured in a new History channel special called “Amelia Earhart: The Lost Evidence,” was discovered in the National Archives more than 80 years after her death.

In it, a woman who appears to be Earhart sits on a dock in the Marshall Islands near to a man who resembles her navigator Fred Noonan.

After becoming the first female pilot to fly a plane across the Atlantic Ocean, Earhart set off to circumnavigate the globe in July 1937. Her plane vanished without a trace during the flight and, by 1939, both Earhart and Noonan were declared dead.

But the new photo, which shows figures that appear like Earhart and Noonan, could challenge the common theory that the plane crashed somewhere in the middle of the Pacific Ocean.

Shawn Henry, former executive assistant director for the FBI, told NBC News that he's confident the photo is legitimate and pictures Earhart sitting on the dock.

“When you pull out, and when you see the analysis that's been done, I think it leaves no doubt to the viewers that that's Amelia Earhart and Fred Noonan,” said Henry. Her plane appears to be on a barge in the background being towed by a large ship.

According to NBC News, the team that uncovered the photo believes that the photo demonstrates that Earhart and Noonan were blown off course. The latest photo could suggest that Earhart was captured by the Japanese military, experts told NBC News.

While current Japanese authorities told the news outlet that they had no record of Earhart ever being in their custody, American investigators insisted that the photo strongly suggests that Earhart survived the crash and was taken into captivity.

“We believe that the Koshu took her to Saipan , and that she died there under the custody of the Japanese,” said Gary Tarpinian, the executive producer behind the History project.