"I think it is accurate to say that we did at that point have a beautiful relationship." 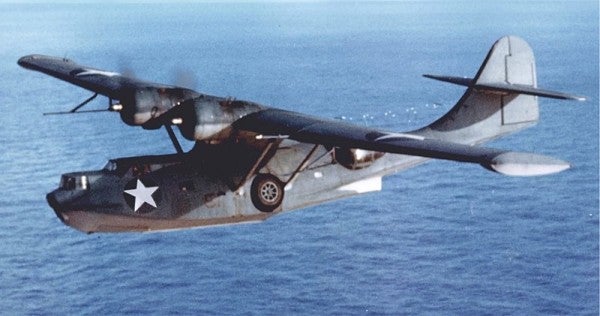 An aircraft on a secret mission for the Russians crashed into the Pasquotank River near Elizabeth City almost 75 years ago. For decades it was kept secret. Elizabeth City locals knew little to nothing about it.

The flight was part of a collaboration between President Franklin Roosevelt and Soviet Union premier Joseph Stalin called Project Zebra. The United States entered a lend-lease agreement to supply the Soviet Union with a modified version of the PBY Catalina, a seaplane with a primary mission of bombing submarines. That Russian model, known as the PBN-1 Nomad, featured more fuel capacity and a longer range.

The Navy produced 185 of the large, heavily-armed aircraft at a shipyard in Philadelphia, according to a book by M.G. Crisci. More than 300 Soviet pilots trained over 18 months in 1944 and 1945 at the Elizabeth City Coast Guard base.

The collaboration was among the last of its kind between the two nations, said Don Pendergraft, director of the Museum of the Albemarle in Elizabeth City, which is gearing up to celebrate the 75th anniversary.

“I think it is accurate to say that we did at that point have a beautiful relationship,” he said. “It was an experiment that went very well.”

The locals, the American aviators and the Russians formed a strong bond while they were here, he said. It is not certain where the name Project Zebra came from. One possibility is in photographs at the time, the Russian Navy wore black uniforms and the American Navy wore white uniforms, Pendergraft said.

The Russian aviators often came into town, said Marjorie Berry, a local historian who has researched the events. They bought large amounts of cloth, cigarettes and French perfume from the local drug store. They could sell it on the black market in Russia where such goods were nearly impossible to find, she said.

She remembers her father's stories of seeing the aviators who could not speak English shopping at downtown stores. He did not know what the Russians were doing in his hometown, but he remembered how polite they were. Ten years ago, the late Greg Gagarin, a translator and avionics specialist, donated copies of documents and photographs from the mission to the museum. Gagarin was instrumental in the success of Project Zebra.

The native Russian came to the United States as a 12-year-old with his parents, said his son Greg Gagarin Jr. He graduated in electrical engineering from the Massachusetts Institute of Technology in 1943 and joined the Navy. He was ordered to report to a seaplane unit assigned to the Pacific. While in Florida preparing to leave, he was ordered to the naval air station in Norfolk. He was told nothing else of the secret mission.

He roamed around the base for three days before he found out what he needed to do next, Gagarin said of his father.

“They told him to get on a bus and go to Elizabeth City,” he said.

Once there, he saw the Soviet stars on the planes and was assigned his duties — translating complicated manuals and instructions from English to Russian.

Gagarin would sit on a pillow between American and Russian aviators on the floor of the aircraft while it was in flight. The Americans would give a command and Gagarin would translate over the engine noise, his son said. In later years, his father spoke about the mission to American and Russian audiences. The Russians offered to build a statue in 2018 honoring the collaboration and erect it on the Elizabeth City waterfront, but the City Council declined the offer.

The crash came near the end of the program.

On Jan. 11, 1945, a Nomad, heavily loaded with American goods, took off in the darkness from the Coast Guard base out over the Pasquotank River. It was piloted by a member of the Royal Canadian Air Force and carried eight other aviators.

Not long after becoming airborne, a part of the plane struck the water and it crashed into the Pasquotank River, killing five people aboard. The pilot and three others survived. The pilot later acknowledged he lost his bearings after following safety lights on the ground and then switching to instruments for night flying. The extra weight of American goods in the aircraft may have been a factor, Pendergraft said.

The Museum of the Albemarle will honor those killed in the crash at a 2 p.m ceremony on Jan. 11 in Elizabeth City. The commemoration will include the attendance the Russian ambassador to the United States, Anatoly Antonov; Russian students and elected officials. Locals will perform a reenactment with some of main characters of the time.