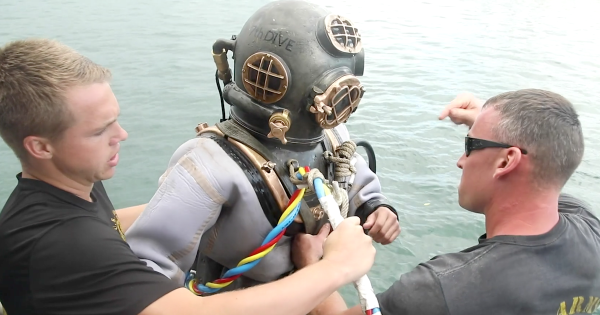 The divers with the 7th Engineer Dive Detachment donned vintage Mark 5 hardhats — the only two still certified for use — and lead boots that along with the drysuit weighed about 200 pounds, to walk across the deck of the sunken battleship and descend 22 feet into gun turret 4 to carefully place Bruner's ashes in one of the deepest spots in the wreck.

Dozens, if not hundreds of divers, wore very similar gear in the salvage of damaged ships in Pearl Harbor during the war.

Just three Arizona crew members remain alive, and they have indicated they want to be buried in family graveyards, meaning Bruner likely will be the last ever to be interred on the famed battleship.

More than 900 men remain entombed on the ship from the huge explosion and fireball that engulfed it 78 years ago, while Bruner is the 44th survivor to be interred inside since 1982.

“I think it was a really fitting tribute and I think it's an interesting way to kind of close out the last of the interments — to have it done not only with the ceremony that we normally do, but to have historic hardhats like it would have been during the salvage in World War II,” said Brett Seymour, deputy chief of the National Park Service's Submerged Resources Center.

The U.S. Naval Undersea Museum said the Mark 5 dive rig was used by the Navy for deep sea and salvage diving from 1916 through the early 1980s.

“With its iconic copper helmet, the Mark 5 is the best known and most recognizable of the Navy's diving systems,” the museum said.

Spc. Julio Melendez, a 21-year-old diver with the Army dive detachment based at Hickam Airfield, was given the honor of placing Bruner's urn in its final resting place deep within the Arizona.

“It was historical. I was left speechless, honestly,” said the El Paso man. “It was a very in-the-moment experience. Just kind of taking it all in and realizing what we were doing and the history that's being made and remembering Lauren Bruner and everything that he had done.”

Seymour, who was one of the divers in the water, said “we've never done an interment with hardhats for sure” in the history of the program before Saturday's event.

More than 200 invited guests attended the sunset ceremony aboard the USS Arizona Memorial for Bruner, who lived in La Mirada, Calif.

His brother, Chet Danforth, 95, and caretakers helped hand the urn to a group of park service, Navy and Army divers just off the memorial.

Melendez and another Army diver in a Mark 5 hardhat and a diver in commercial dive gear walked across about 200 feet of the sunken Arizona to reach the stern and blackened cylindrical hole where the 14-inch guns of turret 4 once rotated.

After a handoff of the urn, the two Army divers, with umbilical lines tracing back to a Navy ship on the opposite side of the memorial, topped a lip on the turret and slipped into semi-darkness created by stirred-up silt and a setting sun.

Scott Pawlowski, curator for the Pearl Harbor National Memorial, and also one of the divers that day, said a line marks the route to a 6-foot crack in the steel 22 feet down in the turret that's used for the placement of ashes.

“We slide the urn into the hole until we get behind the I-beam that is part of the construction and we can feel the urn drop into the ship,” he said.

“The reason that crack was chosen was because of the belief that it gets the urns to the deepest part of the ship,” Pawlowski said, adding there is the symbolic notion of closeness to the entombed men of the Arizona.

Pawlowski said it “was a combination of enthusiastic divers and a very interested family” that led to the World War II-era diver sendoff for Bruner.

Melendez said four of the vintage hardhat suits in the Army inventory were sent from Virginia. Two were certified for use. One dive helmet on static display was used in the salvage effort after the Pearl Harbor attack.

Familiarization dives and a rehearsal dive were conducted leading up to the interment using the gear that included vintage lead and leather boots and newer neoprene drysuits.

“In retrospect, it's very historical and super-cool, but it's kind of uncomfortable,” said Melendez, who's been a diver for about two years. “It's super heavy and it's kind of amazing to think that it took so long to kind of upgrade it.”