The Army Is Finally Getting A Museum. Here’s What’s Inside

The United States’ oldest fighting service is also the last one to get its own museum. And for its first … Continued 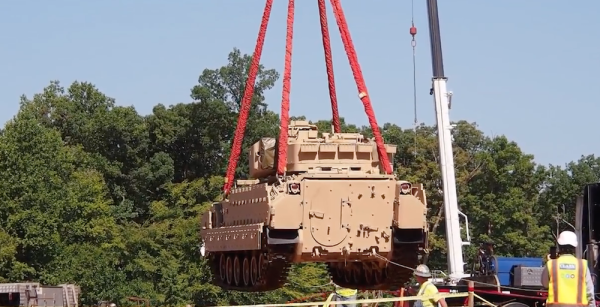 The United States’ oldest fighting service is also the last one to get its own museum. And for its first museum display, the Army has chosen to represent its storied, 242-year history with a 25-ton curio from one of its most recent conflicts.

An M3 Bradley Cavalry Fighting Vehicle used to transport soldiers in 2003, the first year of the Iraq War, is the first artifact to be installed in the National Museum of the United States Army.

Here's a glimpse of the M3 Bradley Cavalry Fighting Vehicle being installed into its new home! https://t.co/5s3VBWN51h

The museum, expected to open in 2019, will honor the branch, born June 14, 1775— the oldest U.S. military service, and the only one without a national museum.

“This museum will give the American people a look at their history through the eyes of the men and women who have served this country selflessly since the 1600s,” retired Gen. Gordon Sullivan, the Army Historical Foundation chairman and a former Army chief of staff, told NBC Washington.

The National Army Museum “will be located over 80 acres at Fort Belvoir, VA, less than 30 minutes south of our nation’s capital,” according to its website, ArmyHistory.org.

Through its Twitter account, the museum is streaming major installations live. The second item slated for installation will be a Sherman tank on Aug. 3.

The Sherman tank being installed tomorrow is coming all the way from @FortBenning. Watch the installation live on our facebook page.

Other artifacts featured will be selected from the more than 15,000 pieces housed within the Army art collection, including 30,000 relics, documents, and images.

“The vast majority of these rare and priceless artifacts have never been seen by the American people,” the site says. “The Museum will welcome an estimated 750,000 visitors every year.”