A Medal of Honor recipient who was later called a “one-man Marine Corps” died on Wednesday at the age of... 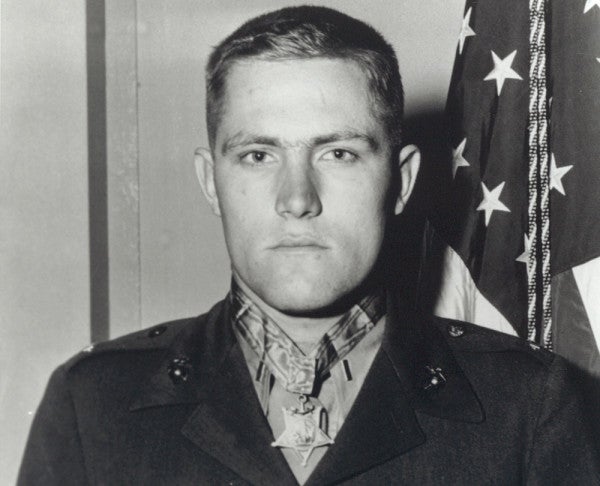 A Medal of Honor recipient who was later called a “one-man Marine Corps” died on Wednesday at the age of 92, the Idaho Statesman reported.

Art Jackson, who served with the 3rd Battalion, 7th Marines, 1st Marine Division, was one of 28,000 Marines who took part in the two-month long of Battle of Peleliu during World War II.

On Sept. 18, 1944, as Jackson's platoon was pinned down by heavy Japanese fire, he ran forward by himself toward a pillbox holding about 35 enemy soldiers, according to his Medal of Honor citation.

“Pouring his automatic fire into the opening of the fixed installation to trap the occupying troops, he hurled white phosphorus grenades and explosive charges brought up by a fellow marine, demolishing the pillbox and killing all of the enemy,” the citation said.

But he didn't stop. He charged and took out 11 more Japanese pillboxes singlehandedly, eventually killing 50 enemy soldiers. He was called a “one-man Marine Corps” in a book that was later written about the battle.

Watch Jackson describe his actions for which he was awarded the Medal of Honor:

“By his cool decision and relentless fighting spirit during a critical situation, [Jackson] contributed essentially to the complete annihilation of the enemy in the southern sector of the island,” the citation said.

Jackson was wounded once during Peleiu and a second time during the Battle of Okinawa, for which he also received two Purple Hearts, the Statesman reported.

“Art Jackson was a true American hero,” Rocci Johnson, a family friend, told the Statesman. “He was from the Greatest Generation. If it wasn’t for men and women like him, it would be a very different world … We owe a lot to his dedication and hope that his legacy will serve as an example for all of those who are currently fighting for freedom.”

In 1961, Jackson, then a Marine captain, was stationed in Guantanamo Bay when a Cuban spy working for Castro lunged at him with a knife. Jackson drew his sidearm and shot him dead. He then tried to hide the body, but it was later discovered.

Jackson was then arrested and later kicked out of the Marine Corps.

Read the full piece from the Idaho Statesman here.