More than 600,000 men and women worked on the Manhattan Project nationwide, but only one of them bore witness to all three major atomic blasts in 1945 that led to the end of World War II 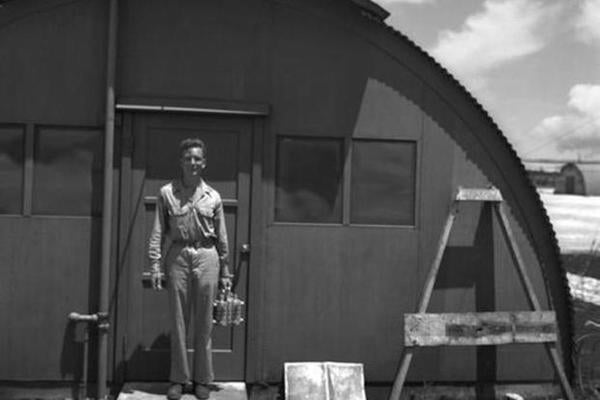 More than 600,000 men and women worked on the Manhattan Project nationwide, but only one of them bore witness to all three major atomic blasts in 1945 that led to the end of World War II.

Lawrence Johnston was aboard B-29 Superfortress bombers tending to instruments measuring the power of the world's first nuclear explosions in the “Trinity” test in New Mexico, as well as for the bombs dropped on Hiroshima and Nagasaki, which prompted Japan's surrender and brought the war to a close.

As the nation approaches the 75th anniversary of Japan's capitulation on Aug. 15, 1945, when Emperor Hirohito went on the radio to announce that the time had come to “bear the unbearable” and accept the allied terms for unconditional surrender, Johnston's story is unique.

When the bomb dropped on Hiroshima, Japan, on Aug. 6, 1945, his first reaction on seeing the blinding flash and the mushroom cloud was: “Praise the Lord, my detonators worked.”

He was well aware of the immense destructive power and carnage that the bomb would inflict on the city after witnessing the Trinity test but — like most of the scientists at Los Alamos who created the weapon — saw its use as the horrific means to achieve the final end to a war that was causing far more killing.

The final death toll from the Hiroshima bombing may never be known, but estimates say at least 80,000 were killed in the initial shock waves and firestorm, some vaporized and leaving only silhouettes to their existence on walls. About 135,000 died overall.

Johnston said he knew that, “All those people that were going to be killed — I was praying for them. … I was praying that God would help us bring an end to the war.”

Johnston reflected on his role in ushering in the “Atomic Age” in an oral history for the National World War II museum in New Orleans before he died at age 93 in 2011 at his home in Moscow, Idaho.

In a statement, Rob Wallace, of the WWII Museum's education team, said that Johnston “was the only person to see all three atomic detonations in 1945. He was at the Trinity Test, and he was part of the scientific team accompanying deployment over both Hiroshima and Nagasaki.”

He studied physics at Los Angeles Community College and the University of California at Berkeley, and received a Bachelor's degree in 1940 from Berkeley, then a center for the study of atomic structure and the transformation of matter into energy.

It was at Berkeley that he came in contact with the brilliant polymath and eventual Nobel laureate Luis Alvarez, who would become his mentor, Wallace said.

In the years after the war, his biggest critic for taking part in the use of nuclear weapons was his own daughter, Mary Virginia, Johnston said.

“My daughter was a pacifist, and she gave me a lot of criticism,” he said. “I got a lot of flak from her, but we get along very well together now.”

Mary Virginia “Ginger” Johnston would become pastor of a church in Oregon, he said.

After graduating from Berkeley in 1940, Johnston said he expected to continue his studies there for a doctorate under his mentor, but Alvarez was called East to the Massachusetts Institute of Technology Radiation Laboratory to work on ground-controlled approach radar.

He brought Johnston along for his expertise in electronics, which Alvarez surmised from one of their conversations, Johnston said.

At one point, Alvarez asked him, “What do you like to do?”

Johnston said he replied, “Oh, I like to play with radios,” and that was enough for Alvarez.

Alvarez was later called to Los Alamos to work with the fractious group of great minds and even greater egos brought together by theoretical physicist J. Robert Oppenheimer, director of the Manhattan Project.

The project was named for the office building that still stands at 270 Broadway in Manhattan, across the street from City Hall, where the original planning began.

Alvarez again summoned Johnston to come work with him. Upon arriving in the New Mexico desert, “I had no idea what they were doing except that it must be important to the war effort,” he said.

Alvarez “put me to work on detonators,” Johnston said, seeking to devise a precisely timed implosion of conventional explosives that would trigger the nuclear core of the bomb to a chain reaction.

Three B-29 flights into history

In the early morning hours of July 16, 1945, the world's first atomic bomb had been hoisted atop a tower in in what was then the U.S. Army Air Forces Alamogordo Bombing and Gunnery Range, now part of the White Sands Missile Range, for the test that Oppenheimer christened “Trinity.”

Oppenheimer was in a bunker about five miles away and had ordered all others beyond a select few to be at least 25 miles away, including Johnston and Alvarez. Nobody knew for sure how powerful the blast would be.

Alvarez was “mad as socks about that,” Johnston said. He convinced Oppenheimer to let him commandeer a B-29 and took Johnston with him to work instruments measuring the force of the blast.

“We saw this big flash, and then we saw this column rising, the first mushroom cloud,” he said. “I had developed all of the recording equipment that recorded the pressure wave.”

Then, it was off to the island of Tinian in the Northern Marianas chain with Alvarez to prepare for the bombings of Hiroshima and Nagasaki.

Johnston was again aboard the Grand Artiste when another atom bomb called “Fat Man” was dropped on Nagasaki on Aug. 9, but Alvarez did not make that flight.

“Alvarez said, 'You will be the only one who saw all three of the A-bombs go off.' That made me oh so happy,” Johnston said.

He returned to the States and completed his Ph.D. in physics in 1950. He would become an associate professor at the University of Minnesota in Minneapolis and later worked at the Stanford Linear Accelerator Center as head of the electronics department.

He was a professor at the University of Idaho in Moscow, Idaho, until his retirement. He died in Idaho in 2011.

Aboard the Grand Artiste on Aug. 6, 1945, Johnston and Alvarez had a 1,300-mile flight ahead of them from Tinian to the target area over Hiroshima

“On the long flight to Japan, I figured, 'Man, I don't know how big this explosion is going to be,'” Johnston said. Alvarez was asleep in the tunnel leading from the cockpit to the tailgunner's position, he said.

“Finally, I decided I better talk to him” about the recording equipment. He said, 'I don't care. Set it up wherever you think,'” Johnston said.

On the way back to Tinian, Alvarez sought to collect his thoughts on the immensity of what they had just witnessed. He jotted them down in a letter to his young son dated Aug. 6 — “10 miles off the Jap coast at 28,000 feet.”

“The story of our mission will probably be well known to everyone … but at the moment, only the crews of our three B-29s and the unfortunate residents of the Hiroshima district of Japan are aware of what has happened to aerial warfare,” Alvarez said in the letter, now in the National Archives.

“What regrets I have about being a party to maiming and killing thousands of people are tempered with the hope that this terrible weapon we have created may bring the countries of the world together and prevent further wars,” he wrote.