Uncle Sam wants you. You already knew that. But for a brief time, he also wanted your favorite flying Austin,... 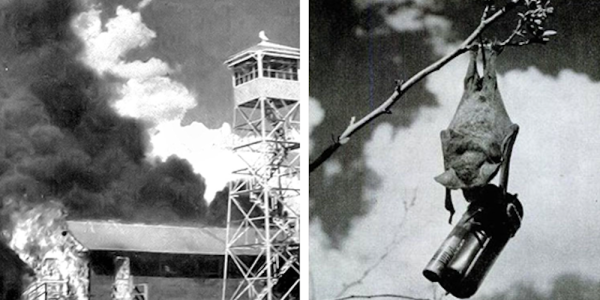 Uncle Sam wants you. You already knew that. But for a brief time, he also wanted your favorite flying Austin, Texas, mascot.

According to the Washington Post, the U.S. military once recruited hundreds of Mexican free-tailed bats in a plot to blow up Japanese cities during World War II. These bats (the largest urban colony of which famously lives in present-day Austin) were meant to carry bombs and roost in Japanese buildings, where they would, well … explode.

This is the part where you take a breath and collect yourself. You will need the oxygen for your brain. Go for a walk. Text your friend back. Things are about to get wild. Best to get your affairs in order. Because here are some of the other batty details about Project X-Ray (I know, right?) in the Post’s story:

The plan got rubber-stamped by President Franklin D. Roosevelt.

The whole scheme was cooked up by a Pennsylvania dentist.

Special bat-sized bombs had to be invented, using parts from a factory owned by Bing Crosby.

Finding it difficult to control the winged wonders, the military tried refrigerating them to make them sleepy; they either woke too late and fell to earth like bat-bricks, or woke too soon and escaped.

The whole scheme ended with the bats and their bombs set most of a New Mexico military base on fire, including making a general’s car go “boom.”

The Post’s whole tale is worth examining in detail. And since time is a big ol’ loop, the newspaper also reported that the U.S. military is once again interested in the military application of bats. Their present-day target? Russian bioweapons.