As a kid, I spent a lot of time at the beach with my grandparents in Ocean City, New Jersey.... 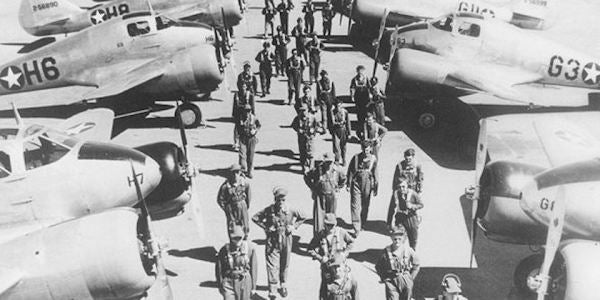 As a kid, I spent a lot of time at the beach with my grandparents in Ocean City, New Jersey. I have fond memories, many of them of my grandfather humming something while working or cooking. Once I asked him what song he was singing, and he answered “the Air Corps song.”

During World War II, my grandfather was a bombardier aboard a B-24, and was proud of his service. When he sang the song, the words were, “Nothing can stop the Army Air Corps.” Since 1947, the lyrics have been “U.S. Air Force,” but for my granddad it was always the Air Corps. I grew up thinking that was what it was supposed to be, but what I didn’t know was that even when he was serving, it wasn’t known as the Air Corps. In fact, the Air Corps didn’t exist after June 20, 1941 when the name of the service changed to the U.S. Army Air Forces. Even during my own 20 years of service, I didn’t realize the Air Corps became the Army Air Forces just before we entered the war.

Since aircraft were brought into the military in 1907, American air forces have gone by numerous names, and were actually under the Signal Corps for most of World War I. The aviation section of the Signal Corps became the U.S. Army Air Service just before the end of the war, but was largely demobilized at the conclusion of hostilities. What was left continued as the Army Air Corps starting in 1920, and with the help of firebrand Gen. Billy Mitchell, focused on innovations (such as air refueling) and the development of all-metal planes and bombers.

Related: ‘Beyond The Call’ Captures An Airman’s Heroic Covert Mission To Rescue POWs During WWII »

By 1940, it was clear that the United States would become involved in World War II, so President Franklin Roosevelt began rebuilding the military. Aircraft were produced by the thousands, many destined for Great Britain to aid in their defense against the Nazi onslaught during the Battle of Britain. The rest would be produced and sent to military airfields across the nation so pilots and aircrews could begin training. In June 1941, the Department of War knew that the Air Corps, which had been relatively small, could not function very efficiently as an Army combat arm (much like the infantry). Partly to allow American air forces greater autonomy, and partly as a concession to the separate-service proponents, the Army created the Army Air Forces.

To talk about the U.S. Army Air Forces is to talk about World War II. Its creation was a big deal. With greater independence, Army Air Forces leadership could better grow strategic bombing capabilities — Roosevelt’s main focus — and manage its assets, which in 1943, reached a peak of 2.4 million people, 80,000 aircraft, and 783 installations. Within a year of its creation, the Army Air Forces also got a seat on the Joint Chiefs of Staff, giving it a voice equal to that of the Army and Navy.

The reorganization of air forces had a profound effect on the war, and indeed the future of warfare. With a larger degree of autonomy, the Army Air Forces was able to develop the B-29 bomber, P-51 fighter, and jet engines. Additionally, the murky lines of authority in the Army Air Corps were eliminated, with overall command and a large “air staff” granted to chief of the Air Forces, Gen. Henry “Hap” Arnold. Under Arnold, the Army Air Forces developed solid doctrine, particularly for strategic bombing. A fairly new concept, bombing of targets from the air came of age during this period, kicking off with a bang when then-Lt. Col. Jimmy Doolittle famously launched 16 B-25 bombers from an aircraft carrier to bomb Japan. While not a significant military victory, the April 1942 Doolittle Raid served as a lightning rod for American morale, and was a crushing blow to the Japanese, casting doubt in the minds of its citizens on their leaders’ ability to defend their country.

Later in the war, tactics used in the aerial bombardment of Nazi Germany and the Japanese home islands matured. The Army Air Forces learned the pros and cons of daylight and nighttime missions, and after staggering casualties, developed doctrine that included the use of fighter escorts. The establishment of air superiority over hostile territory, destruction of industries and war making capabilities, and the negative impact on enemy morale arguably won the war for the Allies.

The greatest impact, however, was the Army Air Forces’ participation in the Manhattan Project and the devastating atomic bombing of Japan, which ushered in the nuclear age. It was a B-29 — the service’s newest bomber — that changed history on Aug. 5, 1945. Col. Paul Tibbets piloted the aircraft, named “Enola Gay” after his mother, which carried a gun-type atom bomb codenamed “Little Boy.” At 8:15 am, the city of Hiroshima was leveled in atomic fire, hotter than the surface of the sun. Nagasaki was destroyed a few days later by another bomb, codenamed “Fat Man,” which brought Japan to its knees and quickly ended the war.

The Army Air Forces would be a fairly short-lived service. Two years after the conflict ended, air power advocates within the Army successfully lobbied for a separate air service, even though the Army Air Forces essentially functioned as one already. The National Security Act of 1947 created the Department of Defense, the chairman of the Joint Chiefs of Staff, National Security Council, Central Intelligence Agency, and of course, the United States Air Force. In its nearly 70 years of existence, the Air Force has been decisive in numerous conflicts and its airmen are among the best-trained military personnel in the world.

But what is the Army Air Forces’ legacy? It has many, not the least of which is the powerful story of the Tuskegee Airmen — the first black combat aviators, who proved themselves in European skies in World War II. But perhaps one of the greatest is Brig. Gen. Paul Tibbets IV. Tibbets attended the Air Force Academy, graduating in 1989 to follow in his grandfather’s footsteps. He is a command pilot with almost 4,000 hours in the Air Force’s only three bombers — the B-1, B-2, and B-52 — and is now the wing commander at Whiteman Air Force Base, Missouri – the home of the B-2.

Paul, Jr., the famous pilot of the Enola Gay, would be proud.