In one week of that career, naval aviator Chuck Sweeney earned three Distinguished Flying Crosses, awarded for "heroism or extraordinary achievement in aerial flight," for his actions over Vietnam. 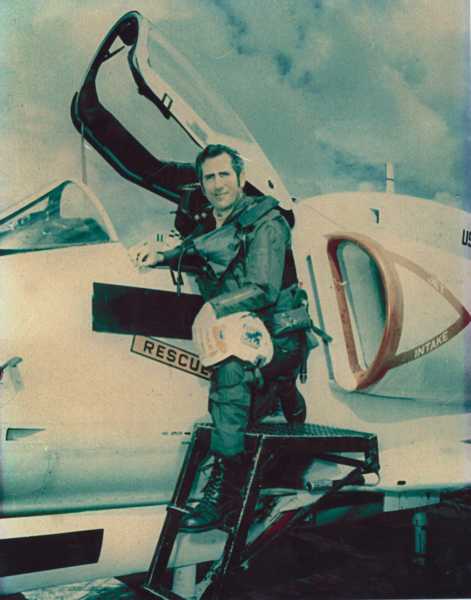 Chuck Sweeney left the Navy as a commander in 1980, after a 22-year pilot career that included 200 combat missions, 4,334 flight hours, and 757 carrier landings.

In one week of that career, Sweeney earned three Distinguished Flying Crosses, awarded for “heroism or extraordinary achievement in aerial flight,” for his actions over Vietnam.

Sweeney, president of the national Distinguished Flying Cross Society, spoke with Insider about the unusual way he got his start as a carrier pilot, his time fighting in Vietnam, and the week he was awarded three DFCs in September 1972.

Despite his awards, “I'm no different than most other people,” Sweeney said in the 2017 documentary “Distinguished Wings over Vietnam.”

“I just happened to be at the right place at the wrong time.”

“I have a lot of friends who said they were interested in flying early on, and they always wanted to be a pilot,” Sweeney told Insider. “I really didn't. I wasn't against it. I just never thought about it.”

But after he was drafted in 1958, he decided to join the Navy “and see the world.”

His first assignment took him to Naval Air Station Patuxent River in Maryland as an aeronautical engineer — not exactly one of the exotic destinations Sweeney had in mind.

While at Patuxent River, Sweeney got to know some of the test pilots, who took him up on flights.

One test pilot in particular convinced Sweeney that not only did he want to fly; he wanted to be the best of the best — an aircraft carrier pilot, or “tailhook.”

Sweeney first flew the S-2E anti-submarine aircraft, then volunteered to be an attack pilot, flying the A-4 Skyhawk, while he was earning a master's degree in aeronautical engineering at the Naval Postgraduate School in Monterey, California.

“They were losing a lot of pilots,” in Vietnam, Sweeney told Insider. “They were being killed or captured.”

After combat missions in Vietnam and Laos, Sweeney trained pilots in Lemoore, California. But his shore duty didn't last long.

In July 1972, he was sent to the USS Hancock to replace Cmdr. Frank Green, the executive officer of Attack Squadron 212, who was missing in action after his aircraft was shot down.

“The next morning, I was flying my first strike against North Vietnam,” Sweeney told Insider. “Back in those days, things were happening fast.”

During the week of September 6, 1972, Sweeney's actions in combat earned him three Distinguished Flying Crosses.

Sweeney's first DFC came after a high-stakes rescue in the waters just off North Vietnam.

Lt. William Pear's aircraft was hit and landed in the treacherous territory, and Sweeney coordinated his rescue from the cockpit of his A-4, even as he himself was under anti-aircraft fire.

“Most of the time, if you landed over North Vietnam, 99 times out of 100, you'd be captured,” Sweeney said. “But we got him back and kept him out of the Hanoi Hilton.”

Pear was the last A-4 pilot to be rescued during the Vietnam War, Sweeney said in an interview for the Distinguished Flying Cross Society Oral History Collection in 2005.

Days later, Sweeney led aircraft from the Hancock in a strike and was awarded his second Distinguished Flying Cross.

“We had 35 aircraft going after a target in North Vietnam, and I was leading the whole strike,” he said.

“I had planned numerous strikes and led them in training, but this was the real thing,” Sweeney said in a 2005 oral interview in the book On Heroic Wings.

They successfully completed the strike but met frightening resistance. North Vietnamese MiGs took off and headed toward Sweeney's strike group, although they eventually stood down, and the group was under heavy anti-aircraft fire.

“For doing the job that I was trained to do I was awarded my second DFC,” Sweeney said in On Heroic Wings.

Sweeney's third DFC came the next day, when he led three other aircraft in an alpha strike on the outskirts of Hanoi.

On a strike that close to the North Vietnamese capital, “You knew the defenses were going to be heavier,” Sweeney said.

Sweeney and other pilots dodged North Vietnamese surface-to-air missiles (SAMs) as they headed to their target, a major railyard.

“The rule was, to avoid being hit, when [the SAM] looked like a flying telephone pole, you made this maneuver around it, kind of away from it,” Sweeney said.

Sweeney managed to avoid the missile but got separated from the rest of his group and caught up just as they were preparing to attack their target.

Sweeney's group hit a loaded train and avoided even more anti-aircraft fire as they headed back to the USS Hancock.