A Glacier Recovery Mission Delivers The Ghosts Of Fallen Troops

Editor’s Note: This article by Amy Bushatz originally appeared on Military.com, the premier source of information for the military and veteran community.... 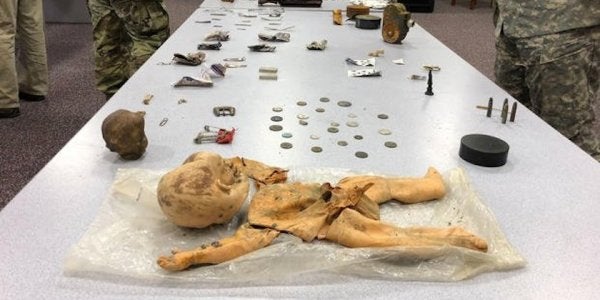 JOINT BASE ELMENDORF-RICHARDSON, ALASKA — It's a sacred annual mission: a group of mortuary affairs recovery experts arrives each June at a glacier high in Alaska's Chugach mountain range to continue the hunt for the remains of 52 troops killed in an Air Force transport crash 66 years ago.

The C-124 was carrying 42 airmen, eight soldiers, one sailor and one Marine when it crashed into Mount Gannett on Nov. 22, 1952 as it traveled from McChord Air Force Base, Washington to what is now Joint Base Elmendorf-Richardson, Alaska. Winter had descended on the treacherous mountain range, and no remains or wreckage were recovered at the time.

But in 2012 the wreckage was spotted by an Army National Guard crew on a routine training flight. About twelve miles from the crash site, the wreckage — including artifacts, airplane piece, and human remains — had been pushed out of the mountain by the ever moving and changing Colony glacier.

Since then, mortuary affairs crews and other Army volunteers from both this base and Fort Wainwright, near Fairbanks, have annually spent a portion of each summer flying into the glacier to conduct recovery operations.

But glaciers are tricky terrain. The window to work safely on the Colony glacier must be perfectly sandwiched between the snowpack clearing in early June and warming temperatures by mid-July that can cause an increase in large, sudden and dangerous glacial cracks called crevasses opening across the recovery area. Work typically starts in early to mid-June and is wrapped up for the year by early July.

This year the team was ready to work on the glacier for 21 days, but had to stand down for four days due to bad weather, said Air Force Capt. Victoria Martinez, who came from Dover Air Force Base, Delaware to lead this year's operation.

New human remains from the crash and personal effects are collected each year by the crew, Martinez said. Since the first recovery mission was sent in 2012, the remains of 38 individual service members have been identified and returned to their families.

It's finding the personal items that really hits home for the team, Martinez said. Dog tags, uniform pieces or patches and items from luggage including a bottle of deodorant, a child's baby doll and even wedding bands were among the items the recovery crew found this year.

At the end of the mission, many of the found items are laid out so those who supported the mission can view them. But any items that include the names of those lost are kept behind closed doors until after the family can be notified that a new item has been found, Martinez said. This year, items belonging to about 10 different individuals were located, not including the individual wedding bands.

Finding wedding bands is like locating a needle in a haystack or, in this case, a glacier. And snagging such a small item before it falls down a crevasse is really a matter of luck, she said.

“Two of the rings I saw them find, and it was on the side, wedged in ice on the side of the crevasse, and it was only a matter of hours before it would've melted out and been lost,” Martinez said. “To find three in one year like this was just surprising. When you're on your hands and knees and you're searching through millions of rocks on a glacier and you come across a ring it's really exciting. It's the smallest thing that we can maybe associate with someone.”

Because glaciers advance or retreat over time, new items from the wreckage are pushed to the surface each year. An Army National Guard crew recons the glacier each year to spot new wreckage areas. And then the crews get to work.

But like everything with glaciers, the future of the recovery operation is unclear. The wreckage is currently less than a mile from the glacier's toe, where it ends in Lake George. Before the next recovery season, no new items could be pushed out, or the entire site could instead be swallowed into the glacier.

“It shows that it's a race against time. The ice will expose what it exposes and it's up to us to get it at the right moment,” she said.

Still, recovery officials said they likely have up to five more years of work ahead of them before they've completed their efforts.

Next year Air Force Capt. Brian Scallion will lead the recovery team, he said. Although this was his first year on the Colony glacier, he's been a part of the recovery effort before, first as a member of an honor guard team conducting a burial at Maxwell Air Force Base, Alabama for remains found during a past year, and then accompanying remains headed back from the glacier via his current duty station at Dover.

“It's been kind of cool to see all three things that we do at the mortuary to take care of the fallen and bring something back to the families,” he said. “It excites me knowing that there's next year, that there's still stuff under the ice next year… We're having a huge impact on the families from 66 years ago who are finally getting something.”