Despite the important role gliders played in transporting men and equipment during the D-Day invasion of Normandy, the contributions of North Carolina's Laurinburg-Maxton Air Base have been largely forgotten 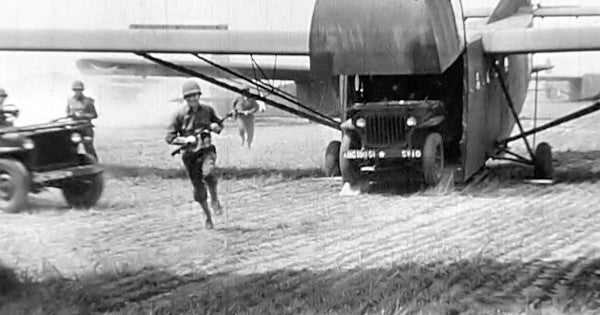 It arrived overnight and disappeared just as fast.

That's how historians have described North Carolina's Laurinburg-Maxton air base, a hub for military training during World War II. The vast majority of the United States' glider pilots were trained there, including the forces who played an unsung role in the D-Day invasion 75 years ago.

About 500 glider planes were used in the invasion, and 312 of those were from the United States. Of this number, almost all of them trained at Laurinburg-Maxton, about 90 miles east of Charlotte, said Frank Blazich, lead curator of military history at the Smithsonian National Museum of American History.

But despite the important role gliders played in transporting men and equipment, the base's contributions have been largely forgotten.

How gliders got here

The Laurinburg-Maxton air base was the largest training center for airborne military operations in the world during its heyday. The base opened in 1942, one year after the U.S. joined World War II.

The state was instrumental to the war effort through production of tobacco and textiles, but it was really the base that brought people and money here.

It made sense to have a base in Laurinburg. North Carolina has a lot of flat land, which made it easy to create airfields.

“People don't even know they're living (near) something that used to be an airfield during World War II,” said Valerie Austin, a history professor at St. Andrew's University in Laurinburg.

The land was also cheap, and it was near an established military base, Fort Bragg.

And it helped that the founder of the U.S. Army paratroopers was from North Carolina. General William Lee was born in Dunn, and he was the commander of the 101st Airborne Division, which is famous for its role in the D-Day invasion. He did everything he could to bring this base to North Carolina, Blazich said.

North Carolina was known for training glider pilots, but the Soviet Union and Germany were actually the first to use them.

The U.S. adopted gliders after they saw how successfully other countries used them. Regular planes would drag the gliders and then cut them loose. Since the gliders didn't have an engine, they didn't make sound, which made them good for stealthily transporting soldiers and artillery. And unlike other aircraft, gliders didn't require metal. They were just made out of tarp and wood, which made them attractive because metal was in high demand during the war and was needed for ships, Austin said.

But they weren't perfect.

“It's one thing to go into battle on a parachute. It's another thing to be in a plane that's designed to crash, and the only thing between you and the bullets is a very thin piece of fabric,” Blazich said. “Essentially, they don't have wheels. You're hoping that the glider pilot is able to land the glider in a controlled crash, but if your weight or balance shifts in flight, or you're trying to avoid enemy fire, it becomes a roll of the dice to land safely or not.”

And the planes had very little protection.

“All you had to do was stick up spikes, and the gliders were ripped apart when they landed,” Austin said.

Despite these risks, Blazich said the gliders “were able to accomplish their objective, which was to protect the flank of the Normandy invasion and link up with the men coming ashore.”

Austin said the use of gliders also demonstrates the “absolute commitment” of the U.S. to be successful in the war.

“People forget this is a really desperate war,” she said. “The U.S. tried everything it could to get men ready.”

A boost for Laurinburg

Laurinburg had a population of just over 3,000 at the time. While the base was there, it revitalized the community, Blazich said, especially since the area was hit hard by the Great Depression. Soldiers would go into town for entertainment, and Austin said people who lived there were happy to house them or provide them with food.

“Within a week or two, it was almost abandoned. In fact, things were left out there (in the fields),” Austin said. “People went home as fast as they could at the end of the war.”

The base was meant to be temporary because it wasn't until after the war that the U.S. realized it needed a large standing army. Because of the immense death toll and the emergence of the helicopter, gliders were obsolete by the time the Korean War started in 1950. Today, the site houses an airport.

A CG-4A Waco glider taking off from a small field after the tow rope being “snatched” by the C-47(U.S. Air Force via Wikimedia Commons)

Though the closure meant a majority of the military personnel left the area, Austin said the community continued to benefit for a while.

“There was a big growth spurt during and after the war, and it didn't just drop off. It's like a positive injection — you pull the needle out, but the injection keeps going on,” she said.

Blazich said the community should be very proud of the critical role it played in the ultimately successful operation.

“They're not large communities, but those little communities did play a large role,” he said.

Camp Mackall, located right outside Southern Pines, trained other airborne forces like paratroopers during World War II but has since been converted to special operations training.

Larry Pryce started working at the base after he finished serving in the Navy in 1981, and he and 16 other men built a replica of the exact gliders used in World War II. They found the blueprints at the U.S. Army Airborne and Special Operations Museum in Fayetteville, and it took them about a year to build.

Pryce said building the replica made him appreciate what glider pilots did even more. There's no way he'd climb up there, he said.

“Those were some brave souls that got in this thing,” he said.

The 75th anniversary of the D-Day invasion is on Thursday, June 6, and the state legislature is holding a commemoration in Raleigh.

Pryce said the replica at Camp Mackall is open to the public and has been “an inspiration to all the guys that visit the base.”

SEE ALSO: 8 Iconic Photos From The Invasion Of Normandy