For their bravery, Knuth and his fellow soldiers would come to be known as the Iron Men of Metz. 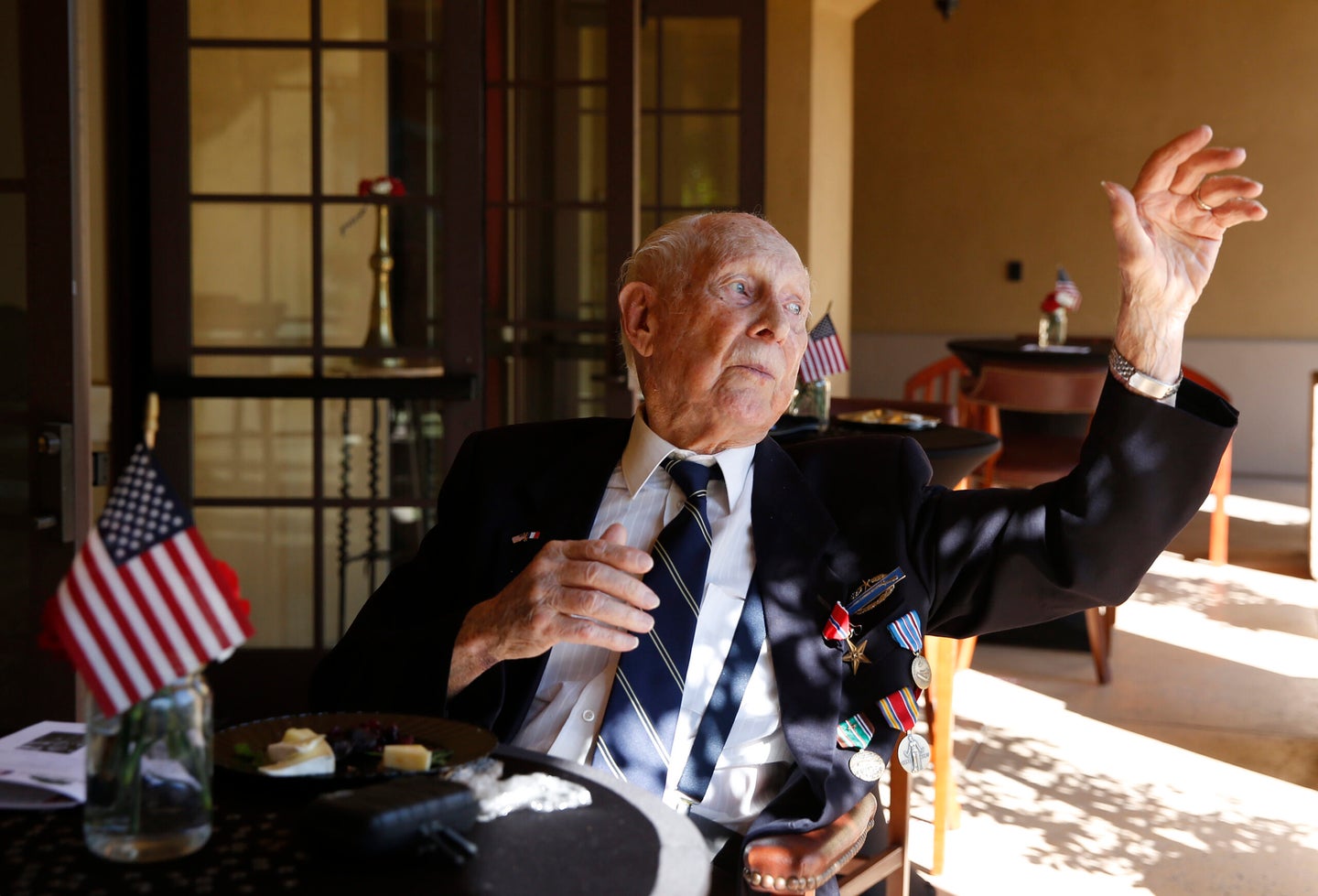 It was November 1944, and U.S. forces were fighting to liberate the heavily fortified French city of Metz from the Nazis.

When Knuth’s battalion attacked the German-held Fort Jeanne d’Arc, he and about 30 other soldiers with the Army’s 95th Infantry Division got stuck behind enemy lines, in the bitter cold, with meager supplies.

For five days, Pfc. Knuth, a 19-year-old Iowa farm boy, survived on military-issued chocolate bars called D-rations. His wet feet swelled as the trench foot that would trouble him for the rest of his life set in.

For their bravery, Knuth and his fellow soldiers would come to be known as the Iron Men of Metz.

But on a warm afternoon this week, as the 95-year-old World War II veteran was awarded one of the U.S. Army’s highest honors, he was treated as delicately as an ancient vase. Organizers of the ceremony at his Thousand Oaks retirement village, where Knuth received a Bronze Star, mounted a defense against an invisible but deadly new enemy: COVID-19.

“It was utter chaos,” Knuth recalled of the Metz standoff. “Not very many men … made it to the fort. Some were injured. Some died. Some just turned around because the fire from the Germans was so intense.”

Only a handful of people were allowed at the retirement facility’s first in-person gathering since the pandemic began. Everyone wore masks. People stood far from Knuth to pay their respects, and there were no congratulatory handshakes. Residents were encouraged to watch from their rooms on an internal television channel.

“This is a once-in-a-lifetime event. Normally, this would be standing-room only,” said Dmitry Estrin, executive director of University Village, as he stood near the few dramatically spaced out chairs in a large event hall.

For older people like Knuth, a slight man with bright blue eyes and thin white hair who leans heavily on a walker, the coronavirus has been especially devastating.

That Knuth could have an in-person celebration at University Village, where he and his 94-year-old wife, Margaret, live with nearly 500 other retirees, meant a lot. He got the Bronze Star, which recognizes meritorious service in a combat zone, in the mail a month ago and figured that would be the end of it.

Retired U.S. Air Force Lt. Col. Robert Johnson, who volunteers working with older veterans, said Knuth had long qualified for the Bronze Star but that it had been overlooked, as was common with World War II veterans.

Johnson helped Knuth apply to receive his long-overdue award, which took more than a year to arrive, and arranged the University Village event.

“This ceremony is very special,” Knuth said, wearing a black suit jacket adorned with military service medals. His voice was muffled by a black cloth mask with a University Village logo and the words, “I Wear This Mask to Protect You.”

Related: The decorated WWII vet who flew dozens of deadly missions in a balsa wood plane

Over the last six months, life has changed a lot for the Knuths.

He was an avid swimmer who hit the pool five times a week to maintain circulation in legs badly damaged by the cold, wet weather during the Battle of Metz. He was devastated when the pandemic closed both the University Village pool and gym for several weeks, and he now has to make appointments to exercise.

He and Margaret don’t socialize much, eating in their villa instead of in the dining hall with friends. They don’t see their six children as often. And they worry about catching COVID-19 during doctors’ appointments.

“It’s stressful,” Knuth said. “If you go out, you have to worry about, ‘Am I going to come back with the virus?’”

There have been a few cases of COVID-19 among residents on the sprawling campus, which includes an adjacent skilled nursing facility called OakView Health Center, Estrin said. But residents have been “great partners” with the safety protocols and have been successful at avoiding outbreaks, he said.

Tuesday’s Bronze Star ceremony was a ray of hope after so many stressful months. Attendees said it was important to honor World War II veterans, whose numbers are dwindling.

At the 70th reunion of the Iron Men of Metz at Ft. Sill, Okla., last year — where Knuth was awarded the French National Legion of Honor Medal — there were only seven veterans. Fewer show up for each gathering, Knuth said.

Roldan knows only three World War II veterans. During the pandemic, he said, he has been able to speak to them only by phone, so it was especially meaningful to attend Knuth’s ceremony in person.

Maj. Gen. Laura L. Yeager, commander of the 40th Infantry Division and the first woman to lead an Army infantry division, said she “jumped at the opportunity” to present Knuth his Bronze Star. Coming three quarters of a century after his wartime service, she said, the award was “obviously overdue.”

“With all we’re dealing with in this country right now, this is a nice break,” she said.

Wearing a mask as he sat at the front of the event hall, Knuth smiled as speakers — who cleaned the microphone between each speech — praised his valor and the full life he lived after the war. He was an engineering professor who taught for 35 years at UCLA, wrote more than 100 scientific papers and traveled the world with Margaret.

“We think we’re living in trying times,” Yeager told the audience. “And certainly the combined effects of pandemic, wildland fires, economic uncertainty, racial disparities and all the tensions that we face today are definitely rocking the state and the nation. But with reflection, we know that we have been through much worse.”

Related: The soldiers who inspired ’12 Strong’ are honoring D-Day heroes with a special parachute jump

Citing the old adage that when the going gets tough, the tough get going, she said Knuth “never stopped making the world a better place.”

“Professor Knuth, you are tough,” she said. “You are wicked smart. You are a lifelong learner, an adventurous traveler, accomplished genealogist, recognized researcher, prize-winning author, professor emeritus, mentor to others, dad, husband. You are an American hero.”

Knuth pulled down his mask to smile as Yeager, still wearing hers, pinned the medal to his jacket. She took hers off for a few seconds to take a photograph, but not without first stepping away to keep a safe distance.

Knuth’s daughter-in-law, Carolyn Nicholson, 69, said she was delighted to celebrate him in person. They haven’t seen each other much during the pandemic, and she drove more than two hours from Yucca Valley to attend.

“He’s everything a Bronze Star should be,” Nicholson said. “A wonderful man. Great intellect. A great inspiration to our family.”