The enduring appeal of WWII reporter Ernie Pyle, who died on the job 75 years ago this week

I like to reread Ernie’s dispatches for many reasons. One is they provided hope. He wouldn’t stand down, and everybody knew it. 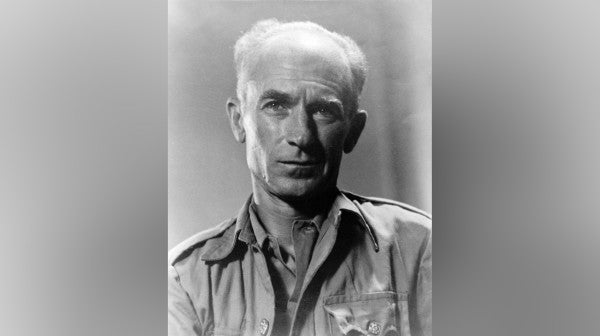 How did Ernie do it? How did he lift up an entire country when its future was in doubt?

The answer is no mystery. He combined the greatest talent with the strongest work ethic to write six columns a week about the soldiers and sailors fighting to win World War II.

I speak of Ernie Pyle, who’s still the most famous war correspondent of any generation. A Hoosier by birth, Pyle lived in Albuquerque when he wasn’t reporting from foxholes or aboard ships.

His columns from battlegrounds reached 13 million readers stateside through the Scripps-Howard newspaper chain. Pyle personalized world war by reminding everyone that the boys in battle were boys from their town.

He wrote about their lives and, in many instances, their deaths. He was on the job until he took his last breath.

Saturday marks the 75th anniversary of Pyle’s death. A Japanese machine-gunner killed him in a spot west of Okinawa.

The anniversary is a milestone worth marking in these times, which are trying but not as dire as the 1940s, when tyrants moved to seize control of the planet.

World War II followed the Great Depression. The soldiers Pyle wrote about were used to hardships and sacrifice.

Pyle was, too. What stands out all these decades later is how well he chronicled war from the front lines in impossible conditions. With bullets flying, Pyle armed himself only with a notebook, pencils and a portable typewriter.

He had no phone, no computer, no legmen and no editor to help him challenge military censors if they excised the names, hometowns or street addresses of the soldiers he wrote about. Pyle liked to include all those details in his column.

He saw his job as putting a human face on the war. Others could cover the big picture and the politics. His focus was the ordinary soldier in extraordinary times.

In 1997 I found and interviewed a handful of the soldiers Pyle had written about. They all told of how a mention in his column could fill a town with pride. Pyle wasn’t a booster, but he could build morale.

'He could really empathize'

One of the soldiers I spoke with was Kenneth Brown of Ellwood City, Pa. He was an airman on a B-26 crew in England when he met Pyle.

“The most difficult thing to put into the English language is the lonesomeness of war, the empty bunks at night. Ernie captured that,” Brown said.

Pyle could descend into hell’s fire and then write like an angel.

“Ernie really took the reader with him, into the muddy fields and into the air,” said Brown’s pal, Phil Scheier of Seattle. “He was there, so he could really empathize with us. He brought the readers right into that B-26.”

Pyle could have returned from the war well before 1945. A year earlier, he had won a Pulitzer Prize for his dispatches from battlegrounds.

At age 44, he was twice as old as many of the sailors he followed to the Pacific.

Pyle was as tired of war as anyone. But he never lost his drive to cover it.

“The front does get into your blood, and you miss it and want to be back,” he wrote to a friend. “Life up there is very simple, very uncomplicated, devoid of all the jealousy and meanness that float around a headquarters city, and time passes so fast it’s unbelievable.”

In that same letter, he made a rare reference to the dangers of his work: “I try not to take any foolish chances, but there’s just no way to play it completely safe and still do your job.”

That’s a line that resonates today for doctors, nurses, police officers, pharmacists, supermarket employees and many more who hold down essential jobs in the coronavirus pandemic.

It poses the greatest threat since World War II, both to the public’s health and the economy. Millions in the United States have been thrown out of work in less than a month.

Like the war Pyle covered, this pandemic is unpredictable. The dark hours and dismal weeks have no known expiration date.

I like to reread Ernie’s dispatches, even the ones laden with death, for many reasons. One is they provided hope.

He wouldn’t stand down, and everybody knew it. They would have to kill him before he quit.