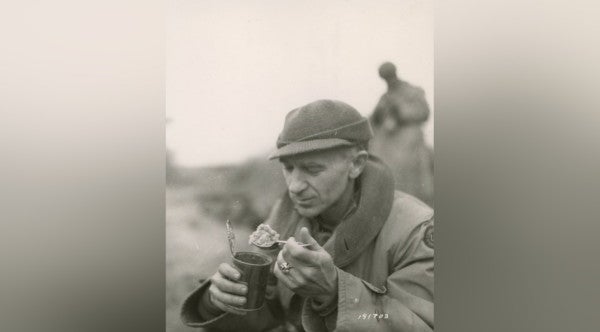 “Aren’t you Ernie Pyle?” the man asked. He was an officer—a medic. He held his helmet at his side.

Ernie looked up from his champagne cocktail in the basement bar of the Hôtel Scribe, a storied establishment in central Paris that had been the headquarters for Nazi propagandists—until it was “liberated” by a gaggle of Allied war correspondents.

“I just want to thank you,” the medic told him. “You’ve done some great things for us in your column. I read it whenever I can.”

Ernie was tired. Tired of the war. Tired of the whole terrible business. He was dirty, too, after weeks of following the infantry through the bloody hedgerows of Normandy. The polished table he and a few other grimy correspondents had posted up at in the basement of the hotel made his dirty uniform and boots seem even more so.

With a grin he broke the bad news.

“You won’t be reading it much longer,” he told the medic. “I’m going back to the States in a couple of days.”

By the end of August 1944, Ernie had spent 29 months total overseas. He estimated that of all those months, he’d been on the front lines for at least 12. He had survived a strafing from German Stukas in North Africa, a bombing in Italy that buried the bed he had just crawled out of in hundreds of pounds of rubble, and was nearly blown to bits by errant Allied bombs during the breakout from Normandy.

“I’m leaving for one reason only—because I have just got to stop,” he told his more than 13 million readers. “‘I’ve had it,’ as they say in the Army. I have had all I can take for a while.”

“I’ve been immersed in it too long,” he continued. “My spirit is wobbly and my mind is confused. The hurt has finally become too great.”

There was no need to worry, he assured the folks at home. After a little rest in the New Mexico sunshine with his wife, Jerry, at his side, Ernie was sure he’d be restored enough in mind and body to return to the front.

“It may be that a few months of peace will restore some vim to my spirit,” he said, “and I can go war-horsing off to the Pacific.”

When I met Thomas Brennan back in 2016, he was in the middle of a Kickstarter campaign aimed at getting his idea for a nonprofit newsroom off the ground. He called it The War Horse, and its mission, he told me, was to help the American people better understand military service, what war was really like, and what lasting impacts war would leave on our troops and their families.

“That’s where the name comes from,” Thomas told me when we started chatting over social media about me donating some copies of See Me for Who I Am, a collection of essays I edited in 2016 that were written by student veterans at the University of Wisconsin-Stevens Point, as an incentive for people to donate to the campaign.

A war horse, I learned later—after I began researching Ernie Pyle’s war reporting for a book I’m writing about him—is a soldier, politician, or athlete who has fought many campaigns or contests. I rather like the Urban Dictionary’s definition: A war horse is “someone who persists at an activity … despite hardship and age, maybe when they should have retired or given up a long time ago.”

After three and a half months at home, Ernie readied himself for another trip into the breach. “I’m certainly not going because I’ve got itchy feet again,” he said, “or because I can’t stand America, or because there’s any mystic fascination about war. … I’m going simply because there’s a war on and I’m part of it. …

On March 31, 1945, the day before American soldiers and Marines invaded the Japanese island of Okinawa, Ernie wrote a quick letter to Jerry promising her that this invasion was undoubtedly his last.

“I’m on another invasion,” he wrote, according to The Associated Press. “I never intended to, but I feel that I must cover the Marines, and the only way to do it honestly is to go with them. So here I am. But I promised Max Miller, (author and naval officer) and I’ve promised myself, and I promise you that if I come through this one I will never go on another one.”

After spending a couple weeks with the Marines on the northern half of the island, Ernie took a boat to the tiny island of Ie Shima, off the western coast of Okinawa, so he could hook up with the Army’s 305th Infantry Regiment there.

On April 18, just after 10 in the morning, Ernie was on his way to the regiment’s new command post with Lt. Col. Joseph B. Coolidge when the zipping and pounding of machine gun fire erupted from a ridge on the side of the road, The St. Petersburg Times reported.

The brakes squealed, the Jeep’s tires skidded into the sloppy and potholed path, and Ernie and Coolidge leapt into a ditch to shield themselves from the barking gun.

Once the sounds of war were silenced, Ernie tipped up the front of his green-and-yellow camouflage helmet and raised his head above the ditch’s berm.

It was the last thing he ever did.

His string had finally run out. He was 44 years old.

News of Ernie’s death spread quickly. Dwight D. Eisenhower, the supreme commander of the Allied forces in Europe, was devastated.

“The G.I.s in Europe—and that means all of us—have lost one of our best and most understanding friends,” he said.

Omar Bradley, whom Ernie called “a great general in every sense of the word,” said that he had “known no finer man, no better soldier” than Ernie.

Perhaps most touchingly, United Press reported that the young soldier-cartoonist Bill Mauldin said from Rome that, “The only difference between Ernie’s death and the death of any other good guy is that the other guy is mourned by his company. Ernie is mourned by his Army.”

He was so beloved, according to the president of Indiana University, where Ernie attended college, because he was a “discerning reporter, an unexcelled interpreter of the minds and hearts of men in peace and in war, and an advocate for the rights of the soldiers in the ranks,” The Indianapolis Star reported.

“It was almost as if,” Victor Peterson wrote of the soldiers’ reactions in The New York Times, “one voice said: ‘He was a swell little guy, just one of us. He saw the war as we saw it. He was the only one who gave a damn about the doughfoot.’”

With each passing year since Ernie’s death, it seems there is less and less reporting like his—reporting that puts a human face on the wars fought by the United States and its allies.

There are, it seems to me, several reasons for this. First, the military has greatly reduced opportunities for reporters to embed with troops downrange. As veteran and journalist Will Bardenwerper wrote for the Princeton Alumni Weekly earlier this year, “There was some degree of transparency in the early years of the ‘War on Terror,’ when there were hopes that it would be resolved quickly and successfully.”

Related: The enduring appeal of WWII reporter Ernie Pyle, who died on the job 75 years ago this week

Today, however, after nearly two decades of mostly indecisive fighting all around the world, “neither policymakers nor the military seem eager to advertise the tragic shortcomings of an unsuccessful foreign policy with bipartisan fingerprints.”

Second, from the early days of the Great Recession that began in 2008, American newspapers cut more than 50% of their newsroom staff. At the same time, from 2004 to 2019, around 1,800 newspapers simply closed.

According to a 2019 PEN America study on the consequences of such declines, “Government officials conduct themselves with less integrity, efficiency, and effectiveness, and corporate malfeasance goes unchecked.”

Things have only gotten worse since the coronavirus pandemic arrived this past spring.

“When the coronavirus pandemic arrived, the immediate economic impact on news organizations could be felt worldwide,” writes media columnist Margaret Sullivan for The Washington Post. “In the United States and elsewhere, new rounds of layoffs or pay cuts have devastated the very local newsrooms that are making themselves more vital than ever to their readers by covering the public health emergency.”

Third, even the newsrooms that are still around don’t always have robust enough budgets to send correspondents into war zones. Instead, many outlets have come to rely on freelancers who don’t enjoy any of the security, protections, or support that used to be afforded to the likes of Ernie Pyle.

Since 1992, 1,454 journalists have been killed in conflicts around the world, according to the Committee to Protect Journalists. Of those, 266 were freelancers. An especially deadly year for freelancers was 2013, when 24 were killed, mostly in Syria.

But above all else, what Ernie did was not easy. Countless others who were inspired by Pyle and aspired to do what he did can attest to this. In a recent interview I did with famed correspondent Joseph L. Galloway, co-author of We Were Soldiers Once…and Young, he told me that he has grown to hate giving talks at journalism schools around the country.

“At some point in the talk,” he says, “one of the students will invariably raise their hands and ask me how they can do what I did. And I have to tell them that they can’t. They just can’t.”

Two days after Ernie was killed, the professional journalistic fraternity Sigma Delta Chi announced that he was to receive—for the second time—the Raymond Clapper Memorial Award for war correspondence. John S. Knight, the publisher of Knight newspapers, spoke for the awards committee when he said that Ernie was selected because of his excellence in “human interest, down-to-earth reporting of the war.”

It was difficult work that needed to be done. And Ernie was the best there was.

“Pyle had the gift,” Knight said, “of bringing the horrors and realities of war close to home.” That old war horse’s articles from France and the Pacific, Knight concluded, “have been magnificent.”