Everything You Know About The Marine Corps Uniform Is Wrong

Most Marines, even in their sleep, can recite the historical significance behind each part of the Dress Blue Alpha uniform... 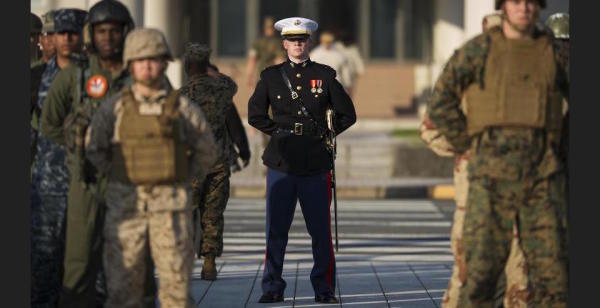 Most Marines, even in their sleep, can recite the historical significance behind each part of the Dress Blue Alpha uniform — the attire they’ll be wearing at the Marine Corps Birthday Ball.

Each decorative piece tells a story profoundly stitched into the heritage of the Corps just as it is stitched into the fabric of the “blues.” But the legends that live on, draped over the shoulders of these “soldiers of the sea,” often have very little or no basis in fact.

“Marines really love their history, and they should want to know it as accurately as possible,” Owen Conner, the uniforms curator at the National Museum of the Marine Corps, told Task & Purpose in an interview.

“Some of the romantic stories we hear about the history of Marine uniforms are true, some are half true, and some of them are very easy to debunk altogether,” said Conner, of Fredericksburg, Virginia.

One of the half-true legends, he said, is the origin of the “blood stripe.” As the story goes, the red stripe worn on the trousers of officers and noncommissioned officers commemorates the blood Marines shed storming the castle of Chapultepec in 1847.

“The legend would have you believe there was no stripe on the trousers until after the Mexican War, but that clearly isn’t true,” Conner said. “The stripes definitely vary over the years and take on different significance, but they do predate the Mexican War.”

In fact, Marine Corps trousers from as far back as the 1790s had red welts and piping down the outer seams.

The trouser stripe has gone through many changes over the years. It likely traces its most direct origins to the Civil War-era regulations of 1859. But, over time, it grew from a decorative red welt to a broad scarlet stripe. The stripe Marines wear today originated in the 1890s — some 40 plus years after the Battle of Chapultepec.

Marines can at least say it’s kind of true that the blood stripe honors the noncommissioned officers of Chapultepec because decades of repeating the legend have firmly embedded that battle into the legacy of the Corps.

But the history of the leather stock collars worn by Marines is straight nonsense.

Issued in 1776, the famed “stocks” were the high-leather collars for which Marines earned them the nickname “leathernecks.” Though the Corps did away with them about 100 years later, Marines retained the name Leathernecks and believe the high, stiff cloth collar on the modern dress uniform is meant to serve as a reminder of their heritage.

Retired Sgt. Maj. James Snyder, an 82-year-old veteran of the Korean War and Vietnam, who served for 28 years, and a native of Dayton, Ohio, shakes hands with Marines dressed in uniforms from periods throughout Marine Corps history during the 2013 Marine Corps Base Hawaii birthday pageant at Dewey Square, Nov. 8, 2013.Lauren Katzenberg

The current collar is not even close in height, design or discomfort level to the original collar, according to retired Marine Col. Robert H. Rankin, who wrote the book “Uniforms of the Marines.”

“[The stock] completely encircled the neck and was high enough to make the wearer keep his chin up at all times,” he writes.

After wearing this device for a period of time, the Marine could not lower his head even after he removed it, according to Rankin, one of the most established writers on Marine uniform history.

And it wasn’t just a Marine thing. Uniforms from other branches of service also included the collar, which was more affordable because the fabric didn’t have to be replaced as often as cloth.

The legend of the collar is so treasured and guarded by the Corps that one Marine historian would only speak critically of it on the condition of anonymity.

“Swords you came into contact with at that time were meant to break bones, not to cut skin,” the source explained. “The leather stock was less than an eighth of an inch thick – that’s not going to help much if someone is swinging a cutlass at your neck.”

The leather collar just kept your head up and it was the fashion of the day.

Fashion does, in fact, play a large role in the design of military uniforms. Throughout history, nations who succeeded in wars tended to set the fashionable uniform styles for others, which is why the Marine Corps borrowed the quatrefoil from the French sometime shortly before the Civil War (and a long long time after the Revolutionary War).

Many nations at the time were adopting French military styles as a result of the French army’s success in the Italian War of 1859–1861, Conner said.

This fact completely dispels the legend of the quatrefoil, which claims the design originated in the Revolutionary War so friendly sharpshooters atop ship riggings could distinguish Marines from the enemy.

“The lore of the Corps is that officers fastened the ropes to their hats,” Conner added. “The big catch of the legend is that, back then, officers wore Napoleonic style chapeaus. Because of the way those hats were shaped, nothing could have been fixed to them.”

Rankin supports the same idea as Conner, adding that the British Marines wore bright red coats during the Revolution, and could be easily distinguished from American Marines regardless of their headwear.

But hey, isn’t it okay to buy into a little legend?

“The lore is part of the Marine Corps history, whether every story is real or not,” Conner said. “It is a way of embracing the Marine legacy, and inspiring people to want to become Marines.”