Jackie Huber was one of the few, but she never felt particularly proud as a woman Marine. 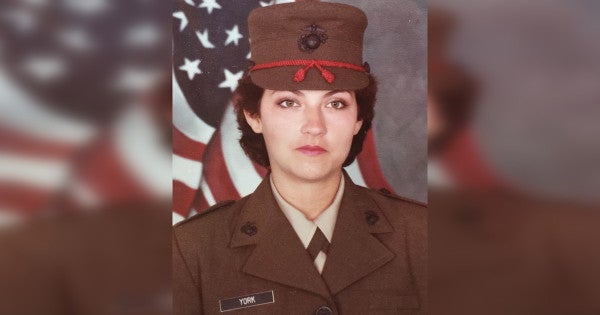 Jackie Huber was one of the few, but she never felt particularly proud as a woman Marine.

She spent 20 years in the Marine Corps, from 1984 to 2004, and rose from the enlisted ranks to chief warrant officer. She worked in MISSO, the Manpower Information System Support Office, entering data about service members at installations on the East and West coasts. She volunteered for the same duty in Somalia as part of Operation Restore Hope and lived in a sand-filled camp that smelled of dirt and death.

Huber said it wasn't cool to be a Marine during most of her tenure, which was before the days military members were thanked for their service. Some of the men she worked with made it clear they looked upon women as more trouble than they were worth—unless they needed someone to sleep with, Huber said.

Huber, who lives in Stafford County, is glad the tide has shifted.

The 2017 revelation that male Marines posted nude photos of female Marines online and made lewd and violent comments about them brought charges to those involved. Huber believes some of the injustices she experienced are no longer part of the Corps.

As a result, the 53-year-old is doing what she can to support other service members as she embraces her status as a retired Marine.

“It was awful at times, but there's this pride of being a Marine that comes from having earned it, and you can't take that away,” she said.

Huber pursued her passion—photography—after she left the Corps and moved to the Fredericksburg area in 2005. She worked locally with another photographer before starting her own business in 2011, calling it Bellawood Photography.

The name suits on several levels. She has a dog named Bella, and her family lives in the woods of Falmouth, but she's also giving a nod to Marine lore. After the World War I Battle of Belleau Wood in France, Germans called Marines “devil dogs” because of their tenacious fighting.

Huber has donated her photography services to Semper K9 Assistance Dogs, a Woodbridge group that rescues dogs from shelters and trains them for disabled service members. She plans to devote one day a month at her studio, off State Route 3 in Fredericksburg, to providing free headshots for all service members transitioning into civilian work.

And, her studio is a collection site for Toys for Tots, the annual holiday effort by the Marine Corps Reserve. In the late 1980s, she posed for a national campaign poster promoting the effort, alongside comedian Danny Thomas.

“When you have someone who understands the military culture and lifestyle, it helps keep our veterans at ease because they know the person has been there, too,” said Amanda Baity, who runs the Semper K9 program with her husband, Christopher, a former Marine dog handler. “I can tell she truly has a caring heart and wants to give back.”

Jackie Huber, standing on the left, volunteered to serve in Somalia in 1992. Women Marines had to wait on a plane as officials readied 'facilities' for them in the bedraggled (Courtesy via The Free Lance–Star)

Amanda Baity has met several women who were reluctant to advertise their military status.

“I see that a lot,” she said. “Maybe it's a stigma and they don't want to be defined as that.”

The Marine Corps has the fewest number of women of any branch in the military. About 8 percent of its enlisted ranks and officers are female—a percentage that's at least twice as high in the other services, according to the Department of Defense.

Huber's best friend, Carrie Lynch of Stafford, also served in Marines for 20 years, and the two have talked about their experiences. Lynch followed her father into the Corps and said her service didn't always include rainbows and unicorns, but was still “the best thing that ever happened to me.”

“I don't want to say they were seen and not heard, but when she came in, women didn't speak up as much” because that's how they were raised, Lynch said. By comparison, she said, women of her era had no trouble pointing out problems and expecting solutions.

Also, there are plenty of people who give the impression that “to be a real Marine, you have to fight the battle,” Lynch said.

She believes her friend is finally starting to see that everybody contributes, whether they're on the field of combat or not.

“She doesn't give herself enough credit sometimes,” Lynch said, “but she's been there, she's been through the trenches, and she is an amazing woman.”

As for combat, Huber knows that at 5 foot, 2 inches, she'd never be strong enough to carry a fellow fallen Marine who could be twice her weight and a foot taller. She faced that scenario in training once.

Focusing on her career

Rachel Huber, the third of Jackie Huber's four children, enthusiastically tells everyone she knows of her mother's service and even reminds her mom to pluck up her courage when she's feeling down.

“There's no crying in the Marines,” she tells her mother.

Huber's husband, James, is also a retired Marine who's had several combat deployments. She's grateful for his encouragement as she's found her second career as a photographer.

Her studio is full of headshots—not glamour portraits of models, but attractive images of everyday people. One is her mom, who lived with Huber for more than a decade and took care of the children when Huber and her Marine husband were called away on duty or training.

When she has a camera in front of her face, Huber blocks out everything else around her. She doesn't feel hunger, pain or fatigue, but focuses only on her objective as she concentrates on capturing “the essence” of a person.

“It puts me in a difference zone,” she said. “I see that moment and I have to have it.”

Some might say she's as determined as a devil dog.

SEE ALSO: I Tried To Make Women Marines Tougher. It Was The Hardest Fight Of My Career

WATCH NEXT: A Historic Uniform Change For Female Marines