The violence that erupted in Charlottesville, Virginia, over the weekend, in which one woman was killed and dozens more injured,... 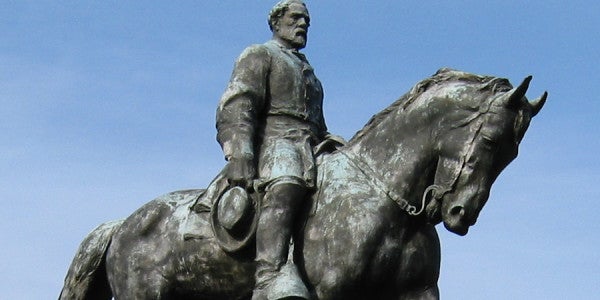 The violence that erupted in Charlottesville, Virginia, over the weekend, in which one woman was killed and dozens more injured, stemmed from a protest led by white nationalists over the proposed removal of a statue of Confederate Gen. Robert E. Lee.

Debates about the removal of Confederate statues have been ongoing for years, and opponents of removing the monuments oftendecry such proposals as an attempt to erase history.

After the Civil War, Lee received several letters requesting support for the erection of Confederate memorials, according to Horn.

In June 1866, he wrote that a monument of one of his best generals, Thomas “Stonewall” Jackson, wasn't “feasible at this time.”

In December of that year, he wrote of another proposed Confederate monument: “As regards the erection of such a monument as is contemplated, my conviction is, that, however grateful it would be to the feelings of the South, the attempt, in the present condition of the country, would have the effect of retarding instead of accelerating its accomplishment, and of continuing if not adding to the difficulties under which the Southern people labor.”

Not only did Lee oppose Confederate monuments, “he favored erasing battlefields from the landscape altogether,” Horn wrote.

He even supported getting rid of the Confederate flag after the Civil War ended. He didn't want it flying above Washington College, of which he was president after the war.

“Lee did not want such divisive symbols following him to the grave,” Horn wrote. “At his funeral in 1870, flags were notably absent from the procession. Former Confederate soldiers marching did not don their old military uniforms, and neither did the body they buried.

According to Horn, Lee's daughter wrote, “His Confederate uniform would have been 'treason' perhaps!”

“Lee believed countries that erased visible signs of civil war recovered from conflicts quicker,” Horn told PBS. “He was worried that by keeping these symbols alive, it would keep the divisions alive.”