Editor’s note: An earlier version of this story was originally published in 2017. Have you ever risked life and limb … Continued 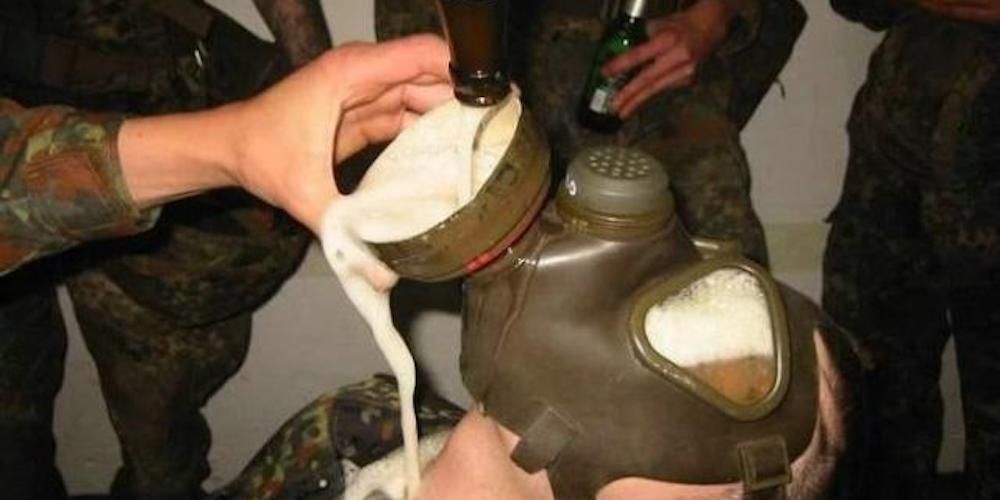 Editor’s note: An earlier version of this story was originally published in 2017.

Have you ever risked life and limb to win a barroom bet, your veins so full of liquid courage that some harebrained feat of strength and derring-do actually seemed like a good idea? If you’re anything like those rambunctious partygoers swimming in Natty Light who sacrifice their bodies for the amusement of their fellow revelers, there’s a chance you’ve probably uttered this phrase: Hold my beer… and watch this.

“Hold my beer” has been the battlecry of would-be American daredevil for decades, a distinctly southern refrain popularized by comedian Jeff Foxworthy’s 1993 “You Might Be a Redneck If …” and a staple of Internet culture since the advent of the viral “fail” videos that made YouTube a place worth visiting. Almost every who’s ever served in uniform knows a “hold my beer” moment when they see one: that moment of idiotic one-upmanship in which the safety of one’s lukewarm can of swill is more assured than his bodily survival.

Well, the entire internet discovered the well-worn war-cry of the booze-filled adventurer… and, obnoxiously, used it to death, thanks to recent PR fuck-ups by Pepsi, White House Press Secretary Sean Spicer, and United Airlines. But few know the story of the ultimate “hold my beer” moment — a moment that involved a New York bar, a single-engine Cessna aircraft, and a Marine veteran named Thomas Fitzpatrick.

Fitzpatrick, known as Tommy Fitz to his drinking buddies, was awarded a Purple Heart for his service during the Korean War. But it was his barroom antics that minted his reputation for bravery.

In 1956, Fitz was a New Jersey steamfitter who hung around at the local bars across the Hudson in his childhood neighborhood, Manhattan’s Washington Heights. One evening, on a barroom bet, he stole a plane and landed it in the Upper West Side, right in front of the bar where he’d been drinking.

Two years later, he did the exact same thing again, according to a2013 New York Timesaccount of the incident:

According to the Times, Fitzpatrick had attempted the first flight after a drinking buddy challenged him to make it from New Jersey back to Washington Heights in just 15 minutes, but the second flight came “after a bar patron refused to believe he had done the first one.”

“Tommy had a crazy side,” a childhood friend told the Times in 2013. “The whole group of them, my brother’s friends, were a wild bunch.”

After his second flight, Fitzpatrick even gave New York police officers a typical “hold my beer” statement: It wasn’t his fault! “I never wanted to fly again,” he said, according to a Eugene Register-Guard story from 1958. “It’s the lousy drink.”